The Onion gets a star-studded new competitor

With contributions from Mike Myers and others, the Final Edition wants to be "The Daily Show" for the Web 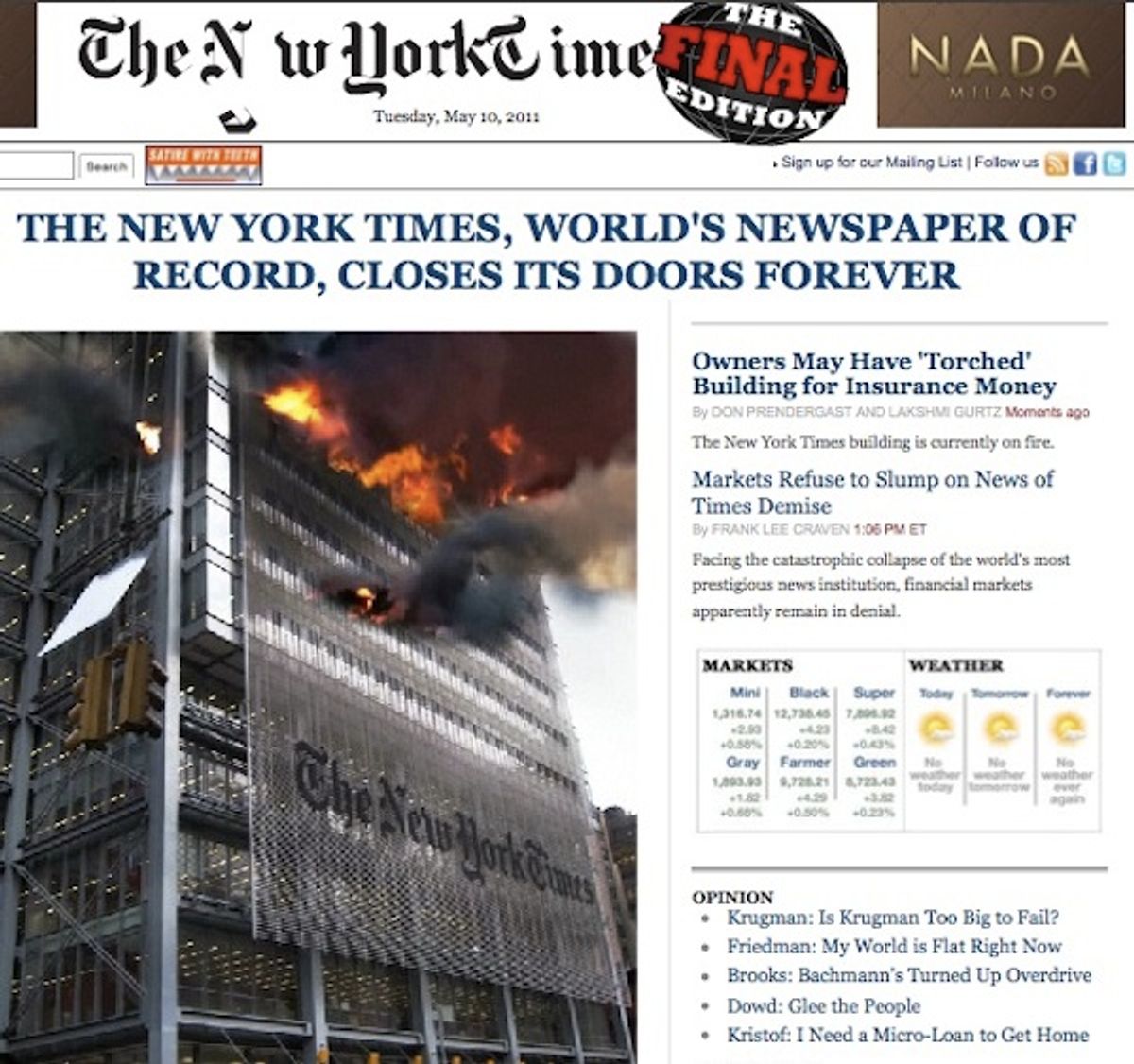 I'm talking to British satirist Tony Hendra about the launch of his latest effort, and all I can think of is "This Is Spinal Tap." Not that Hendra's new site, the Final Edition, bears any resemblance to Christopher Guest's breakout film (except in the sense that they are both very deft parodies), but I still can't shake the feeling. Hendra's prolific résumé includes jobs like editor in chief for Graydon Carter's Spy magazine, the first editor ever to be hired for National Lampoon, and performing with Monty Python's John Cleese and Graham Chapman in a Cambridge revue.

Oh, and in his spare time he dabbled in a New York Times parody book with George Plimpton called "Not the New York Times," and yes, played Spinal Tap's manager Ian Faith in the 1984 film. I knew his voice sounded familiar.

At first TheFinalEdition.com could easily be mistaken for a 2.0 continuation of "Not the New York Times." The website's front cover is a mock-up of the Gray Lady's, with a blaring headline, "THE NEW YORK TIMES, WORLD'S NEWSPAPER OF RECORD, CLOSES ITS DOORS FOREVER." (A smaller article below pouts, "Markets Refuse to Slump on News of Times Demise.") Then there are the front-page spoofs of the paper's columnists, like a Paul Krugman send-up titled "Is Krugman Too Big to Fail?" and a Bill Kristof piece, "I Need a Micro-Loan to Get Home." But Hendra wants you to think of the Final Edition in broader terms than just one publication.

"We see the Final Edition as a wonderful opportunity to bring to the Internet something other than frat and cat humor, which, with some notable exceptions, is very lowbrow," said Tony over the phone. "Grown-up, funny, smart satire writing, something that knows what it's talking about, is currently absent on the Internet."

Tony cites "The Colbert Report" and "The Daily Show" as examples of the type of satirical news humor that the Final Edition will bring to its audience, but when I mention the site's closest competitor, the Onion, he hedges on the comparison. "I think we're very much in the same family. But they're doing their own thing, and the news is encapsulated in this world they've created. I'm trying to do a more up-to-the-minute, edgier, one-on-one satire," Hendra tells me.

Another competitive edge given to the Final Edition comes in the form of heavyweight names: Comedian Mike Myers is doing a column about Rachel Maddow, NPR's "Wait Wait ... Don't Tell Me" host Peter Sagal will also be writing for the site, as well as "Social Media Stratocaster" Alex Blagg.

After today's launch, the site will ditch the front page concept of a New York Times mock-up, and according to the site's press release, will "evolve into its permanent form, delivering a sharp, satirical spin on anything that can conceivably be described as news -- from media foibles and political high jinks to sports meltdowns and celebrity train wrecks."