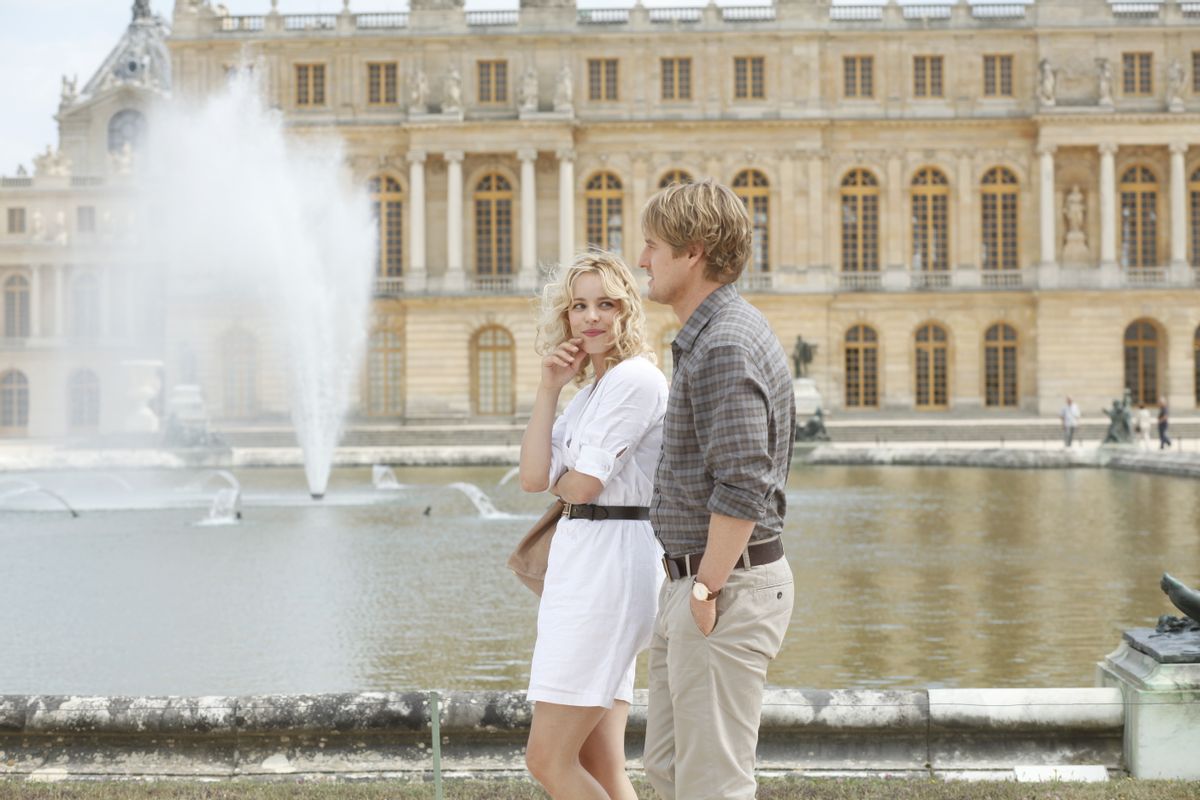 CANNES, France -- Sunlight is glistening off the distant blue-and-white breakers, and vaguely famous-looking young women with impossibly high heels pause in their stroll down the Boulevard de la Croisette to watch workmen tacking down the red carpet outside the Palais des Festivals. It is time once again for the beautiful, the pseudo-beautiful, the brooding and the parasitical to reconvene on the Côte d'Azur for global cinema's greatest carnival. The Cannes Film Festival, whose 64th edition launches on Wednesday evening with the premiere of Woody Allen's "Midnight in Paris," does not command the same level of worldwide attention as the Oscars and probably never did. But as an annual celebration of the movies' marriage of art and commerce -- and as a trashy, glamorous, nosebleed-snobbish and ultra-populist spectacle -- Cannes remains unlike any other event on the planet.

As is customary, this year's Cannes lineup features the world premieres of enormous Hollywood productions aimed at an audience in the hundreds of millions, intimate personal films that may almost literally never be seen again, and nearly everything in between. Early on Saturday morning, the horde of journalists will pack into the Grand Théâtre Lumière, the legendary main auditorium here, to see "Pirates of the Caribbean: On Stranger Tides," with Johnny Depp and Penélope Cruz, a movie we could have seen at home with less glitz but a great deal more comfort. A couple of days later we'll do it again for Terrence Malick's long-awaited "The Tree of Life," with Brad Pitt and Sean Penn (which was initially expected at Cannes last year).

Those two films may well be the biggest news events of the next week -- but in all honesty it isn't those movies that make Cannes so great. It's the fact that I can see those movies and also see, say, the newest film from little-known Japanese director Naomi Kawase (a personal fave) or "Martha Marcy May Marlene," the debut of young Canadian director Sean Durkin. There seems almost no end to the potential riches on the Riviera beachfront this spring; picking just 10 films to spotlight in advance has been tough. (There, I've gone and jinxed it.) I've selected five movies with reasonably high star quotients, name directors and obvious audience appeal, and five more that are just as exciting (to me, anyway) but are flying a bit more under the radar, at least from the perspective of ordinary American moviegoers.

Of course this is all guesswork. Here's what we actually know, so far: 1) It might sound lame to open Cannes with a 21st-century Woody Allen movie. OK, it actually is lame, but one of the most inexplicable things about Europe is how much people here love them some Woody. I guess it's part of the love-hate relationship with America that plays such an enormous role in this continent's cultural life, but even in those terms it doesn't make much sense. Anyway, good, bad or indifferent, the Woodman's cinematic postcard to the French capital will be a huge deal here. 2) Some things proclaimed here as masterpieces will be ignored by the world, while other things mocked by the Cannes critics will make zillions. 3) When you hear about a movie here that provokes booing and widespread walkouts? Seek it out and see it, when you get the chance; it's probably good. 4) I will spend almost two weeks in a beach resort adjacent to one of the world's great food and wine regions, and will dine largely on sandwiches and pizza and come home without a tan. The suffering! It's hard to bear sometimes.

The Tree of Life A personal, family-based film that stars Brad Pitt and Sean Penn and is also, somehow, about the evolutionary history of life on earth. A beautiful if utterly inscrutable trailer. A legendary director (Malick, still best known for "Badlands" and "Days of Heaven") viewed by some as a visionary master and by others as a pretentious ass, whose filmmaking career appears half-paralyzed by indecision and procrastination. These are the mysterious ingredients of "Tree of Life," which is almost guaranteed to be a major debate topic here.

Melancholia Any Lars von Trier film is guaranteed to be a media circus at Cannes, and whether you like the guy or hate him, give him credit: He gets people to pay attention to small-audience art-house movies, and that's not easy. "Melancholia" appears to be an odd, Trier-ian blend of the country-house wedding movie with a "Donnie Darko"-style story about the end of the world, and presumably won't horrify and galvanize audiences quite the way "Antichrist" did two years ago. No genital mutilation! A box-office plus but a P.R. minus! An intriguing transatlantic ensemble includes Kirsten Dunst, Kiefer Sutherland, Charlotte Gainsbourg and Charlotte Rampling.

Drive Take cult director Nicolas Winding Refn, whose last two movies ("Bronson" and "Valhalla Rising") established him as a prodigious, visionary, almost uncontrolled talent while barely making a nickel. Add rising star Ryan Gosling of "Half Nelson" and "Blue Valentine." Mix with an implausibly large budget and some fast cars and you have an action-adventure movie that's almost certainly the most unlikely competition entry at Cannes this year, and an object of worldwide yearning by film geeks. There doesn't seem to be an embeddable online trailer yet, but here are the first two minutes. Sold!

The Skin I Live In Longtime art-house fave Pedro Almodóvar returns to Cannes without recent muse Penélope Cruz -- but with Antonio Banderas, star of several of his groundbreaking '80s flicks. Banderas plays a plastic surgeon with a bizarre Frankensteinian obsession in what's described as a 1940s-flavored horror melodrama. Despite numerous premieres here, Almodóvar has still never won the Palme d'Or, and yes, that's a hint and a hunch.

Restless Gus Van Sant's latest is an intriguing-looking outsider love story, starring Mia Wasikowska as a cancer patient and Henry Hopper (son of Dennis) as an alienated young man whose best friend is a WWII Japanese ghost. But is it a commercial Van Sant movie in the "Good Will Hunting"/"Finding Forrester" vein, or a Euro-friendly art-house oddity in the "Elephant"/"Paranoid Park" vein? Either way, it's the opener in Un Certain Regard, Cannes' slightly artier second-string competition, which is often where the most exciting films are found. And Van Sant is a contender for the Jerry Lewis-Woody Allen awards, which convey the undying loyalty of European culture-vultures upon American filmmakers who are all but forgotten at home. (Other recent nominees: Jim Jarmusch, James Gray, Abel Ferrara, Lodge Kerrigan.)

We Need to Talk About Kevin It's taken a long time for Scottish director Lynne Ramsay ("Morvern Callar") to bring Lionel Shriver's acclaimed novel about a troubled teen and the aftermath of a school shooting to the screen, but Ramsay has a rep as Britain's undiscovered secret and expectations are huge. Indie heroes Tilda Swinton and John C. Reilly -- an unlikely but irresistible pairing -- star as the estranged parents of the titular Kevin (Ezra Miller).

Hara-Kiri: The Death of a Samurai Coming hard on the heels of ultra-prolific Japanese genre maniac Takashi Miike's samurai opus "13 Assassins" comes his next samurai movie -- and it's the first 3-D film ever included in the Cannes competition! (To be clear: Other 3-D films have been shown at Cannes in non-competition slots, including the latest "Pirates of the Caribbean" entry this year.)

This Must Be the Place Hardly anyone in America saw Italian director Paolo Sorrentino's dazzling "Il Divo," an Oliver Stone-meets-Scorsese political phantasmagoria that was one of the genuine cinematic breakthroughs of recent years. Now Sorrentino turns to English-language film with this eagerly anticipated fable about an aging rock star (Sean Penn) who's hunting for a Nazi war criminal. We definitely haven't seen that movie before. Frances McDormand, Judd Hirsch and Harry Dean Stanton co-star.

Oslo, August 31st Norwegian director Joachim Trier's "Reprise" is one of the terrific undiscovered movies of the last decade, an exhilarating comic fable about art and life that splits the difference between Godard and, say, "High Fidelity" with tremendous cinematic craft, an irrepressible sense of humor and genuine heart. (Fun fact: Trier is indeed a cousin of Lars von Trier.) Trier's new film "Oslo, August 31st" -- that's when and where the main character intends to kill himself -- screens in the lower-wattage Certain Regard competition, and I will happily skip other things to catch it.

Once Upon a Time in Anatolia He has a subzero commercial profile in the United States, but Turkish director Nuri Bilge Ceylan ("Climates," "Three Monkeys") has developed a modest but intense international following for his brooding, Bergmanesque urban dramas. (Which are never officially even a little bit about such "Turkish" questions as the role of Islam or the ambiguous, intercontinental status of his country, by the way, but may indirectly wind up being about those things after all.) If this story about a doctor living on the rural steppes (I'm guessing it's meant to recall Chekhov's "Uncle Vanya") is the masterpiece Ceylan hasn't quite made yet -- well, OK, no, it won't change much of anything. But people in Cannes and in Turkey will sure be excited, and you'll be able to watch the movie on VOD in like six months.