The WikiLeaks Grand Jury and the still escalating War on Whistleblowing

By keeping everyone in the dark about what it does, the administration shields itself from the rule of law 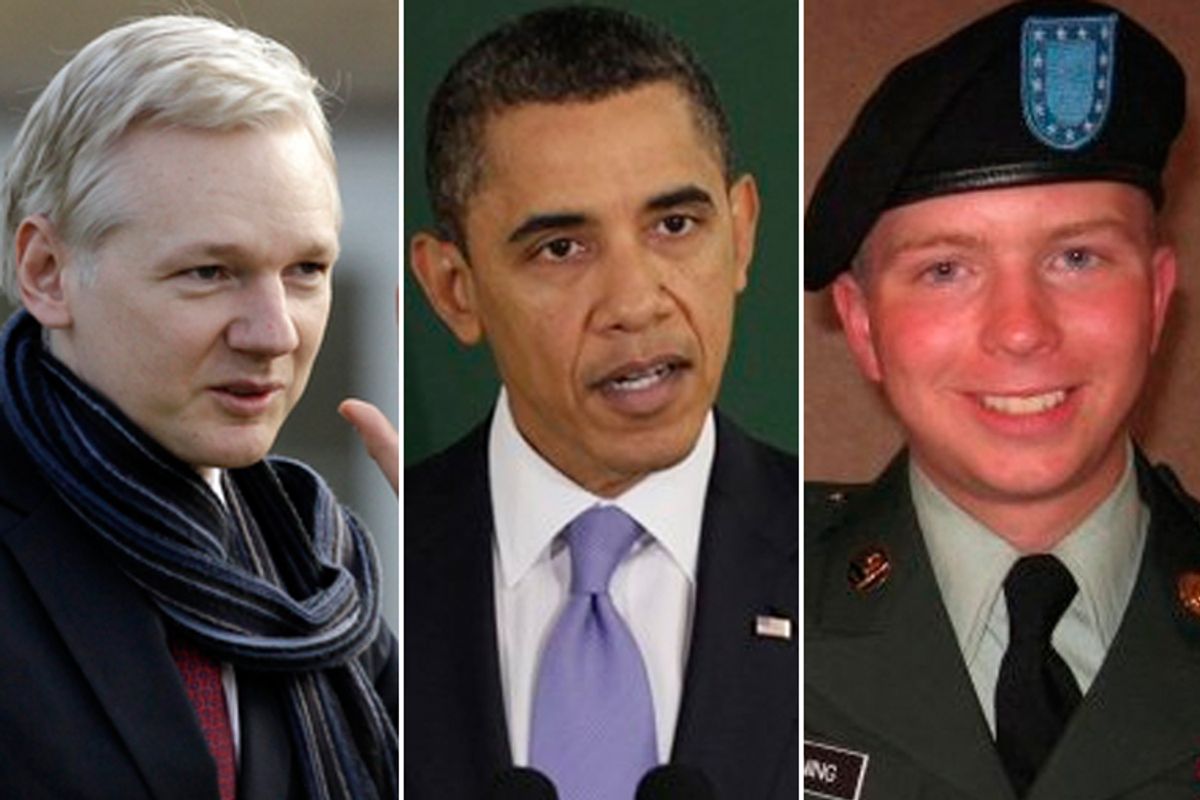 The contrast between these two headlines from this morning tells a significant story: From The Guardian (click image to enlarge):

As Julian Assange wins the Sydney Peace Prize for "exceptional courage in pursuit of human rights," NPR reports that "a federal grand jury in Virginia is scheduled to hear testimony on Wednesday from witnesses" in the criminal investigation of his whistle-blowing group, as "prosecutors are trying to build a case against [the] WikiLeaks founder [] whose website has embarrassed the U.S. government by disclosing sensitive diplomatic and military information."  The NPR story -- based in part on my reporting of a Grand Jury Subpoena served two weeks ago in Cambridge -- explains what has long been clear: that "the WikiLeaks case is part of a much broader campaign by the Obama administration to crack down on leakers."

Specifically, NPR accurately reports, the effort to turn Assange and WikiLeaks into criminals for doing nothing more than what newspapers, Bob Woodward, and administration officials frequently do -- disclose government secrets to the public without authorization -- is merely one prong in the Obama administration's unprecedented war against whistleblowing:

National security experts say they can't remember a time when the Justice Department has pursued so many criminal cases based on leaks of government secrets.

Steve Aftergood of the Federation of American Scientists has been following five separate prosecutions, part of what he calls a tremendous surge by the Obama administration.

For people who are concerned about freedom of the press, access to national security information, it's a worrisome development," says Aftergood, who writes for the blog Secrecy News [ed: and is a vocal WikiLeaks critic].

Aftergood says some of the most important disclosures of the past decade, including abuses by the U.S. military at the Abu Ghraib prison in Iraq, came out because people concerned about overreach blew the whistle on the government.

"Leaks serve a very valuable function as a kind of safety valve," he adds. "They help us to get out the information that otherwise would be stuck."

The vast majority of publicly disclosed high-level government corruption and lawbreaking over the last decade has come from unauthorized leaks, with the majority of it over the last year from WikiLeaks. Thus, it's hardly surprising that high-level government officials -- even those who ran on a platform of protecting and venerating whistle-blowing -- want to destroy it through a mix of persecution and intimidation.  To its credit, the DOJ recently announced that it would not prosecute Thomas Tamm, the mid-level DOJ officials who informed the New York Times about the Bush warrantless eavesdropping program.  But that has been a rare exception, as the DOJ is actively prosecuting an array of whistleblowers who exposed similar levels of corruption and wrongdoing -- in blatant violation of Obama's decree to "Look Forward, not Backward" when it comes to protecting powerful Bush-era political officials who committed serious crimes.  Indeed, the prosecution of WikiLeaks -- which, unlike government employees, has no duty to safeguard government secrets -- would be the greatest blow to press freedoms and whistleblowing in the last several decades at least.

Assange was awarded this peace prize yesterday because -- unlike other Peace Prize recipients -- his work has been relentlessly devoted to impeding wars (not escalating them) by exposing the truth about the destruction and suffering they spawn. Beyond that, even the most vehement WikiLeaks critics, such as NYT Executive Editor Bill Keller, admit that the disclosures from WikiLeaks (and allegedly Bradley Manning) played at least some role in sparking the democratic rebellions in the Middle East, as those documents highlighted in new detail the breadth of the corruption of many of those despots:

And that does not count the impact of these revelations on the people most touched by them. WikiLeaks cables in which American diplomats recount the extravagant corruption of Tunisia's rulers helped fuel a popular uprising that has overthrown the government.

And yet, many of the very same people who cheer for those democratic uprisings continue simultaneously to cheer for the administration that (a) steadfastly supported those dictators (and in some cases still supports them in exchange for doing America's bidding) while (b) persecuting with Grand Jury investigations, imprisonment, and crushing solitary confinement those who seem to have helped spawn those rebellions.  That the U.S. Government is obsessed with crushing one of the few remaining avenues for learning what it does (whistleblowing) -- and forever imprisoning those who have brought more transparency to its wrongdoing and deceit than all media outlets combined (WikiLeaks, Assange and, if the accusations are true, Manning) -- underscores just how central a role secrecy plays in maximizing government power and the ability of officials to abuse it.  This secrecy regime is the heart and soul of the National Security State.

But to really see the true purposes served by secrecy, just consider this truly amazing ACLU report from yesterday.  In 2009, the ACLU filed a FOIA request seeking information about how the Government has interpreted and applied the FISA Amendments Act of 2008 -- the bipartisan legislation which vested lawbreaking telecoms with retroactive immunity and drastically expanded the Government's domestic eavesdropping powers (in order to legalize the crux of the once-controversial Bush NSA program).  Unsurprisingly, the Most Transparent Administration Ever refused to provide anything other than the most heavily redacted documents in response to that FOIA request, though it was enough, explained the ACLU, to "confirm that the government had interpreted the statute as broadly as we had feared and even that the government had repeatedly violated the few limitations that the statute actually imposed."

But since then, the ACLU has been aggressively pursuing more documents, including attempting to find out which specific private industry telecoms are cooperating in these eavesdropping programs.   Two weeks ago, the DOJ provided its explanations as to why it refuses to produce that information.  Among those documents was what the ACLU calls " this unexpectedly honest explanation from the FBI" about the real reason it insists on concealing this information.  Just behold the noble purposes fulfilled by the secrecy regime (click on image to enlarge):

As the ACLU succinctly put it:

There you have it. The government doesn't want you to know whether your internet or phone company is cooperating with its dragnet surveillance program because you might get upset and file lawsuits asserting your constitutional rights. Would it be such a bad thing if a court were to consider the constitutionality of the most sweeping surveillance program ever enacted by Congress?

This is the real purpose of the Government's devotion to the secrecy regime:  it prevents any meaningful accountability on the part of those in power.  Preventing the public from knowing what they're doing (and what their "private partners" are doing) ensures no backlash ensues and there is no accountability possible.  That, manifestly, is the Obama administration's overarching goal in adopting the Bush/Cheney version of the "state secrets" privilege and thus shielding even presidential crimes from judicial review: by keeping everyone, including courts, in the dark about what they do, they shield themselves (the public/private consortium that runs the National Security and Surveillance States) from the rule of law.  And by keeping the public in the dark about what they do, they maintain exclusive control over information and thus shield and enable their own propaganda.

Whistleblowers in general -- and WikiLeaks and Assange in particular -- are one of the very, very few genuine threats to that scheme.  And that -- and that alone -- is why they are being targeted with such fervor and force.  And it's why those who believe in greater transparency and in subverting that secrecy regime should do everything possible to defend whistleblowers from this assault.

Philosophy Professor Jonathan Lear has a very interesting article in The New Republic on what motivated P.J. Crowley to speak out against Bradley Manning's detention conditions and the important public values fulfilled by that type of (exceedingly rare) candor from public officials.

And for those in Boston: on May 26, I'll be speaking to the annual meeting of the ACLU in Massachusetts.  Ticket information is here.  In advance of that event, I was interviewed by them on multiple civil liberties issues; those short video segments can be viewed here.