Bin Laden's death prompts hopes of wars ending and civil liberties returning. Here's why you shouldn't bet on it 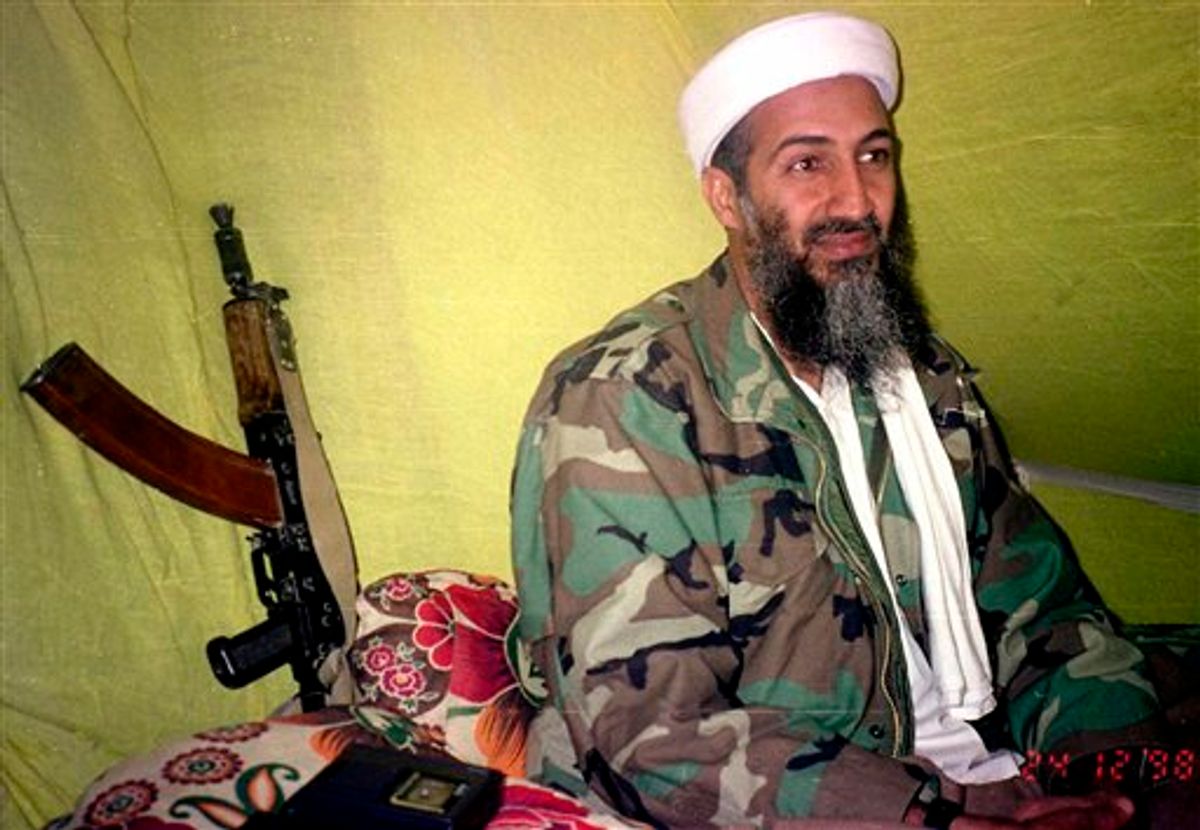 FILE - In this Dec. 24, 1998 file photo, Muslim militant and al-Qaida leader Osama Bin Laden speaks to a selected group of reporters in mountains of Helmand province in southern Afghanistan. The Americans who raided bin Laden's lair met far less resistance than the Obama administration described in the aftermath, according to its latest account. The commandos encountered gunshots from only one man, whom they quickly killed, before sweeping the house and shooting others, who were unarmed, a senior defense official said. (AP Photo/Rahimullah Yousafzai, File) (AP)
--

Numerous people have argued that one potential benefit from the death of Osama bin Laden is that it will enable the U.S. Government to diminish its war commitments in that part of the world and finally arrest the steady erosion of civil liberties perpetrated in the name of the War on Terror (as though any of that is the government's goal).  By contrast, I've argued from the start that the bin Laden killing is likely to change nothing of any significance, except that -- if anything -- the resulting nationalistic pride, the vicarious sensations of power and strength, the substantial political benefits for the President, and the renewed faith in military force would be more likely to intensify rather than arrest these trends.  But that was definitely a minority opinion.

As but one example, this person (cheered on by Democratic Party commentators) -- aside from falsely attributing to me numerous statements I never made, and thereafter refusing to post my response in the comment section -- chided me for failing to realize that "Bin Laden's death also makes things like closing the gulag at Guantanamo Bay seem likelier and more possible" and that it also "marks what could be the beginning of the end of many of the evils that Glenn Greenwald has consistently written about over the past decade, the opportunity to reassert the principles he determinedly wants to defend." Andrew Sullivan argued that, in the wake of the bin Laden killing, "Obama will have the leverage to shift strategy drastically [in Afghanistan] in the coming year" and that the "average American" will conclude that "it is time to leave. With our heads high. And justice done."  Numerous commenters and others have similarly insisted that bin Laden's death will spawn reversals in America's War on Terror policies over the last decade.

It's still far too early to know with any certainty what the outcome will be.  There's an inertia to our policies that is not going to vanish overnight.  Still, it's worth considering the numerous events that have occurred since bin Laden's killing, as I think it gives at least some sense of the direction in which we'll head:

The House Armed Services Committee is expected to take up a defense authorization bill on Wednesday that includes a new authorization for the government to use military force in the war on terrorism. . . .

The provision states that Congress "affirms" that "the United States is engaged in an armed conflict with Al Qaeda, the Taliban, and associated forces," and that the president is authorized to use military force -- including detention without trial -- of members and substantial supporters of those forces.

That language, which would codify into federal law a definition of the enemy that the Obama administration has adopted in defending against lawsuits filed by Guantánamo Bay detainees, would supplant the existing military force authorization that Congress passed overwhelmingly on Sept. 14, 2001. It instead named the enemy as the perpetrators of the Sept. 11 attacks.

Critics of [the] provision have reacted with alarm to what they see as an effort to entrench in a federal statute unambiguous authority for the executive branch to wage war against terrorists who are deemed associates of Al Qaeda but who lack a clear tie to the Sept. 11 attacks.

In a joint letter to Congress, about two dozen groups -- including the American Civil Liberties Union and the Center for Constitutional Rights -- contended that the proposal amounted to an open-ended grant of authority to the executive branch, legitimizing an unending war from Yemen to Somalia and beyond.

"This monumental legislation -- with a large-scale and practically irrevocable delegation of war power from Congress to the president -- could commit the United States to a worldwide war without clear enemies, without any geographical boundaries" and "without any boundary relating to time or specific objective to be achieved," the letter warned.

The article noted:  "At least one civilian died when the missiles damaged the restaurant and a nearby home."

The article noted:  "A neighbor, who goes by the name of Ayatullah, says the girl was 12 years old."

Inside the Pentagon, however, officials make the case that rather than using Bin Laden’s death as a justification for withdrawal, the United States should continue the current strategy in Afghanistan to secure additional gains and to further pressure the Taliban to come to the bargaining table for negotiations on political reconciliation.

We haven't been doing all of these things -- or any of them -- because of Osama bin Laden.  We've been doing this because it generates massive benefits for the country's most powerful political and economic factions, and that hasn't changed.  Bin Laden was but one of the pretexts to justify it all.  And with him gone (but definitely not forgotten), multiple other pretexts will quickly be created to take his place.  Do the events since his killing leave any real doubt about that?  As but one example, Marc Ambinder -- in a hagiographic love letter to the secretive, glorious Joint Special Operations Command that oversaw the bin Laden killing -- reveals as though it's the most natural thing in the world:

JSOC has fought a silent but successful proxy war against Iran’s Revolutionary Guards -- even, National Journal has learned, engaging directly with its soldiers in at least three countries. It has broken up nuclear-proliferation rings. JSOC has developed contingency plans to safeguard Pakistan’s nuclear weapons in the event of a coup in that nation. Its intelligence unit helps Colombian commandos dismantle lucrative drug rings that finance Hezbollah operations around the world. It has provided intelligence that has helped to break up domestic terrorism rings. Operating in tandem with other special forces and regular military battalions, JSOC eviscerated al-Qaida’s network in Iraq. It is nothing less than a secret army within the U.S. military.

We're fighting a secret, undeclared, undiscussed hot war against Iran in multiple nations (of limited scope, at least for now), as well as numerous other hidden conflicts, using "a secret army within the U.S. military."  Does anyone believe any of this undemocratic, massive imperial machinery -- and the liberty abridgments that inevitably accompany it -- will be dismantled or even meaningfully reduced because Osama bin Laden is dead?

It is true that a few members of Congress are now advocating an Afghanistan withdrawal (though many were already war skeptics), and there is mixed polling on the war there (though the last thing that determines the end of an American war is public opinion). It would be superb -- a serious cause for celebration -- if the bin Laden killing, now that it's a fait accompli, did produce these benefits, and it's certainly worth exploiting that event to try to bring it about.  And we may in fact be tired of our imperial adventure in Afghanistan and ready to re-direct resources to other countries.  But America's National Security State and its posture of Endless War was and remains motivated by far more than one man, or even Al Qaeda generally.  There's no will on the part of the political class to reverse it -- quite the opposite -- and there won't be until the citizenry demands it.

UPDATE:  According to Tuesday's Wall Street Journal, the current military plans for "withdrawal" from Afghanistan calls for a whole 5,000 troops to be pulled out in July, followed by "as many as" another 5,000 be the end of the year (h/t David Mizner).  Those plans were prepared prior to bin Laden's killing, so it remains to be seen whether it changes substantially.

For those interested, the above-referenced blogger at Slacktivist, Fred Clark, has posted a further response, including explaining that long comments are often eaten by his system, an explanation I'll accept.