The quaint and obsolete Nuremberg principles

Why do we continue to shield George W. Bush from accountability for the civilian deaths that he caused? 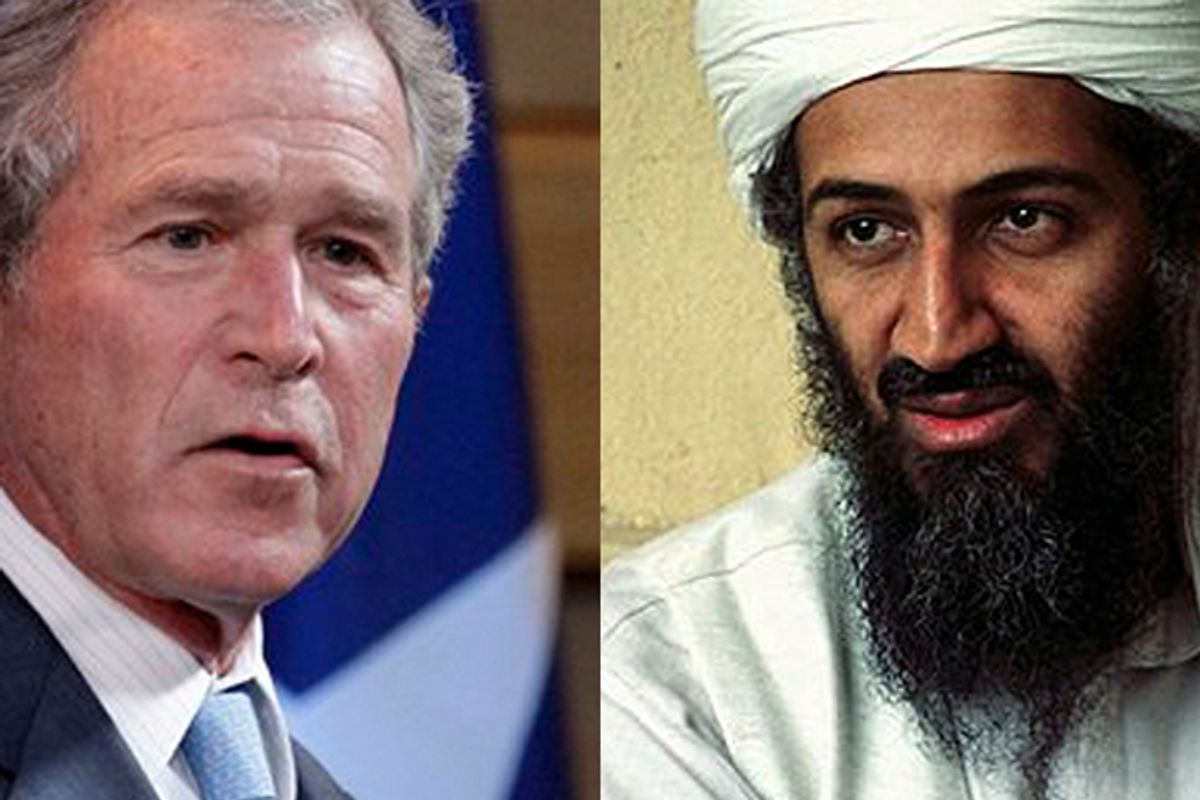 Benjamin Ferencz is a 92-year-old naturalized U.S. citizen, American combat soldier during World War II, and a prosecutor at the Nuremberg Trials, where he prosecuted numerous Nazi war criminals, including some responsible for the deaths of upward of 100,000 innocent people.  He gave a fascinating (and shockingly articulate) 13-minute interview yesterday to the CBC in Canada about the bin Laden killing, the Nuremberg principles, and the U.S. role in the world.  Without endorsing everything he said, I hope as many people as possible will listen to it.

All of Ferencz's answers are thought-provoking -- including his discussion of how the Nuremberg Principles apply to bin Laden -- but there's one answer he gave which I particularly want to highlight; it was in response to this question: "so what should we have learned from Nuremberg that we still haven't learned"?  His answer:

I'm afraid most of the lessons of Nuremberg have passed, unfortunately.  The world has accepted them, but the U.S. seems reluctant to do so.  The principal lesson we learned from Nuremberg is that a war of aggression -- that means, a war in violation of international law, in violation of the UN charter, and not in self-defense -- is the supreme international crime, because all the other crimes happen in war.  And every leader who is responsible for planning and perpetrating that crime should be held to account in a court of law, and the law applies equally to everyone.

These lessons were hailed throughout the world -- I hailed them, I was involved in them -- and it saddens me to no end when Americans are asked:  why don't you support the Nuremberg principles on aggression?  And the response is:  Nuremberg?  That was then, this is now.  Forget it.

To be candid, I've been tempted several times to simply stop writing about the bin Laden killing, because passions are so intense and viewpoints so entrenched, more so than any other issue I've written about.  There's a strong desire to believe that the U.S. -- for the first time in a long time -- did something unquestionably noble and just, and anything which even calls that narrative into question provokes little more than hostility and resentment.  Nonetheless, the bin Laden killing is going to shape how many people view many issues for quite some time, and there are still some issues very worth examining.

One bothersome aspect about the reaction to this event is the notion that bin Laden is some sort of singular evil, someone so beyond the pale of what is acceptable that no decent person would question what happened here:  he killed civilians on American soil and the normal debates just don't apply to him.  Thus, anyone who even questions whether this was the right thing to do, as President Obama put it, "needs to have their head examined" (presumably that includes Benjamin Ferencz).  In other words, so uniquely evil is bin Laden that unquestioningly affirming the rightness of this action is not just a matter of politics and morality but mental health.  Thus, despite the lingering questions about what happened, it's time, announced John Kerry, to "shut up and move on."  I know Kerry is speaking for a lot of people:  let's all agree this was Good and stop examining it.  Tempting as that might be -- and it is absolutely far easier to adhere to that demand than defy it -- there is real harm from leaving some of these questions unexamined.

No decent human being contests that the 9/11 attack was a grave crime.  But there are many grave crimes, including ones sanctioned by (or acquiesced to) those leading the chorus of cheers for bin Laden's killing.  To much controversy, Noam Chomsky recently wrote: "uncontroversially, Bush's crimes vastly exceed bin Laden's."  That claim prompted widespread objections, including from Andrew Sullivan, who specifically criticized Chomsky's use of the word "uncontroversially" in making that claim.  That semantic objection is not invalid: of course that comparative judgment is controversial, especially in the U.S.

Nor do I think such comparisons are ultimately worthwhile:  how does one weigh the intentional targeting of civilians that kills several thousand against an illegal, aggressive war that recklessly and foreseeably causes the deaths of at least 100,000 innocent people, and almost certainly far more?  Comparisons aside: what is clear is that Bush's crimes are grave, of historic proportion, and it's simply impossible for anyone who believes in the Nuremberg Principles to deny that.

His invasion of Iraq caused the deaths of at least 100,000 (and almost certainly more) innocent Iraqis: vastly more than bin Laden could have dreamed of causing. It left millions of people internally and externally displaced for years.  It destroyed a nation of 26 million people.  It was without question an illegal war of aggression: what the lead prosecutor of the Nuremberg Trials -- as Ferencz just reminded us --  called the "the central crime in this pattern of crimes, the kingpin which holds them all together."  And that's to say nothing of the worldwide regime of torture, disappearances, and black sites created by the U.S during the Bush years.

Yet the very same country -- and often the very same people -- collectively insisting upon the imperative of punishing civilian deaths (in the bin Laden case) has banded together to shield George Bush from any accountability of any kind.  Both political parties -- and the current President -- have invented entirely new Orwellian slogans of pure lawlessness to justify this protection (Look Forward, Not Backward):  one that selectively operates to protect only high-level U.S. war criminals but not those who expose their crimes.  Worse, many of Bush's most egregious crimes -- including the false pretenses that led to this unfathomably lethal aggressive war and the widespread abuse of prisoners that accompanied it -- were well known to the country when it re-elected him in 2004.

Those who advocated for those massive crimes -- and even those who are directly responsible for them -- continue to enjoy perfectly good standing in mainstream American political circles.  The aptly named "Shock and Awe" was designed to terrify an entire civilian population into submission through the use of massive and indiscriminate displays of air bombings.  John Podhoretz criticized the brutal assault on Fallujah for failing to exterminate all "Sunni men between the ages of 15 and 35."  The country's still-most celebrated "foreign affairs expert" at The New York Times justified that attack based on the psycopathic desire to make Iraqis "Suck. On. This."  The Washington Post hires overt torture advocates as Op-Ed writers and regularly features Op-Ed contributions from the architects of the Iraq crime, as they did just today (Donald Rumsfeld claiming "vindication").   And, of course, we continue to produce widespread civilian deaths in multiple countries around the world with virtually no domestic objection.

There's no question that the perpetrators of the 9/11 attack committed grave crimes and deserved punishment.  But the same is true for the perpetrators of other grave crimes that result in massive civilian death, including when those perpetrators are American political officials.  As Ferencz put it when describing one of the core lessons of Nuremberg:  "every leader who is responsible for planning and perpetrating that crime should be held to account in a court of law, and the law applies equally to everyone."  More than anything, that precept -- the universality of these punishments -- was the central lesson of Nuremberg, as Jackson explained in his Opening Statement:

What makes this inquest significant is that these prisoners represent sinister influences that will lurk in the world long after their bodies have returned to dust. . . . . And let me make clear that while this law is first applied against German aggressors, the law includes, and if it is to serve a useful purpose it must condemn aggression by any other nations, including those which sit here now in judgment.

But as Ferencz put it:  "Nuremberg? That was then, this is now."  Or, to put it another way, Nuremberg is so pre-9/11 (and even before 9/11, we often violated Jackson's insistence that those principles must apply to ourselves as much as they did to Nazi war criminals).

There is, of course, a difference between deliberately targeting civilians and recklessly causing their deaths.  But, as American law recognizes in multiple contexts, acts that are undertaken recklessly -- without regard to the harm they cause -- are deemed intentional.  And when it comes to an aggressive and illegal war that counts the deaths of extinguished civilian lives in the hundreds of thousands -- such as the destruction of Iraq -- those distinctions fade into insignificance.

The perpetrators of the 9/11 attacks deserve to be held accountable for those crimes.  But it's been a bit difficult listening to a country that continuously commits its own egregious crimes -- ones that constantly cause civilian deaths -- righteously celebrating the bin Laden killing as though it is applying universal principles of justice grounded in unmitigated contempt for lawless aggression.  It's hard to avoid the conclusion that what has provoked such rage at bin Laden as a supreme criminal isn't the unlawful killing of civilians, but rather the killing of Americans on U.S. soil.  The way we treat our own war criminals and policies of mass civilian death from around the world -- and the way we so brazenly repudiate and even scorn the Nuremberg Principles we said we were establishing for the world -- leave little doubt about that.

How can a country which has so passively accepted the complete immunity for George Bush, Dick Cheney and others -- and which long tolerated if not actively supported their murderous policies -- convincingly pose as stalwart opponents of lawlessly caused civilian deaths?  Does anyone doubt the widespread American fury that would have resulted if Iraqis had come to the U.S. and killed Bush or other U.S. political leaders during that war?  Recall the intense condemnation of an Iraqi citizen who did not shoot Bush in the head and dump his corpse into the ocean, but rather simply threw a shoe at him to protest the extraordinary amounts of Iraqi blood he has on his hands.  Any efforts to harm an American political leader for the civilian deaths they cause would be decried by American consensus as "Terrorism" or worse (and that would be the case despite the fact that we not only tried to kill Saddam but are now quite clearly attempting to kill Gadaffi).  "American exceptionalism" in its most odious expression means that we have the right to do things that nobody else in the world has the right to do, and that, as much as anything, is what is driving the reaction here.

It's always easier -- and more satisfying -- to condemn the crimes of others rather than one's own.  There's always a temptation to find excuses, mitigations and even justifications for one's own crimes while insisting that the acts of others -- especially one's enemies -- are expressions of pure evil.  But a country that regrets the Iraq War only because it was not prosecuted as competently as it should have been -- and which as elite consensus scorns as radical and irresponsible the notion of accountability for its own war criminals -- is hardly in a position to persuasively posture as righteous avengers of civilian deaths.  The claims being made about why the killing of bin Laden is grounded in such noble principles would be much more compelling if those same principles were applied to ourselves as well as our enemies.  And the imperative to do so, more than anything, was the prime mandate of Nuremberg.