A leaner, meaner "Pirates of the Caribbean" reboot 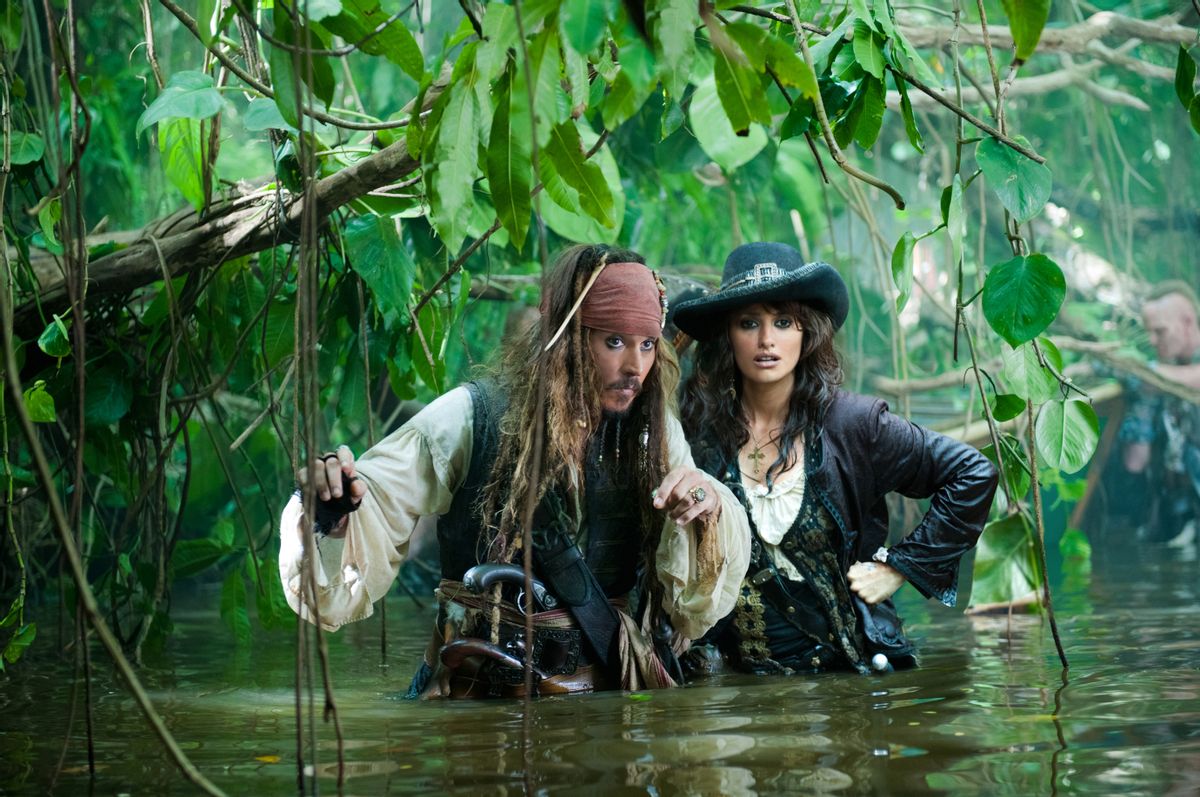 "PIRATES OF THE CARIBBEAN: ON STRANGER TIDES" Captain Jack (JOHNNY DEPP) and Angelica (PENELOPE CRUZ) make their watery way through the jungle in search of the Fountain of Youth. Ph: Peter Mountain Â©Disney Enterprises, Inc. All Rights Reserved. (Peter Mountain)
--

CANNES, France -- So, yeah: I flew thousands of miles across an ocean to crash in an apartment full of Polish people in a party-hearty beachfront town where the neighbors segued sweetly from Björk remixes to "Sweet Home Alabama" at 2 o'clock in the morning, just so I could get up really early with more than 1,000 other masochists and go see a moderately entertaining action-adventure fantasy that will be playing at every shopping mall in the United States come Friday. I guess you won't be getting the French subtitles below Johnny Depp's face, and that was so worth it. "On s'empare du navire!" (Loose translation: We kicked your asses!) But you may have noticed that amid that tangled sentence I applied the words "moderately entertaining" to Rob Marshall's "Pirates of the Caribbean: On Stranger Tides," which had its world premiere on Saturday amid a sardine-crush mad scene at the Cannes Film Festival. (I saw a woman pulled out of the crowd of photographers and hauled away in an ambulance.) That's already a big win for a Disney franchise that had slipped from baroque CGI decadence deep into the Rococo period under previous director and all-around mad scientist Gore Verbinski.

"On Stranger Tides" is something short of a full series reboot, but Marshall -- best known for big-budget musicals like "Chicago" and "Nine" -- has shed most of the supporting cast and almost all of the super-duper creature effects of the Verbinski trilogy, and that's mostly a good thing. (The French subtitle is "The Fountain of Youth," by the way, which is clearer and better, but I guess the writers are crediting Tim Powers' novel for inspiration.) Keira Knightley, Orlando Bloom, Bill Nighy, Stellan Skarsgård and others have departed for Davy Jones' locker (well, Nighy was already there) or other exotic ports of call. Screenwriters Ted Elliott and Terry Rossio focus tightly on Depp's dapper, roguish Capt. Jack Sparrow and his alternately ferocious and respectful rivalry with the scabrous Hector Barbossa (Geoffrey Rush), now a pirate-gone-straight commanding a Royal Navy warship in pursuit of Ponce de León's rumored Fountain of Youth. Arguably there's not much to see in Depp's performance this time around. We've seen an awful lot of the fey Keith Richards shtick, and he dials it down a little, intermittently allowing himself to be the decent, likable hero.

Even more important, Marshall delivers old-fashioned swashbuckling action-movie thrills more than computer-engineered grotesquerie. He kicks off the film, for instance, with a fast-moving, cleverly constructed (but not confusing!) chase scene through the streets of London -- via chandelier and rope and Judi Dench cameo and horse-and-carriage and exploding coal wagon -- that might be the best such sequence in the whole series. We certainly get a couple of new characters during the trans-Atlantic race for the mythical Fountain, which of course begins to resemble a video-game quest (you need two silver chalices, a mermaid's tear and the blood of Donkey Kong) and the results there are "comme ci, comme ça," as they say over here. I don't know what it is about Penélope Cruz acting in English; she speaks the language well enough and she's still plenty attractive, but something's missing, whether it's confidence or psychological fire or fundamental Espanish-ness. Anyway we're supposed to accept her as Angelica, a convent girl Jack seduced and abandoned years ago who also turns out to maybe, possibly, be the long-lost daughter of the infamous pirate Blackbeard (Ian McShane).

Yes, I said that Ian McShane, whose character on "Deadwood" may go down as the most profane in the medium's history, plays "the pirate all other pirates fear," as Jack puts it, captain of the dreadful black ship called Queen Anne's Revenge, with its skeleton figurehead and its zombiefied crew. (They aren't zombies, in the usual movie sense; Elliott and Rossio use the term in its anthropological-historical meaning, which may be a first for this franchise.) Handsome but decayed, evil down to the roots of his soul and a few meters below that, McShane's Blackbeard is the best special effect in "On Stranger Tides," which also features a bunch of sexy-scary mermaids with long glistening fishtails and a final MacGuffin-destination at the fabled Fountain of Youth itself, which resembles a Roman ruin from an 18th-century English landscape painting.

Indeed, if there's a problem with the fact that this movie is marginally more realistic than the preceding three, it's because it made me think a little bit, and that's never a good idea in a movie that's based (OK, at several removes) on a Disneyland ride. So we're somewhere around the year 1720, and Jack, Blackbeard, Barbossa and the Spanish fleet are all chasing the Fountain of Youth discovered two centuries earlier by the conquistador Juan Ponce de León, right? Great. (Let us note that later chroniclers claimed that Ponce de León was actually seeking a cure for impotence; he was 500 years too early for Viagra and in need of the Fountain of Whoomph, if you know what I mean and I think you do.) But the place the dude actually explored was Florida. Is that where we're supposed to be when all these characters go trekking through the jungle and climbing over mountains and plunging into canyons? The primeval mountains and canyons and jungles of Florida? Is that closer to Boca or to West Palm?

OK, I'm getting distracted, and if I go on any longer in this vein I'll start asking whether the Fountain of Youth in this movie, with its Roman Empire bathhouse look, supports some kind of crackpot, hyper-diffusionist archaeological theory. The main point, I guess, is that while a lot of people are predicting a disappointing summer for Hollywood (and I generally concur), "Pirates of the Caribbean: On Stranger Tides" injects new vigor into a megabucks franchise and makes for a perfectly acceptable night out. Now, the movie's too long and you can only watch so much swordfighting and the repartee's really not that great and if you see it that's two and a half hours of your life you'll never get back, just because you wanted to see Ian McShane and some cute mermaids. I report, you decide.