Cannes: A heart-rending take on a movie classic

The Dardenne brothers' mesmerizing "Kid With a Bike" finds inspiration in "Bicycle Thief," but it's wholly original 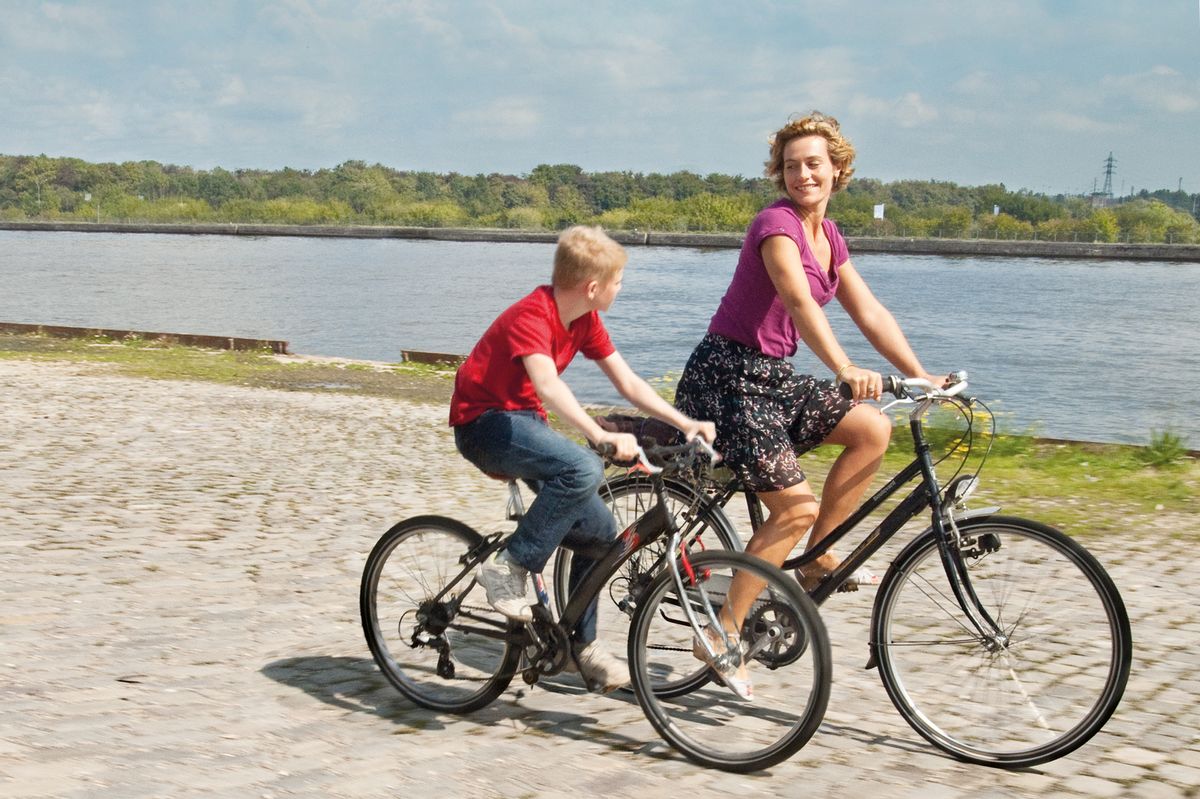 CANNES, France -- Before I get to the spinach-flavored subject of the Belgian filmmaking brothers Jean-Pierre and Luc Dardenne -- who have won the Palme d'Or here twice, for "Rosetta" in 1999 and "The Child" in 2005 -- let's start with their new movie, "The Kid With a Bike." An edge-of-your-seat emotional roller-coaster ride about ordinary people in a nondescript neighborhood, it's sometimes terrifying, often heart-rending and completely worth it. Anybody who's ever taken a film history class will note that there's already a movie about a kid and a bike, and the Dardennes know that too. If the boy in Vittorio De Sica's neorealist classic "The Bicycle Thief" has a dad but must search for his lost bike, the boy in this film has a bike and must search for his dad. Definitely sunnier and arguably more accessible than their earlier films, "The Kid With a Bike" might finally bring the Dardennes a somewhat larger American audience (but I've said that before and been wrong).

Here's the problem: If you've never seen a Dardenne film, it's not that likely I can describe them in terms that'll make you want to -- but once you see one, you'll get it. The brothers shoot lean, inexpensive movies about unglamorous characters in moments of crisis, mostly in and around their home city of Liège. Their subject matter is often wrenching, their mode is naturalistic and they seem devoted to probing the dark underbelly of human behavior as well as the weak spots in Europe's decaying social democracy. Sounds sexy, right?

Thing is, none of that conveys how tightly edited and exciting the Dardennes' movies can be. Not a second is wasted, and every scene has a purpose. Their characters are constantly in motion, both physically and emotionally: In "The Kid With a Bike," 11-year-old Cyril (Thomas Doret) is somewhere between a human turbine and a wild animal, with so much energy and desire in his preadolescent frame he can't possibly contain it. Cinematographer Alain Marcoen's camera flows alongside the characters, but never in a way that focuses your attention on technique. The Dardennes borrow plot twists and narrative beats from the world of thrillers, but invest them with a tragic potential we rarely see in actual thrillers. We're constantly aware that the destiny of actual human beings rests on some idiotic criminal scheme hatched in a downscale Belgian neighborhood.

Expectations ran ultra-high over "Kid With a Bike," especially among Francophone viewers; the Dardennes have never brought a film to Cannes without winning something. I suspect this one won't garner their third Palme d'Or, and it may take critics some time to appreciate how subtle, and how terrific, it is. As the story begins, Cyril's got neither a dad nor a bike. He's a nearly uncontrollable kid in a group home, ferociously dedicated to escaping and seemingly immune to the mounting evidence that his father has purposefully disappeared and wants nothing to do with him. During one of his escape attempts, he tries to hide in a doctor's office and winds up clinging to a woman named Samantha, played by the wonderful Cécile de France, a French star who is actually Belgian by birth. "Not so tight," she tells him, as the counselors gradually pry him loose. "You can hold onto me, but not so tight." That becomes the motto for their improbable relationship.

The Dardennes are great believers in the present tense, which can be difficult for viewers used to psychological exposition. We never learn anything about Cyril's missing mother, and when Cyril and Samantha finally catch up with Guy (Dardenne regular Jérémie Renier), Cyril's dad, he has almost nothing to say for himself. Yeah, he moved. Yeah, he sold the bike. (Samantha finds the buyer, and buys it back.) He was "in the shit," financially speaking, and he tells Samantha that seeing Cyril just stresses him out. As deadbeat dads in movies go, Guy's pretty much the prince of the tribe. He doesn't even have a junk habit (like Renier's character in the Dardennes' "Lorna's Silence") or gambling debts to gangsters or whatever; he's just a total loser.

For that matter, what has made Samantha, a childless 30ish hairdresser, take such an interest in a thoroughly un-housebroken kid who nearly choked her on their first encounter? I guess the point of "The Kid With a Bike" is that questions like that matter a lot less than the question of what Samantha and Cyril do right now. And the movie's second half sees Samantha locked in an increasingly dangerous competition for Cyril against a neighborhood gang leader named Wes (Egon Di Mateo), one of the Dardennes' patented low-rent thugs. A charismatic, semi-tough teenager who has a car, a PlayStation and a mini-fridge full of beer and soda, Wes moves right in on this fatherless kid's obvious weak spot, seducing him into a criminal scheme that's both vicious and stupid, a bad idea doomed to go wrong.

I shouldn't say much more about a film that won't reach the United States for months or years, except that this time around the Dardennes are more focused on the redemptive possibilities of their Dostoevskian universe than on its bleak pits of despair. Cyril makes bad decisions and falls in love with the wrong substitute parent, but he's the toughest kid you'd ever want to meet, better than most grownups at admitting his mistakes and adjusting to reality. The Dardennes have described "The Kid With a Bike" as a fairy tale, and if Cyril has what remains of his innocence stripped away from him during the course of this story, he still has his fairy godmother watching over him.