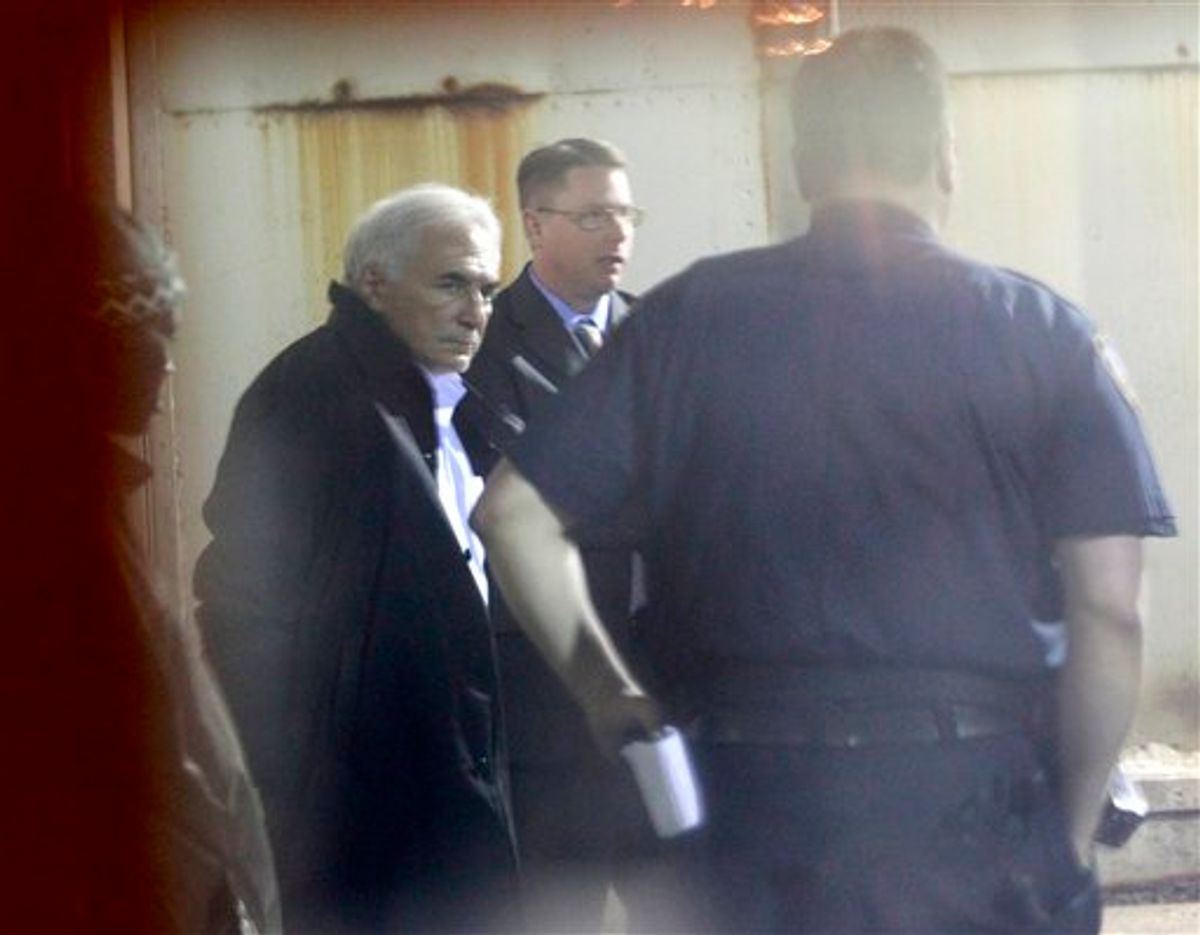 International Monetary Fund leader Dominique Strauss-Kahn, left, is seen through a window as he is checked into Municipal Court, Monday, May 16, 2011 in New York. Strauss-Kahn is accused of sexually assaulting a maid in his hotel room in New York City. (AP Photo/Julio Cortez) (AP)
--

The lawyer for a woman who says she was sexually assaulted by Dominique Strauss-Kahn nine years ago says she wants to file a legal complaint against the International Monetary Fund chief.

Lawyer David Koubbi says Tristane Banon did not file suit earlier due to "pressures" she face over the alleged 2002 sexual assault by Strauss-Kahn and was dissuaded by her own mother, a regional Socialist official.

The IMF chief -- a possible Socialist contender in France's 2012 presidential race -- is in custody in New York after being accused of a weekend sexual assault against a hotel maid.

NEW YORK (AP) -- The head of the International Monetary Fund was examined for evidence that could incriminate him in the alleged sexual assault of a hotel maid, charges that stunned the global financial world and upended French presidential politics.

Dominique Strauss-Kahn, a married father of four whose reputation with women earned him the nickname "the great seducer," faced arraignment Monday on charges of attempted rape and criminal sexual contact in the alleged attack on a maid who went into his penthouse suite at a hotel near Times Square to clean it.

Strauss-Kahn was taken into custody on Saturday and spent more than 24 hours inside a Harlem precinct, where police say the maid identified him from a lineup, then headed to a hospital for a "forensic examination" requested by prosecutors to obtain more evidence in the case, defense lawyer William Taylor said. He was taken to a Manhattan court early Monday.

Another defense attorney, Benjamin Brafman, said the IMF managing director "intends to vigorously defends these charges and he denies any wrongdoing."

A member of France's Socialist party, Strauss-Kahn was widely considered the strongest potential challenger next year to President Nicolas Sarkozy, whose political fortunes have been flagging.

Environment Minister Nathalie Kosciusko-Morizet lamented the shadow the incident could cast on all of France.

"I'm very surprised to see at what speed in France we rush to political conclusions about a subject that is a serious one. He is accused of very serious acts. We are hardly speaking at all of the alleged victim," she said Monday on Canal-Plus television. In addition to the hotel maid, Koscuisko-Morizet said there is another "clear victim, which is France."

Strauss-Kahn, 62, was nabbed less than four hours after the alleged assault, plucked from first class on a Paris-bound Air France flight that was just about to leave the gate at John F. Kennedy International Airport.

He was alone when he checked into the luxury Sofitel hotel, not far from Times Square, on Friday afternoon, police said. It wasn't clear why he was in New York. The IMF is based in Washington, and he had been due in Germany on Sunday to meet with Chancellor Angela Merkel.

The 32-year-old maid told authorities that when she entered his spacious, $3,000-a-night suite early Saturday afternoon, she thought it was unoccupied. Instead, Strauss-Kahn emerged from the bathroom naked, chased her down a hallway and pulled her into a bedroom, where he sexually assaulted her, New York Police Department spokesman Paul J. Browne said.

The woman told police she fought him off, but then he dragged her into the bathroom, where he forced her to perform oral sex on him and tried to remove her underwear. The woman was able to break free again, escaped the room and told hotel staff what had happened, authorities said.

Strauss-Kahn was gone by the time detectives arrived moments later. He left his cellphone behind. "It looked like he got out of there in a hurry," Browne said.

The NYPD discovered he was at JFK and contacted officials at the Port Authority of New York and New Jersey, which runs the airport. Port Authority police officers arrested him.

The maid was taken by police to a hospital and was treated for minor injuries. Stacy Royal, a spokeswoman for Sofitel, said the hotel's staff was cooperating in the investigation and that the maid "has been a satisfactory employee of the hotel for the past three years."

Strauss-Kahn was arrested on charges of a criminal sex act, attempted rape and unlawful imprisonment. Authorities were looking for any forensic evidence and DNA.

His wife, Anne Sinclair, defended him in a statement to French news agency AFP.

"I do not believe for one second the accusations brought against my husband. I have no doubt his innocence will be established," said Sinclair, a New York-born journalist who hosted a popular weekly TV news broadcast in France in the 1980s and '90s.

The arrest could throw the long-divided Socialists back into disarray about who they could present as Sarkozy's opponent. Even some of his adversaries were stunned.

"It's totally hallucinating. If it is true, this would be a historic moment, but in the negative sense, for French political life," said Dominique Paille, a political rival to Strauss-Kahn on the center right, on BFM television. Still, he urged, "I hope that everyone respects the presumption of innocence. I cannot manage to believe this affair."

Candidates need to announce their intentions this summer to run in fall primary elections.

"If he's cleared, he could return -- but if he is let off only after four or five months, he won't be able to run" because the campaign will be too far along, said Jerome Fourquet of the IFOP polling agency.

"I think his political career is over," Philippe Martinat, who wrote a book called "DSK-Sarkozy: The Duel," told The Associated Press. "Behind him he has other affairs ... I don't see very well how he can pick himself back up."

Strauss-Kahn is known as DSK in France, but media there also have dubbed him "the great seducer." His reputation as a charmer of women has not hurt his career in France, where politicians' private lives traditionally come under less scrutiny than in the United States.

In 2008, Strauss-Kahn was briefly investigated over whether he had an improper relationship with a subordinate female employee. The IMF board found his actions "reflected a serious error of judgment" yet deemed the relationship consensual.

But attempted rape charges are far more serious than extramarital flings and could do far more damage to his reputation in France and abroad.

"It's sure that a future president already mired in judicial problems is not well seen by the French," said Patricia Bous, a lab researcher in Paris' Left Bank on Monday.

"It's obvious that this is someone a lot of people were counting on, and because of this all of the cards are being reshuffled. So I don't know what's going to happen, but for me there is a presumption of innocence and we await the proof so we'll see," said university employee Hubert Javaux, also in the Left Bank.

French newspapers all put Strauss-Kahn on their front pages Monday morning, with grim headlines and photos. "DSK Out" read the banner headline on the left-leaning Liberation. "The Doors of the Elysee Are Closing for DSK" read that in Le Soir.

The New York allegations come amid French media reports about Strauss-Kahn's lifestyle, including luxury cars and suits, that some have dubbed a smear campaign. Some French raised suspicions about the sexual assault case as well.

"Perhaps this affair will unravel very quickly, if we learn that there is in the end no serious charge and that what was said by this woman was not true, and we all wish for this," former Socialist Party boss Francois Hollande said on Canal-Plus television. "To commit an act of such seriousness, this does not resemble the man I know."

A former economics professor, Strauss-Kahn served as French industry minister and finance minister in the 1990s, and is credited with preparing France for the adoption of the euro by taming its deficit.

He took over as head of the IMF in November 2007. The 187-nation lending agency provides help in the form of emergency loans for countries facing severe financial problems.

Sarkozy, who did not comment publicly Sunday, had championed Strauss-Kahn to run the IMF. Political strategists saw it as a way for Sarkozy to get a potential challenger far from the French limelight.

Caroline Atkinson, an IMF spokeswoman, issued a statement Sunday that said the agency would have no comment on the New York case. She referred all inquiries to Strauss-Kahn's personal lawyer and said the "IMF remains fully functioning and operational."

The fund's executive board was expected to be briefed on developments related to Strauss-Kahn on Sunday, but the meeting was postponed. John Lipsky, the IMF's first deputy managing director, would lead the organization in an acting capacity in Strauss-Kahn's absence.

Strauss-Kahn was supposed to be meeting in Berlin on Sunday with Merkel about increasing aid to Greece, and then join EU finance ministers in Brussels on Monday and Tuesday. The IMF is responsible for one-third of Greece's existing loan package, and his expected presence at these meetings underlined the gravity of the Greek crisis.