Cannes: Could a black-and-white silent really become a hit?

A star and a director you've never heard of in a film that emulates 1920s Hollywood. And it's ridiculously fun! 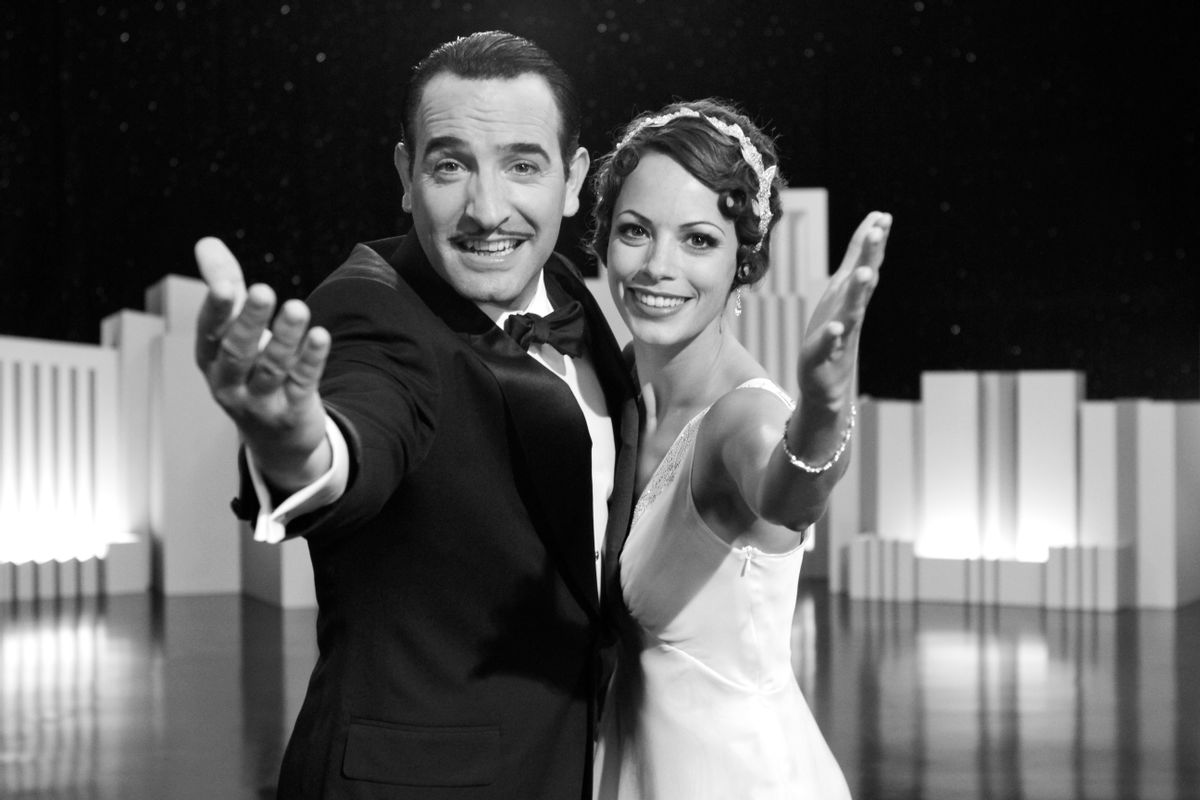 Jean Dujardin and B
--

CANNES, France -- One of the first films to be picked up for American distribution out of the main competition here this year has the following qualities: It's French, and unless you're a fan of Gallic comedy, and specifically the recent "OSS 117" spy spoofs, you've never heard of either its star or its director. It's in black-and-white. It's not merely a silent film but one that both imitates and spoofs the Silent Age dramas of the late 1920s, movies that relatively few living people have even seen. That's at least three strikes -- if not four or five -- against "The Artist," an exceedingly weird and delightful new film from writer-director Michel Hazanavicius that premiered on Sunday in Cannes to a rapturous, uproarious reception.

This is a project so idiosyncratic, so unlikely, so simultaneously innocent and sophisticated that it could only have been devised by the French. Yet it's such a sheer delight -- something one doesn't often say about movies at Cannes -- that Harvey Weinstein may well be right in believing he can turn it into a hit. "The Artist" of the title is a silent-film star named George Valentin, played by Jean Dujardin, the hilarious, handsome ship's figurehead of an actor who plays the super-spy hero of Hazanavicius' "OSS 117" series. (I don't have to call Dujardin the poor man's Sean Connery, because he's done so himself.)

With his jutting jaw, sleek hair and pencil-thin mustache, Dujardin's George comes uncannily close to Douglas Fairbanks, and like him dominates the silver screen as a series of dashing adventurers in nearly identical international espionage scenarios, which Hazanavicius recaptures in delicious and affectionate detail. He has a beautiful wife, an enormous house in the Hollywood hills, and a loyal dog who co-stars in his films. He has a minor flirtation with an up-and-coming flapper-flavored extra named Peppy Miller (the irresistible Bérénice Bejo) and gives her her first break, never foreseeing that she will soon surpass him. George's avaricious studio head (John Goodman -- who would have been huge in the silent era, based on this evidence) is about to break the news: Talkies are coming in, and George is yesterday's copy of Photoplay.

"The Artist" is perhaps less deliriously enjoyable after it switches from its early romantic-comedy mode to the ensuing melodrama of George's fall into alcoholism, bankruptcy and disaster -- but that too is very much in the spirit of the movies it emulates, which packed two or three genres into a single picture. But it's loaded with laughs, charm and surprises (tap-dancing numbers! I said tap-dancing numbers!), finishes with a terrific bang, and positively bursts with affection for an era of American cinema and culture Americans have virtually forgotten. There are a few things that still need to be fixed for North American release: Some of the English intertitles and supporting materials -- magazine and newspaper articles -- are either unconvincing or flat-out wrong. But in the long and even fraught history of Franco-American cultural relations, this is more than a peace treaty; it's a big, goofy French kiss.