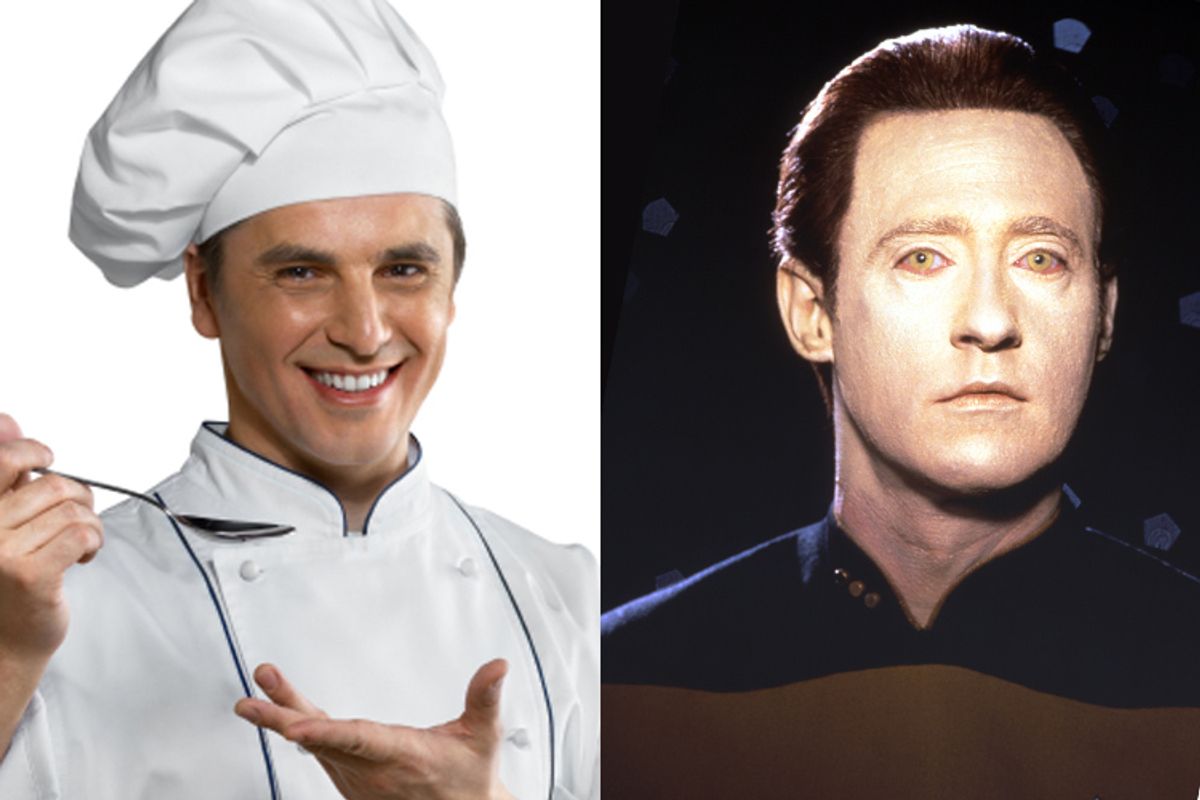 Virginia Heffernan's Op-Ed for the New York Times yesterday revealed a secret rivalry brewing between foodies and techies. We imagine Heffernan sometime in the near future, still trying to report on cultural rifts before they actually happen.

Today's culinary war is not fought in the kitchen of our grandmothers, their dust-covered aprons and canned cherry filling resembling a German battlefield. No, today the foodies -- those culinary elitists who by definition aren't elitists (those would be "gourmands"), but let's just have that term act as giant Tiki umbrella in a giant punch drink for the sake of my argument here -- are forging ahead to a new frontier. The final frontier. Space.

There's no room for Julia Child's coq au vin when you are dining with Klingons: They prefer their Bregit lung raw and smothered in Grapok sauce, with little care for the preparation and presentation that goes into such a time-consuming dish. The warriors from Qo'noS don't even have a word for amuse bouche, something that would make your high-society friends from the Hamptons faint in their dainty corsets. But to these upper-crust society ladies with their deviled eggs and lobster salads with foie gras foam I say: "jIyajbe', nuqDaq 'oH puchpa''e?" ("I don't understand, where is the bathroom?")

If foodies try to bring their highfalutin admiration and respect for the culinary arts onto the Starship Enterprise, Klingons won't be their only worry. Lt. Cmdr. Data has a life philosophy that could be described as "Mainframe system: Operational" and is more geek than chic when it comes to dining! He's much more comfortable calculating intense mathematical equations or trying to experience human emotions with his positronic brain than he is appreciating the fine subtleties in a Michelin-starred dining experience.

While our parents may have defined status and wealth by one's ability to put on a fine dinner party or cook a succulent leg of lamb, we must let go of these old contrivances and be ever moving forward in our development to become half-human, half-machine cyborgs that require no nourishment to sustain existence. This is our time, foodies, and there is no turning back the clock on technology.*

*Unless we happen into a wormhole or a rip in the time-space continuum, or get stuck in the Holodeck and end up in the Wild West, in which case ... does anyone here know how to boil water?