How would DSK be treated in France? 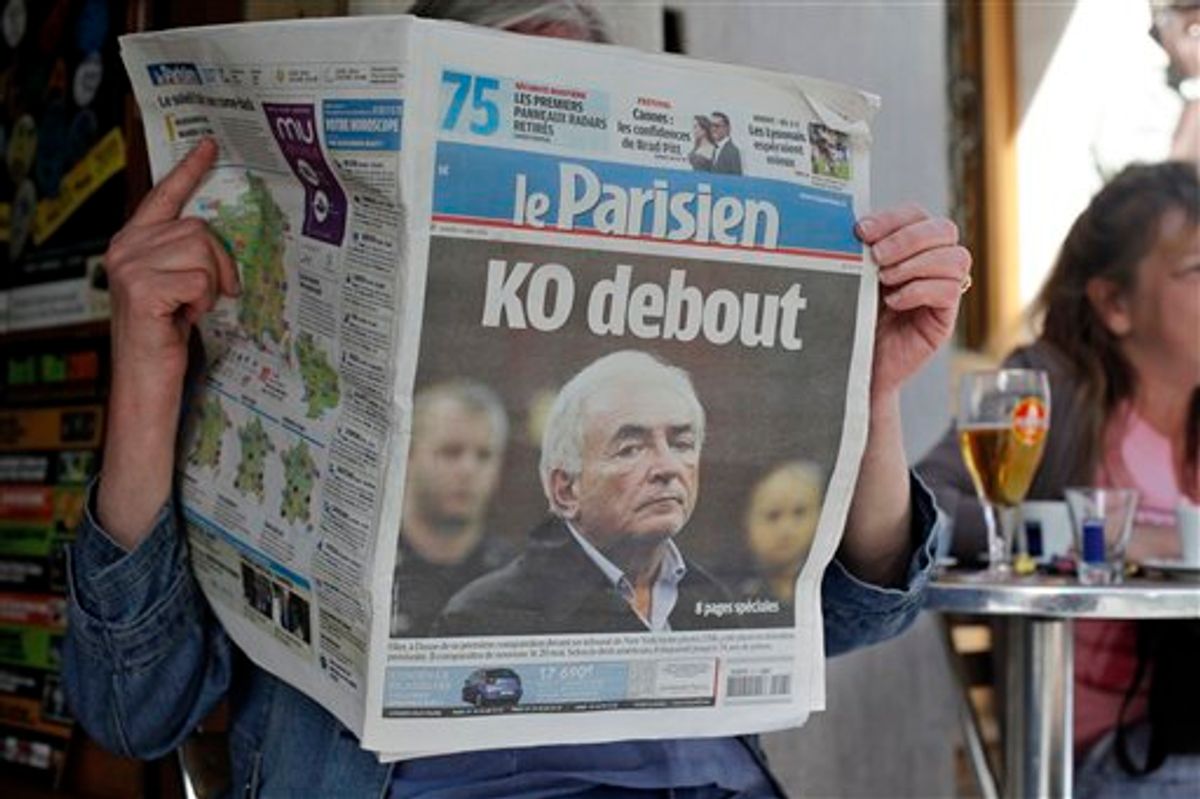 A woman reads the French newspaper "Le Parisien" headlining on IMF head arrest, in Paris, Tuesday May 17, 2011. Allegations of sexual assault in a New York hotel have torn France's presidential race asunder and savaged the reputation of the suave and self-assured Dominique Strauss-Kahn, chief of the International Monetary Fund. The 62-year-old Strauss-Kahn has topped French opinion polls for months as the man most likely to become this nation's next president, consistently outshining the little-loved conservative incumbent, Nicolas Sarkozy. Headline reads: Standing K.O. (AP Photo/Thibault Camus) (AP)
--

As the world anticipates Dominique Strauss-Kahn's next court appearance on Friday, there continues to be much discussion of his portrayal in the French press over the years -- and the ways in which, even now, he is protected by French laws on privacy and freedom of the press.

On Monday, the Telegraph noted that French privacy laws are "among the strictest in Europe." "Dominique Strauss-Kahn wouldn't have lasted five minutes in Britain, America or Sweden," French journalist Jean Quatremer told the paper, which went on to provide the following explanation:

Politicians benefit from France's strict privacy law, based on a single sentence in Article 9 of the Civil Code: "Everyone has the right to privacy", which dates back to 1970.

This right, which became part of the constitution in 1995, includes not only the disclosure of a person's private life but also the unauthorised taking of photographs and their publication ...

Even the photo circulating of Mr Strauss-Kahn handcuffed in theory breached the law on the presumption of innocence and image rights.

We spoke to Antoinette Perrodet, an associate professor of law at Université of Paris 1 Panthéon-Sorbonne and a former lecturer at the University of Cambridge, about how DSK might be treated had be been apprehended in France -- and what she sees as the injustice of legal limitations imposed on French journalists.

First of all, can you explain the laws that govern freedom of the press in France, and how they relate to this particular situation?

Yes. The Law on the Freedom of the Press (1881) was amended in 2000 by a law on the presumption of innocence prohibiting the transmission, publication or broadcasting of images of any person accused in a criminal procedure, before he or she has been sentenced. In other words, it prevents the publication of an image of someone being handcuffed or otherwise impeded physically before judgment has been passed -- with a fine attached for those who break the law. There's an article in the criminal code as well, to the same effect. But this only goes into effect if the person concerned (in this case, Strauss-Kahn) actually brings a complaint against someone who uses such an image.

This is all to protect what we call the "presumption of innocence." Of course, there are two things conflicting here: On the one hand, the right to information, and right to freedom of expression; on the other hand, the presumption of innocence, or the right to private life, which is also enshrined in the European Convention on human rights -- thus protected both at the European and the national level.

What are the further implications of the law, in your mind?

In my opinion, one of the negative side effects of the law is that it is more protective of people who have prominent public roles than it is of people who are unknown -- because images concerning an unknown person have little impact on the public scene, whereas when you broadcast images of Strauss-Kahn, of course it's very prejudicial to him, because everybody knows him. So I think although it applies equally of course to every suspect, or every person subject to criminal investigations, it can play in favor of the person who is publicly known.

In fact, I'm not sure if it is very effective regarding the presumption of innocence. As we normally see it in this culture, it is -- but looking at it closer, I'm not sure. Presumption of innocence lies more in the guarantees around a criminal trial than anything else. And in my opinion, the right to information and freedom of expression could justify your position -- the American provision on these things. So my view is probably not totally in favor of the French laws.

One good thing about the American procedure is that you treat public people in the same way you treat other people; you can see, in this case, that Strauss-Kahn didn't benefit from any beneficial or different treatment. I don't think his chances of being actually relieved or being proved innocent in the end are lessened by the fact that we saw images of him led into court for his arraignment.

Is yours a typical French reaction, do you think?

No, I don't think so. The stream is toward the other direction.

A big question, in this case, is: Can we transmit images from abroad? Does the law apply to these images as well, or just to French material? Legally, the TV channel broadcasting [a picture of Strauss-Kahn in handcuffs, for instance] could actually be sued on the basis of that. The law says the images cannot be broadcast in France -- no matter their provenance.

Let's talk about another major legal question that applies here: the sexual abuse charges themselves. Would Strauss-Kahn have been treated any differently had he been accused of these actions while in France?

Regarding the criminal offenses at stake -- attempted rape and other accusations -- they are as serious in France as they are in the States. The law here punishes these actions as much as they are punished in America (although we don't accumulate the sentences, so it would ultimately be one sentence if the person were convicted). But what would have been done differently, I think, is the publicity around the case -- and probably the protection of the person accused because of his position.

That's not necessarily a good thing. You know, here, we've had so many examples of public people being more protected than the average person. The authority in charge of controlling the broadcasting here has requested that the main channels on television be very careful of the restraints. So main channels have complied with some of this counsel. Although as I mentioned before, these channels can only be condemned if Strauss-Kahn himself actually enters a complaint. Otherwise, there won't be any action taken.

How likely is he to enter such a complaint, do you think?

I have no idea. In any case, he has the possibility of doing so. It's a problem which is quite outside of the American criminal trial, because it regards only what happens in France. But in principle, there's no obstacle preventing him from doing this. If he's worried about what happens in France, I think probably he will … But for the time being, he's got other things to worry about.

I would say that the mainstream of the comments coming from France are a matter of concern to me. What I am trying to say is that some cases in the past have shown that the French criminal procedure allows a certain impunity for certain politicians in criminal trials -- which seemingly is not the case in America. So this is only further proof of that, for me. But the political world, in a sense, is always against changing the laws on these topics, and their comments are exactly in the same vein.

I think also that being so critical of the procedure by which he's actually held in America -- or complaining about the fact that you can have a camera in the [American] court, for instance, as some people here have -- is inappropriate. This is a criminal procedure done according to American law, and is not illegal. He's on American territory and submitted to U.S. law. I don't think the French should comment on this -- and in particular, they should not make adverse comments on the way the prosecution is carried out in the States. I don't think we have lessons to teach; if anything, we have lessons to learn.

For a sample of French pro-privacy rhetoric, read the following excerpt from Bernard-Henri Levy's recent discussion with Eliot Spitzer:

"[In] the American system, there is good side and bad side. The bad side is that for someone like Dominique Strauss-Khan, if it appears that the claim is false, if it appears that he did not commit the crime of which he is accused, the current moment, the moment of today will be something terrible which will follow him until the end of his life.

"There is something so violent, so cruel, so brutal in these images which have been showed of him, and really worldwide. I know that it is a case of any man and that there is a sort of democratic obligation to treat each man as if -- equally. But the problem is that this is hypocrisy. Everybody knows that Dominique Strauss-Khan is not exactly anyone. Anybody, everybody knows that an average man suspected of having committed a crime goes out of the police station there will be no photograph. There will be nobody. If it is Dominique Strauss- Khan, director of the IMF, you will have the press of all over the world.

"So the apparent equality of treatment between the average guy and Dominique Strauss-Khan turns out to be a real inequality. It tends to be really unfair for him."