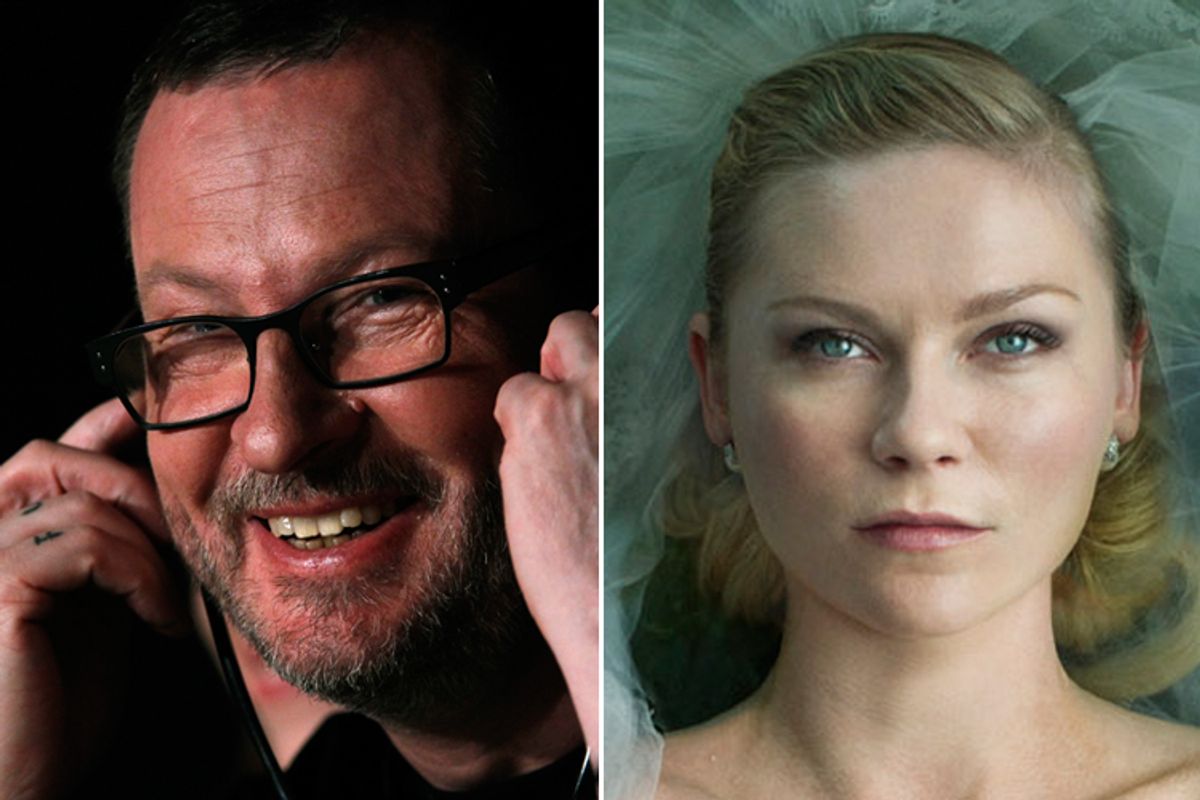 CANNES, France -- Lars von Trier dazzled the Cannes press corps on Wednesday morning with the premiere of "Melancholia," his gorgeous, profoundly emotional and often very funny tragicomedy about two sisters, a wedding gone wrong, the personal costs of depression and -- oh, by the way -- the end of the world. Then, as if uncomfortable with having made a film people actually liked, the Danish director of "Breaking the Waves" and "Dancer in the Dark" and the near-psychotic 2009 horror movie "Antichrist" upstaged himself at an increasingly awkward press conference, announcing that he understood and sympathized with Hitler, and intended to make a hardcore porn film with "Melancholia" stars Kirsten Dunst and Charlotte Gainsbourg that will be "three or four hours long."

What I think he was trying to say after that was that he understood Hitler's grand aesthetic vision for the remaking of Europe, and at best that's an ill-advised analogy, reminiscent of composer Karlheinz Stockhausen's declaration that 9/11 was a great work of art. But when Trier tried to extricate himself , it only got worse: "Look, I'm not for the Second World War, and I'm not against the Jews. I'm 100 percent for the Jews. Well, maybe not 100 percent, because Israel is kind of a pain in the ass ... How do I get out of this sentence? OK, I'm a Nazi." That got a big laugh, and was clearly meant to, but the clicking of hand-held devices around me only intensified, and you could hear headline writers all over the world virtually high-fiving each other. So, yeah, maybe the context doesn't help that much after all. (You can see much of the press conference for yourself.)

It's genuinely too bad that the guy managed to suck up so much of his own P.R. oxygen, because "Melancholia" strikes me on first viewing as something truly special, even in an exceptionally strong Cannes competition that includes several other terrific films. I'm going to invoke the magic incantation here: This isn't really a review. "Melancholia" demands another viewing or two and some time alone afterwards, something that's ludicrous even to imagine in this hothouse setting. For what it's worth -- which is nothing much, at this point -- I think I prefer "Melancholia" to Terrence Malick's much-debated "The Tree of Life," but to have two new career-defining works from major film artists that can plausibly be defended as cinematic and philosophical masterpieces in the same festival is close to miraculous.

"Melancholia" is a story in two sections, about two sisters and two planets. The sisters are Justine (Dunst) and Claire (Gainsbourg), whose names are also given to the film's sections. The planets are our own and another one called Melancholia, a beautiful blue orb 10 times its size, which has been "hiding behind the sun" and is now bound for a collision with Earth. (I don't know how much hard astronomical research went into "Melancholia," but it doesn't really matter; as a symbol, our dark sister planet is pretty effective.) Melancholia makes only a guest appearance in "Justine," the first section of the movie, as a strange red star presiding forebodingly over the title character's enormous wedding.

Trier plays with our expectations for these actresses: Justine, played by a Hollywood star, is the blonde and conventionally beautiful one, marrying a fittingly handsome guy (Alexander Skarsgård) at her brother-in-law's ostentatious country estate. But instead of being normal and well-adjusted, she is battling a crippling depression and keeps trying to escape from the whole wedding and from Skarsgård's character, who's totally out of his depth and has no idea how to reach her. In perhaps the most bitterly comic scene of "Justine" (and there are many), he shows her a snapshot of the apple orchard he has bought for her, that he hopes will make her happy. He has the best possible intentions, but you can feel her visibly recoiling from him as the seconds pass: I married this guy! And he has no idea who I am! When she gets up to go, she leaves the crumpled picture on the sofa.

It's Claire, played by an eccentric art-house brunette, who is the conventional one trying to hold the wedding together as it disintegrates into hostility and pathology. She makes meat loaf, something I'm not too sure Charlotte Gainsbourg does in real life. She's married to a rich man (Kiefer Sutherland, as always awesome at playing an intolerable asshole) who owns the Swedish castle where the wedding takes place, and is inordinately fond of its 18-hole golf course. (We also see the 19th hole a couple of times, which at many golf clubs is a euphemism for the bar, and here is --what, exactly? A joke? A symbol of apocalypse?)

Shot in gloriously rich colors by cinematographer Manuel Alberto Claro, the "Justine" half of "Melancholia" is a rich comedy of manners and buried family secrets, deliberately recalling Bergman's "Smiles of a Summer Night" and also perhaps "The Celebration," by Trier's onetime Dogme 95 collaborator Thomas Vinterberg. Trier referred several times in the press conference to the mode of "German Romanticism" he wanted to strike, and he repeatedly uses an orchestral extract from Wagner's opera "Tristan und Isolde," perhaps the musical apex of that tradition, on the soundtrack.

His big and crackling cast also includes John Hurt as Claire and Justine's lecherous, reprobate father, Stellan Skarsgård (father of Alexander) as the ruthless P.R.-agency boss who's trying to get her to churn out a slogan on her wedding night, Udo Kier as a queeny, resentful wedding planner. It's a lot of fun -- not a concept often associated with Trier's work -- even as the mutual hostility starts to come boiling through the glossy surface like hot magma. Best of all is '70s art-film goddess Charlotte Rampling as Claire and Justine's acerbic mother, who serves as a sort of voice of God. Weddings are stupid and love is not forever, she snaps at Justine: "Enjoy it while it lasts." When Justine tries to confide in Mom that she feels frightened, the latter replies, "We all are, sweetie. Just get on with it."

Trier told us during the press conference that "Melancholia" is "not so much a film about the end of the world as a film about a state of mind," and I think that's right. Still, he wants us to know what happens in "Claire," the final section of the film, before we get to it, and we learn the ultimate fate of the Earth in a brief, haunting prelude before we even get to the wedding scenes. His first shot, in fact, is a stunner, a close-up of Dunst's face looking as stricken and depressed as a beautiful face can, with birds falling from the sky all around her. I won't say more about that right now, except to quote Trier on his own philosophy: "Sometimes we see a film to find out how it ends, and I object to that. Do we go to a James Bond film and think there's a chance he may not survive? You can know what happens and still not know how it happens, or still hope that you are mistaken and that it might not happen, and that is interesting to me."

"Claire" is apparently set some weeks later, and the cast of characters is stripped down to the two sisters, Claire's husband John (Sutherland) and their son Leo, who is seven or so. These people have to follow Rampling's advice and just get on with it, which means preparing however they can for the possibility or likelihood that that expanding blue ball in the sky -- Trier's visual effects team has done some amazing work here -- will bring with it the end of life on Earth. Indeed, Justine declares that there is no other life in the universe, and that that's a good thing: "The Earth is evil. No one will grieve for it." I will tentatively suggest that Trier's apparent belief that we are alone is a form of theology, and in fact a form of covert belief in God, but let's table that for another time.

In this section it is Claire who surrenders to despair, and Justine who pulls herself out of her personal pit of gloom long enough to gather her sister and nephew to her. Indeed Justine embraces Melancholia as a friend or kindred spirit; in one breathtaking scene, she reclines naked on a riverbank at night, luxuriating in the double light of our own Moon and the new planetary visitor, looking like an eerie, extraterrestrial Rhinemaiden. "Claire" is harder to watch because we know how it's going to end, but then, we know how our lives will end and that doesn't stop us from wanting to live them.

There is tremendous pain in "Melancholia," but also ravishing beauty, at a level the abundantly talented Trier has never sustained before. He's right that it's not a movie about the end of the world (unless the religious wackos who think that's coming this weekend are correct). It's about facing life and death and mental illness with as much courage and love as you could muster, and what could be more grand and romantic than that? If the depresso Nordic class clown is trying to undercut his own movie by talking about Hitler and pornography, it's only because he's made something tender and exquisite and metaphysical and vulnerable, and now he wants to smash it.