A dispatch from the Cartoon Network's wild and weird season preview party, full of celebrities -- and laser owls 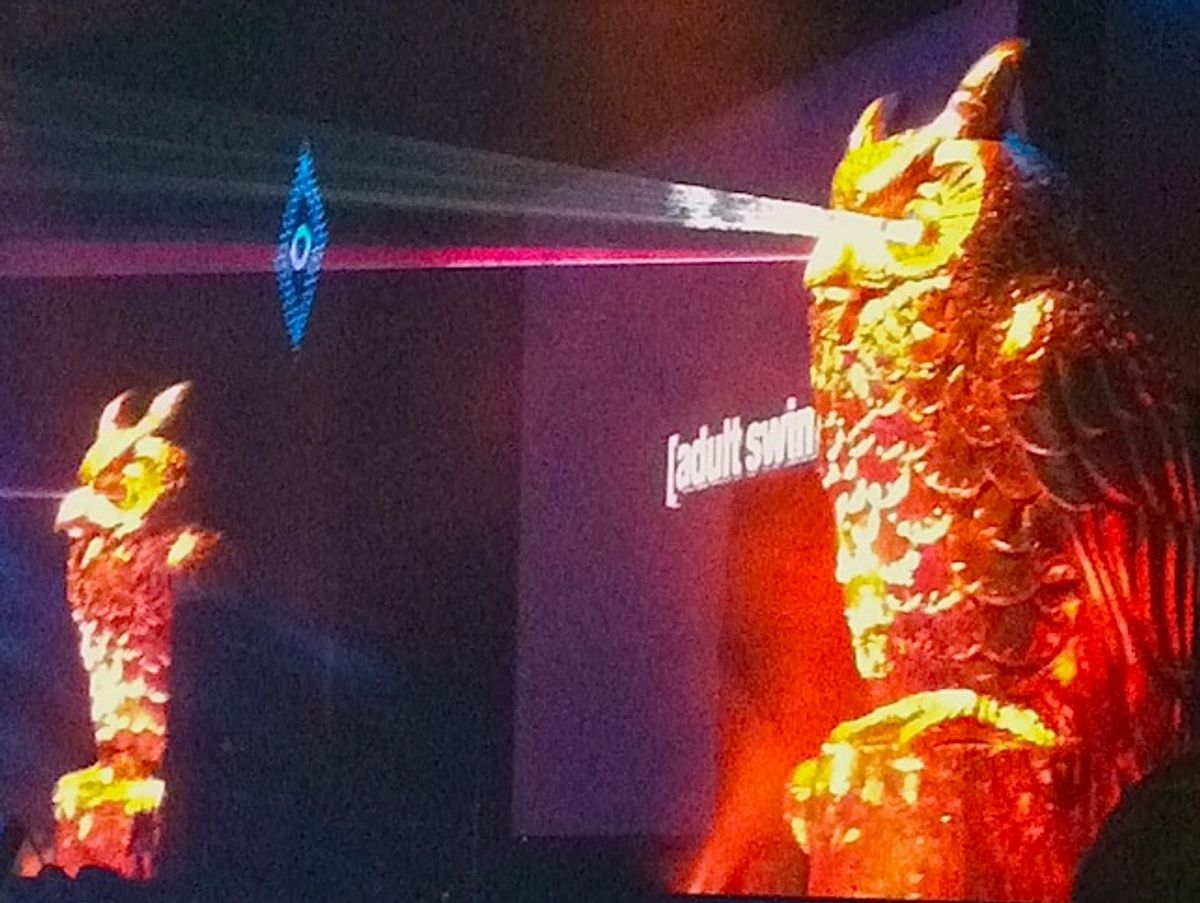 The owls are not what they seem.
--

All week, networks have been rolling out their upfronts in big auditoriums and hotels, giving journalists a taste of the upcoming season. Sometimes, if you're lucky, a studio head will come onstage and talk about what a great lineup they have, reading the sound bites someone typed up for them about their new shows. Then the lights will go down and everyone will watch those previews for the romantic comedy about strippers or the period drama about chimney sweeps. After the lights come up, everyone files out and rushes home to write about how awesome/terrible next season looks.

Cartoon Network's late-night comedy bloc Adult Swim, however, made sure that its upfront event last night at the Roseland Bar was nothing like other networks, in part because their branding only has to appeal to one demographic: 18-34-something hipsters who like cartoons and "Tim and Eric." The focus was less on the shows themselves -- there may have been two minutes of actual programming screened – and more on the ambience of the room. Filled with giant 20-foot-high owls that shot lasers out of their eyes and mini hot dog carts, it was like being in a bar-mitzvah in the Temple of Doom. A guy in a giant owl costume was DJing, while bearded young men and non-bearded young ladies could sit on couches covered with owl pillows. If you couldn't tell, the theme of Adult Swim is "Owls."

The programs were introduced with that "2001" HAL 9000-like white text on black font that serves as the voice of Adult Swim. Clips from each show flashed by: returning series like Rob Corddry's "Children's Hospital," "Venture Bros.," "Aqua Unit Patrol Squad 1" (formerly "Aqua Teen Hunger Force"), "Superjail" and "Squidbillies" (among others), along with all new shows.

I'm most excited to see Patton Oswalt and Heather Lawless starring in "The Heart, She Holler," which is a "live-action soap opera about folk who ain’t never used soap or seen an opera," according to the press release.  There were no clips available during the screening, but the Adult Swim text promised us it would sort of be like "Twin Peaks."

Also new to the channel are "China, IL" by Brad Neely, who you may remember from the George Washington rap, and follows two history teachers as they butcher more of our nation's past in song. "Tight Bros." chronicles the adventures of two ripped "clergyboys," and "Black Dynamite" continues where the popular 2009 satirical blaxploitation film left off.

Of course, the real show was after the screenings. Adult Swim has a reputation of getting huge artists to play a concert during their upfronts, with past guests including Kanye West, M.I.A., and T-Pain. This year, Jay-Z took the stage and performed for an hour, rocking the club with all his hits, as well as performing "Thank You" over the theme song from Adult Swim's "The Boondocks."