Gaga beats Oprah on Forbes' Celebrity 100. Is Twitter to blame?

Is social media cred worth more than TV and radio time? More than money? This year's power list suggests so 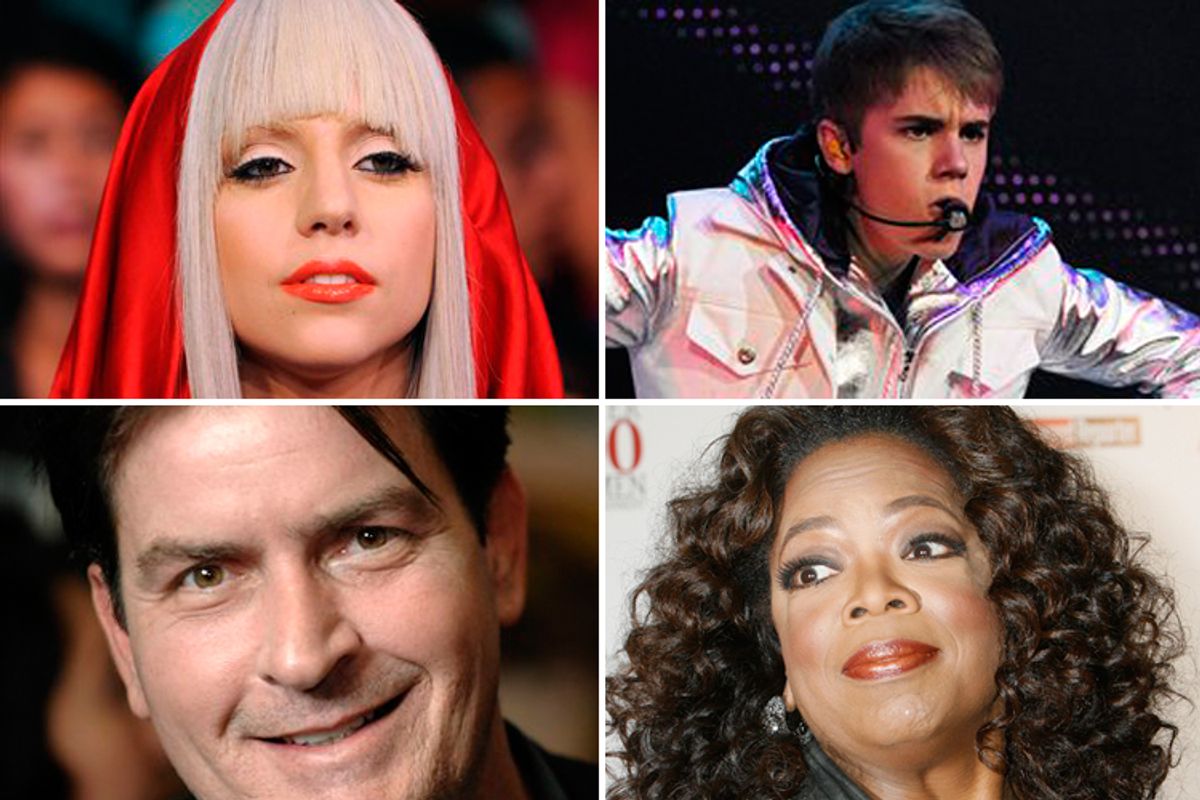 Lady Gaga, Justin Bieber, Oprah, and Charlie Sheen are four of the most powerful celebrities in the world.
--

Forbes has come out with its annual list of the most powerful celebrities, and in a total upset, Oprah has been bumped down to second place. She's now sandwiched between Justin Bieber (third on the list) and Lady Gaga, both of whom make far less money and get less airtime than the queen of daytime television, but who have mastered the social media sphere to gain millions of devoted, cultlike followers.

You almost feel bad for Oprah: Back when she was starting out, a media personality had to fight hard to win a loyal audience and a fan base. In the era of Twitter and direct celebrity-to-fan interaction, you don't need to prove yourself over a period of years, you just have to make sure that you're a trending topic out of the gate. Then again, Oprah is still the richest celebrity out there, with a net worth of $290 million, so we doubt she's doing much crying.

But the kind of fan hegemony that stars like Lady Gaga, Justin Bieber and (god help us) Bethenny Frankel have may be more valuable than a traditional media paycheck, because it can be traded on again and again. Oprah, more than anyone, understands the power of personal branding. She just doesn't have the same viral pull as a more polarizing celeb like Gaga or an Internet sensation like Bieber. The complex correlation between money and fame means that we can't say for sure that having a big Internet profile is worth more than cash in a power ranking, only that more money and power seems to come to those with a higher Web visibility, than to celebs who eschew social media.

Look at Charlie Sheen, who went up from No. 63 in 2010 to No. 28 this year. Yes, he made more money in 2011, but the most drastic change is in his Social Rank (which measures Twitter and Facebook followers): from No. 70 to No. 30. For a comparison, Adam Sandler, David Beckham and Brad Paisley all earned the same amount as Sheen, but none of them come close to his overall power score.

Of course, that's leaving aside other variables: Sheen's TV score also skyrocketed this year, which helped put him higher on the list. (Though Glenn Beck has a better TV score, the same money rank, and is still two places below Sheen in the final tally.) So we'll just have to wait until next year and see how he fares after not starring in the No. 1 show in America, before we draw a direct correlation between an Internet following and world domination.