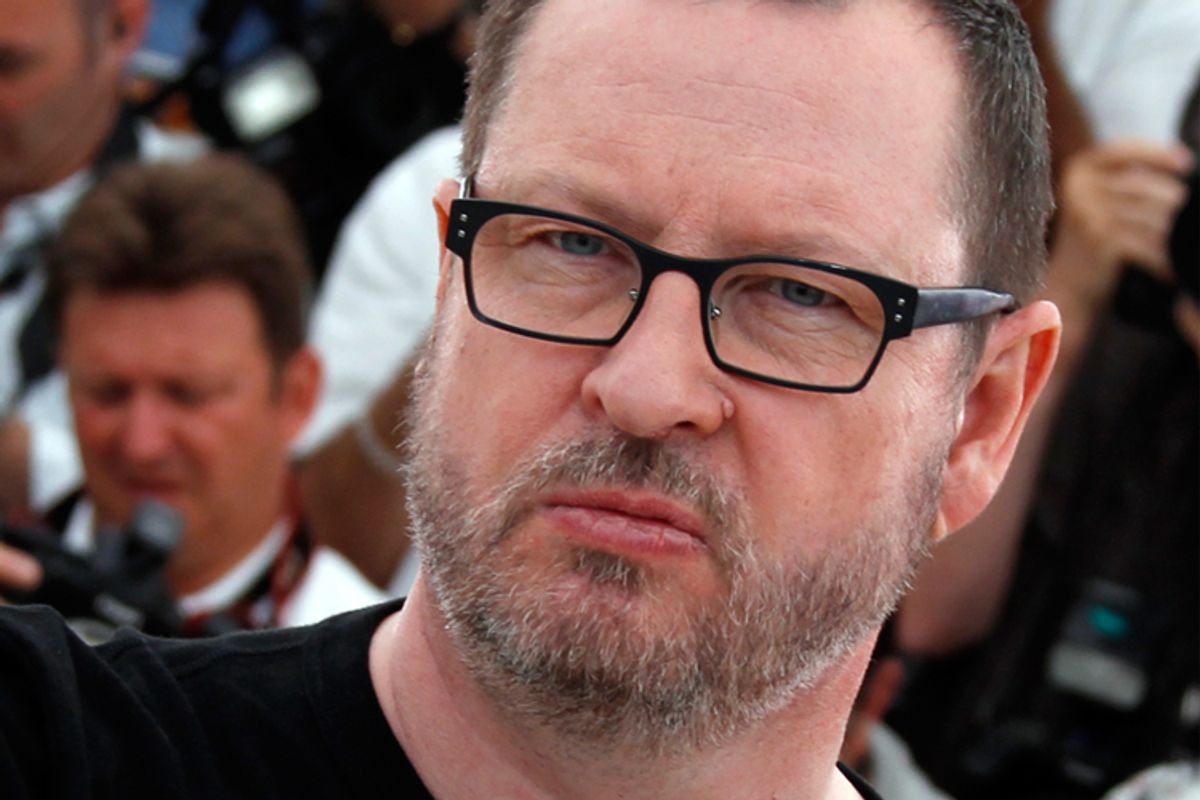 CANNES, France -- With the sex-crime charges against IMF head Dominique Strauss-Kahn already dominating French headlines, the nation got its second tabloid-ready scandal today. In a bizarre and apparently unprecedented turn of events, the Cannes Film Festival's board of directors has declared Danish filmmaker Lars von Trier "persona non grata" after the international media furor over Trier's comments about Hitler and Nazi Germany at a press conference here on Wednesday morning.

Yesterday the festival demanded and received an apology from von Trier -- which began with the dreaded phrase "If I have hurt someone ..." -- but this morning that was apparently judged insufficient. This presumably knocks von Trier's widely acclaimed science-fiction melodrama "Melancholia" out of contention for the Palme d'Or, the most prestigious prize in the international cinema world, which it very well might have won. Whether this announcement amounts to a one-year ban, a lifetime ban or something in between, such as a demand for further apology and atonement, is not clear.

I was in the room when von Trier made those now-infamous remarks, and as I reported yesterday, in the full context of the press conference they were clearly an ill-advised attempt at provocative humor, not a sincere declaration of Nazi sympathies or anti-Semitic attitudes or anything of the sort. It seemed at the time like a classic case of someone's mouth moving faster than his brain, at precisely the wrong moment. Von Trier is ill at ease around the press in the best of circumstances. He has all the social grace of a pudgy 14-year-old with an autism-spectrum disorder, and has a juvenile obscenity tattooed across his knuckles, "Night of the Hunter"-style. But during the press conference he had warmed up from monosyllabic utterances to longer, more rambling answers, especially once it became clear that the response to his film was largely positive.

To expand on what I wrote yesterday, the ill-fated response began with a question from a reporter in the room about von Trier's discovery of his German ancestry, and some previous controversial remarks he has made about Nazi aesthetics. For example, in a Danish film magazine distributed here, von Trier spoke about the connections between the lush, Wagnerian Romanticism he pursues in "Melancholia" and the design aesthetic that produced the Stuka, the classic German warplane. In print, in an interview with one Danish journalist, those comments read as a sophisticated, possibly pretentious, attempt to discuss some troubling issues in recent cultural history. Whatever you think about that, von Trier should have known that no such nuance was possible at a press conference where, almost literally, the whole world was watching.

He began by discussing the fact that he had grown up believing he was partly of Jewish descent and had learned more recently that his ancestry was predominantly German. "I really wanted to be a Jew, and then I found out that I was really a Nazi, because, you know, my family was German," he said. If he had stopped there, at one mention of a forbidden word, and apologized or backtracked, then we're not talking about any of this today. Lars being Lars, he kept going. He was interested in the Nazi aesthetic, he said, and as for Hitler, who "was not what you would call a good guy ... I understand much about him, and I sympathize with him a little bit." That might have sealed his doom, but von Trier continued: "But come on, I'm not for the Second World War, and I'm not against the Jews. I'm 100 percent for the Jews. Well, maybe not too much, because Israel is kind of a pain in the ass ... How do I get out of this sentence? [Dramatic pause.] OK, I'm a Nazi."

So he tried to extricate himself with a laugh line -- the tone of that last bit was, "This is what you want me to say? Fine, I'll say it" -- and it worked in the moment, in that room. Then it exploded in his face when Twitter users and headline-writers around the world seized upon it: Lars von Trier says he's a Nazi! My reaction to all this is complicated. First of all: The world is stupid. Second of all: The Cannes authorities are stupid too, by granting one misfit film director's idiotic remarks more power to injure than they should reasonably possess. Third of all comes my political reaction, which is predictable coming from an American civil libertarian background: To criticize von Trier, as strongly as you like, for his abysmal judgment and his weak attempt at humor is one thing. To ban him from the film world's biggest festival just after he's unveiled the movie of his career seems like a ludicrous overreaction. Mel Gibson was here the other day, walking the red carpet alongside Jodie Foster for "The Beaver," but I guess since he kept his trap shut about the Jews on that particular occasion, it was all blowing kisses to the crowd and posing for the paparazzi.

This wouldn't and likely couldn't have happened anywhere in the United States -- at least not when it comes to this subject. Americans tolerate a wide variety of offensive and aggressively stupid discussion, much wider than is customary in Europe. But before we congratulate ourselves on our loyal defense of the First Amendment, we should reflect on the severe chilling effect on expression in the wake of 9/11, which still has echoes a decade later. But the 9/11 attacks resulted in the deaths of fewer than 3,000 people, while the war launched by Nazi Germany in 1939 caused more than 60 million deaths.

Even 66 years after the end of World War II, when relatively few living Europeans can remember the conflict, sensitivity on this continent to virtually any utterance about Hitler or the Holocaust remains extreme. Holocaust denial is illegal in France, as in several other countries, and neo-fascist parties like the National Front in France have to assiduously conceal their pro-Nazi sympathies beneath weaselly rhetoric.

I'm sure Lars von Trier knows all this perfectly well: Denmark was invaded and occupied by the Germans before France was, and had at least as much of a problematic history as a Quisling Nazi-collaborator state. I haven't run into any of my Danish colleagues in the press room yet today, and I'm sure they're all busy writing breast-beating editorials for their publications back home. Trier's remarks will be seen as a national embarrassment for Denmark and a P.R. black eye for Cannes, even while many Europeans will privately admit that this perhaps amounts to taking the whole thing too seriously. With his previous remarks about Nazi design and aesthetics, Trier was tiptoeing right to the edge of a forbidden zone in European public life; all of that was part of his public persona as a bad boy, a beloved media antagonist. Now he has definitively crossed that line, and blown his chance to capture a second Palme d'Or (he previously won in 2000 for "Dancer in the Dark"). As we say on the other side of the Atlantic, you made your bed, dude. Time to lie in it.

If there's really no such thing as bad publicity, then perhaps all this pseudo-controversy will whet the world's appetite for "Melancholia," a lavish and upsetting film about depression and a big family wedding and the end of the world henceforward to be known as "that Nazi movie with Kirsten Dunst." But there is such a thing, and this is bad publicity for everybody: For Lars von Trier and his movie and all the people who helped him make it; for the Cannes Film Festival, which comes off today like an old French biddy with a stick up its collective derrière; and for all the people who died because of Hitler and the Nazis, who deserve, for the love of God, to be remembered in a more dignified manner.