Spare me your attempt to go viral 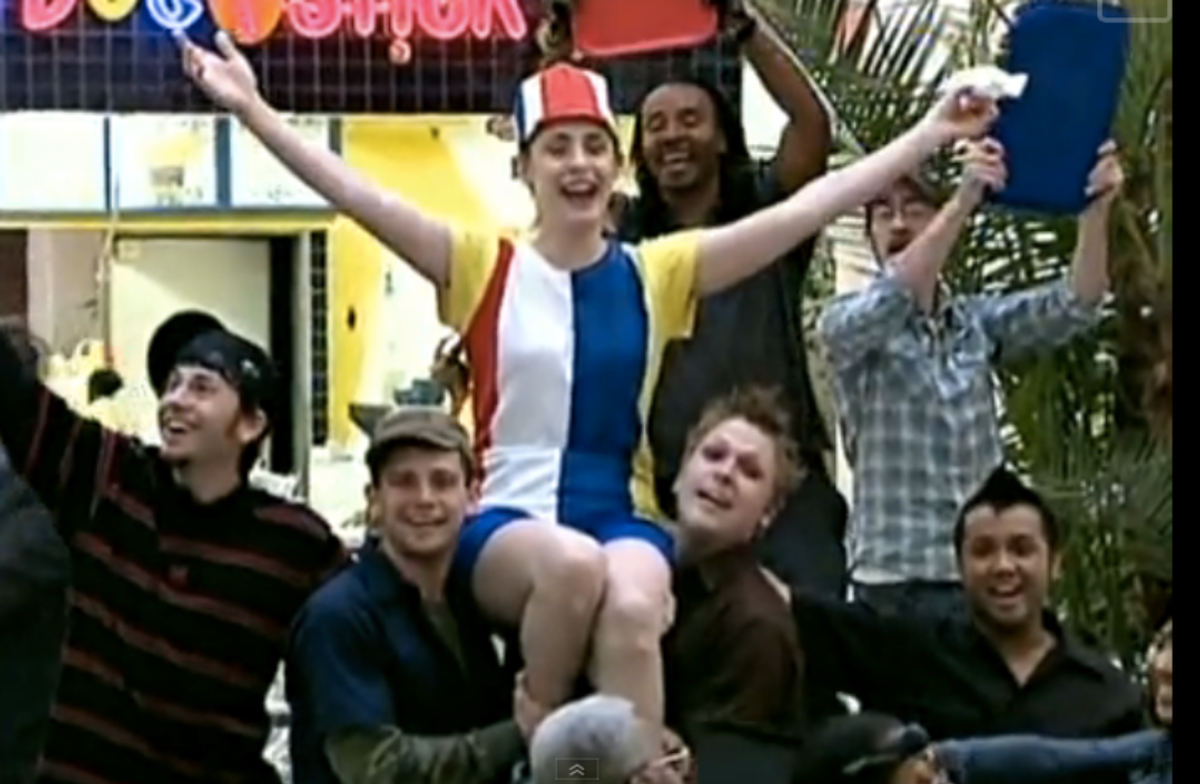 I don't want my morning commute to be part of your "Sound of Music" sing-along.  I don't want the pleasure of my Panda Express lunch at the Food Court interrupted with a musical. And though I truly wish you well and a lifetime of marital happiness, I don't want my afternoon matinee disturbed by your "Greatest Marriage Proposal EVER!"

A few short years ago, the flash mob/surprise proposal/musical breaking out in the middle of a colonoscopy thing was a clever use of the new medium. Now it's not just a tired trope, it's a public nuisance. Think I'm exaggerating? Behold the underwhelmed assembly of humanity at last month's GEL conference, held hostage by the Patch Adams of the Internet, the folks at Improv Everywhere, and a social media pastiche called "Gotta Share." Oh, thank you for leaping into the humdrum of ordinary life and shaking it up with some showtune-tinged joy! Suddenly, I feel ALIVE. Bald guy in the crowd sullenly holding up your bored head with your hand: You, I like.

Yet plenty of people beg to differ with cranky bald man and me. The disruption of life for a moment straight out of cinema persists -- nay, thrives. So when Atlanta's Matt Still decided to pop the question to his girlfriend, Ginny Joiner, he didn't want to be like every other lobster and candlelight dinner brandishing clown who's ever come down the pike. He wanted to stand out. So he created an elaborate trailer for a faux movie, one in which he graciously asks Joiner's approving father for his beloved's hand in matrimony and then sprints into a movie theater brandishing a bucket of popcorn and an engagement ring. He then got Joiner's brother to take her to "Fast Five," where, after a preview for "The Hangover 2," his mini opus screened for Joiner and the rest of the audience. The trailer ended with the real Still bursting into the theater, dropping to his knees, and popping the question. Naturally, all of this – every nuance of surprise on Joiner's face -- was conveniently recorded. And naturally the trailer, with Joiner's delighted responses included, has racked up nearly 6 million views since it was uploaded Monday.

Still and Joiner already have a Web page featuring their "Greatest Marriage Proposal EVER!" and their rapidly increasing number of media appearances, as well as an "official twitter page." It's all very sweet, but am I the only one thinking, what if I were the person in the audience who just wanted to see a Vin Diesel movie? Because I would be that person. Just because we're called an audience doesn't mean our last name is "participation."

Matt and Ginny may be two young people deeply in love, and there must be something inspiring about this engagement they've shared with the world to make it take off with such gusto. Though I may still have trust issues after that whole fake Central Park marriage proposal last year, it seems there's something not so romantic about turning your desire to spend the rest of your life with someone into a chance to get on the "Today" show and boast of "beating Beyoncé & J. Lo in social networks!" And call me old-fashioned, but when I think of love, the first words that leap to my mind are neither "mob" nor "Howie Mandel Fox TV special."

I am not immune to spontaneity or, God help us, even fun. I can understand completely why one would choose to participate in a group event -- and if you want to dress up like Santa or get in a huge pillow fight or hurl tomatoes, there's a high probably I will be right there with you. When people voluntarily come together for the sheer joy of playing, it can be utterly magical.

Yet there's something about the whole Improv Everywhere, all-the-world-is-my-stage ethos that's maddeningly calculated and intrusive. It makes everyone within camera range not just a participant but, as a colleague describes, an "audience victim." If you want to wish your husband a happy birthday, that's lovely. But must all of Washington Square get in on the act?

I don't need to feel like I'm living in a Hollywood blockbuster. And I really don't want to feel like I'm at a wedding with a desperate DJ, browbeating everybody to get on the floor and do the electric slide. By stepping outside of my door, I shouldn't somehow be tacitly agreeing to be part of somebody else's blatant attempt to go viral. (I live in New York, where the threat of wandering into a fake Jar Jar Binks attack is greater than terrorism and iPhone jacking combined.) My status as an innocent bystander shouldn't be your branding opportunity. And even if your mob never does flash in my path, permit me to hold my applause for a phenomenon that seems far less about having a good time than getting attention on YouTube.

The world is full of people who, like Matt and Ginny, may cheerfully believe real life can "make the movies jealous." It is also full of people as aggressively whimsical as Professor Whitman on "Community." It's a fine line between the two, people. And while life may be an episode of "Glee" for some, remember, it's an early Cassavetes flick for others. And if you won't sing and dance all over my personal movie, I won't vérité all over yours. Instead I'll just be hiding in my apartment, enjoying what the Internet was really made for: kittens on a Roomba.