Obama and the Israel Lobby

The President deserves support, and some modest credit, in the controversy triggered by this week's speech 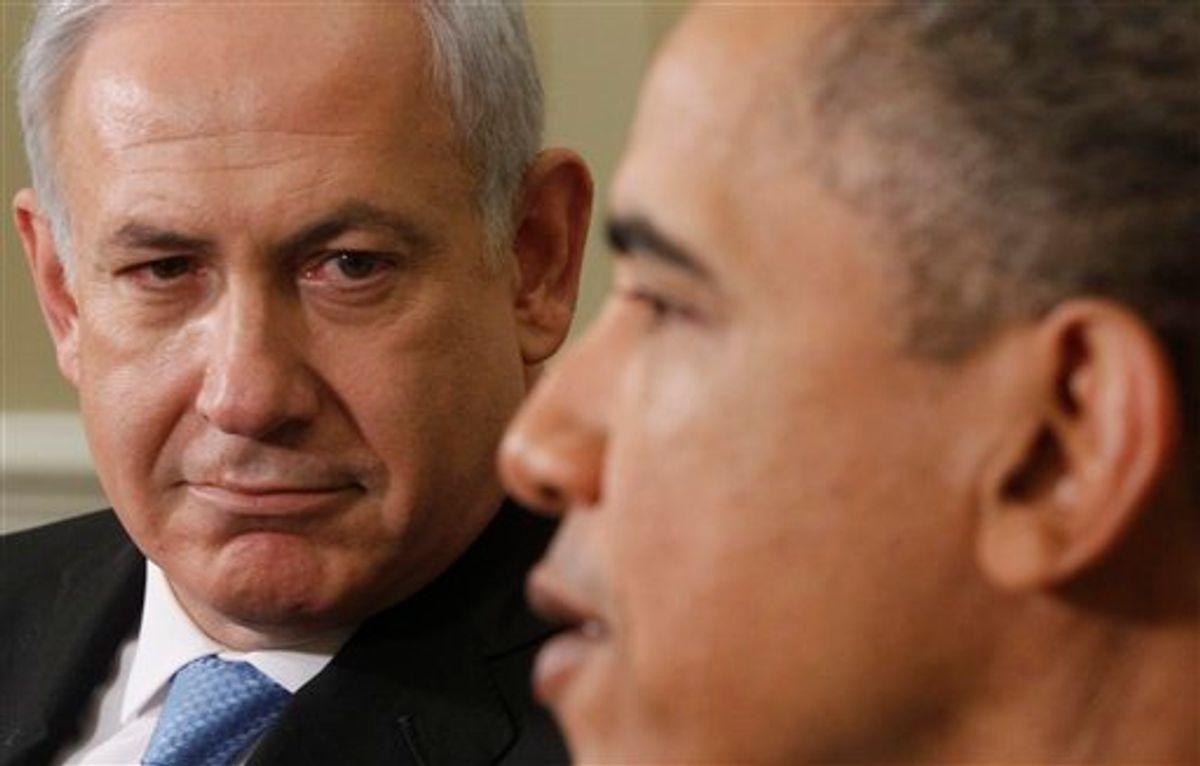 FILE - In this May 20, 2011, file photo President Barack Obama meets with Prime Minister Benjamin Netanyahu of Israel in the Oval Office at the White House in Washington. Sunday, May 22, Obama is scheduled to speak at the AIPAC Policy conference in Washington. (AP Photo/Charles Dharapak) (AP)
--

This week's hysterical, reality-deprived reaction to President Obama's pronouncements on the Israel/Palestine conflict genuinely provoked laughter on several occasions.  That happened when I thought of the intense controversy triggered by publication of Stephen Walt and John Mearsheimer's The Israel Lobby, which examined the "loose coalition of individuals and organizations who actively work to steer U.S. foreign policy in a pro-Israel direction," a coalition driven by "a core consisting of organizations whose declared purpose is to encourage the U.S. government and the American public to provide material aid to Israel and to support its government's policies, as well as influential individuals for whom these goals are also a top priority."  This week's events underscore how remarkable it is that that book's argument was demonized as some sort of radical, hateful conspiracy tract rather than treated as what it was: a statement of the bleeding obvious (albeit a brave one, given that discussions of that reality had previously been taboo).

Obama's call for a peace deal ultimately "based on the 1967 lines with mutually agreed swaps" is not even arguably a change from past American policy.  Though he's the first President to publicly call for such an outcome, that's been the working premise of American policy for decades.  It's controversial in one sense -- it unduly rewards Israel for its illegal seizures of land by suggesting they should be able to permanently keep West Bank settlements (the "land swap" aspect of the formula) -- but it does not remotely constitute a step in an anti-Israel direction.  When even Israel-devoted stalwarts such as former IDF Corporal Jeffrey Goldberg and the ADL's Abe Foxman are dismissive of the condemnation of Obama's statements, it's crystal clear that they pose no challenge to the dominant pro-Israel orthodoxy that has shaped American policy (and political discourse) for decades.

At most, Obama's public endorsement of this position was a symbolic gesture to chide Netanyahu for his overt indifference to U.S. interests (and, more so, belligerence toward Obama), and a small rhetorical fig leaf to the populist forces driving the Arab rebellion.  Yet even the most microscopic deviation from the dictates of the Israel Government produce shrill and ludicrous backlash from The inside-the-U.S. Israel Lobby.

The Right Wing Noise Machine all but accused Obama of trying to destroy Israel, with the GOP's leading presidential candidates condemning the President for the crime of "disrespecting" and "throwing Israel under the bus," Glenn Beck denouncing him for "betraying Israel," and Matt Drudge exploiting ignorance to screech in headlines that "Obama Sides With Palestinians."  Meanwhile, a former AIPAC spokesman demanded that Obama take a renewed public pledge of devotion to Israel, and circulated to the media statements of condemnation from numerous "pro-Israel" Democrats in Congress.  The neoconservative Israel-devotees at The Washington Post editorialized against Obama and predictably blamed him for the resulting tension with Netanyahu, siding (as usual) with this foreign government over their own.  And a Reuters article this morning claims that "some prominent Jewish Americans are rethinking their support for President Barack Obama's 2012 re-election bid" due to that speech:

The backlash after Obama's keynote speech on the Middle East has Democratic Party operatives scrambling to mollify the Jewish community as the president prepares to seek a second term in the White House. . . .

"I have spoken to a lot of people in the last couple of days -- former supporters -- who are very upset and feel alienated," billionaire real estate developer and publisher Mortimer Zuckerman said.

"He'll get less political support, fewer activists for his campaign, and I am sure that will extend to financial support as well."

But remember: it's so very heinous and hateful to suggest -- as Walt and Mearsheimer shamefully did -- that some Americans are driven by devotion to Israel as their primary political preoccupation and that, banded together, they exert substantial influence.  Perish the thought.

This is one area where I think President Obama deserves support and some modest credit.  From the start of his administration -- from appointing George Mitchell as his envoy to  demanding a settlement freeze in the West Bank -- the White House has appeared to recognize that tongue-wagging subservience to the Israeli Government is a counter-productive policy.  Of course, the movement away from such blind support has been extremely slow and cautious -- Obama was silent in the wake of the attack on Gaza, supportive after the flotilla assault, and recently vetoed a thoroughly uncontroversial U.N. Resolution calling for a settlement freeze -- but there have been signs of a genuine desire to push the Israelis in a direction they plainly do not want to go.

I don't believe Obama is guided in these efforts by any principled concern or moral empathy for the plight of Palestinians or the injustice of the 45-year-old occupation; it seems clear that he isn't ever driven by considerations of that sort.  But what he is, at least compared to the prior President, is a competent technocrat, a more calculating imperial manager, able to rationally assess costs and benefits with a ruthless analytical stoicism.  And Obama has been surrounded by top advisers -- such as Gen. James Jones and David Petraeus -- who clearly recognize, and have publicly said, that the festering Israeli/Palestinian conflict, and the (obviously accurate) perception in the Muslim world that the U.S. enables Israel, is harmful in numerous ways to U.S. interests in the region.  Especially with largely anti-Israel Arab public opinion starting to supplant easily manipulated, U.S.-serving Arab tyrants, it is vital -- for what the U.S. government perceives to be its interests in the region -- that Israel reach a peace agreement, and that in turn requires that the U.S. use its leverage to pressure Israel to do things it plainly does not want to do.

What made this last week significant is that it underscores how politically difficult such an undertaking is for any American President: precisely because of the obsessive, relentless Israel Lobby that Walt and Mearsheimer invented in their conspiratorial, bigoted heads.  If even the tiniest step provokes the backlash that we saw this week, imagine the domestic political upheaval which a true effort would engender.  The New Yorker's Hendrick Hertzberg put it this way:

The President wants to make peace and presumably knows that it won't happen without a huge and politically brutal American effort. Such an effort would probably provoke the Israel lobby (a better name for which would be the Likud lobby) into an all-out fight against his reëlection.

Andrew Sullivan added:  "To achieve this, he has to face down the apocalyptic Christianist right, the entire FNC-RNC media machine, a sizable chunk of his party's financial base, and the US Congress."

It's far from clear that Obama's commitment to this outcome is genuine.  I've seen very little evidence that the President is willing to sacrifice his political self-interest in pursuit of a deeply held conviction, and ample evidence that he isn't.  But whatever else is true, even these minimal applications of presidential pressure open up the discussion about our Israel policy wider than it's ever been, trigger very rare criticisms of the Israeli government in U.S. political discourse (from the President's loyalists, angry at Netanyahu), and shine a much-needed light on the multiple ways that U.S. policy toward Israel is so harmful to the national interest (aside from being morally unjust).

Regardless of Obama's intentions here -- and that remains unclear -- a prerequisite to any meaningful change in U.S./Israel policy is the defeat of those who want to suppress the debate entirely.  Those are the people now wildly demonizing the President for his tepid Middle East speech, and it's why it is incumbent upon anyone who desires real change in this area to defend him from those attacks.  At the very least, the notion that defying the Israeli Government is some sort of supreme evil -- and, conversely, that loyalty to that government is a solemn duty -- needs to be demolished.

UPDATE:  Prime Minister Netanyahu is scheduled to address a joint session of Congress - having been invited by House Republicans -- and David Frum excitedly wonders this:

I think a better question is whether the ovation will be longer and more enthusiastic than those accorded American Presidents. It is ironic indeed that the same GOP members who will stand and cheer wildly for this foreign leader in conflict with their own country's President are typically the first to scream "unpatriotic!" accusations at others.