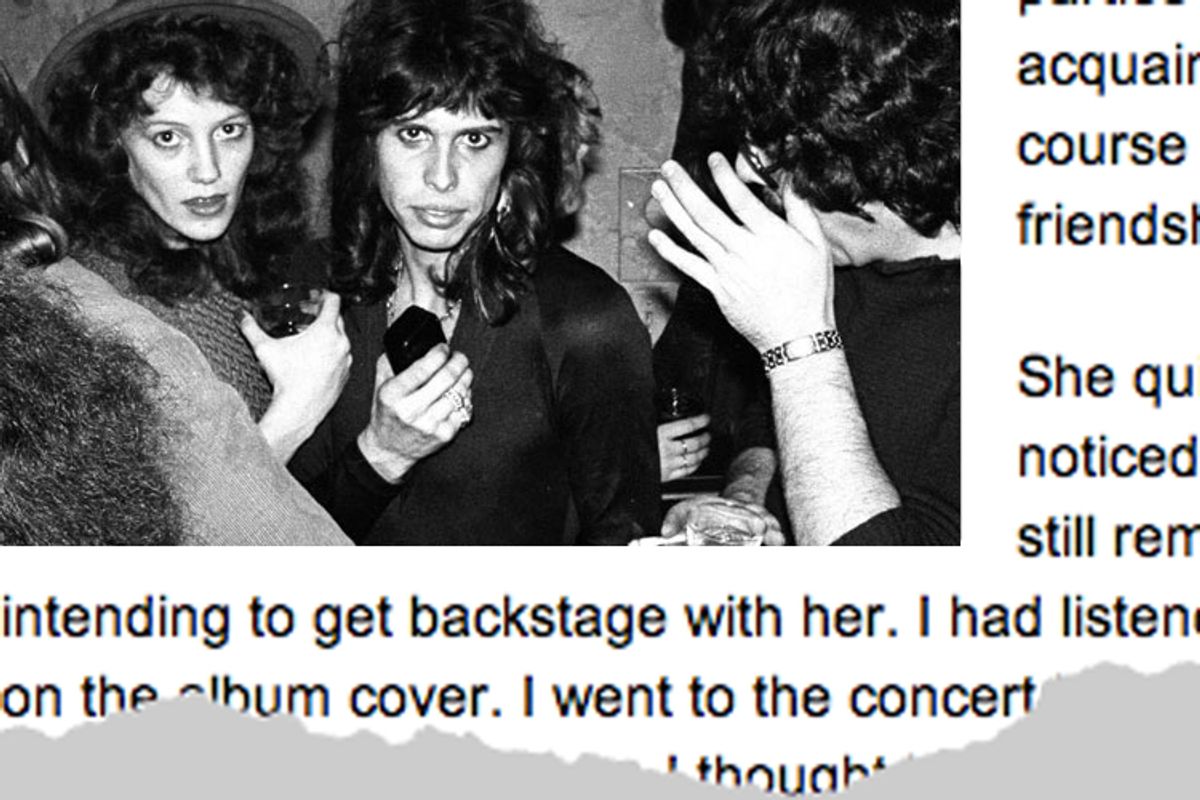 Earlier this month, the National Review ran a story on the "trauma" of abortion with an unlikely star at its center: Steven Tyler. In it, writer Kevin Burke, who runs a retreat for women "healing after abortion," tells the story of a young Aerosmith singer, his even younger teenage girlfriend, and the terminated pregnancy Tyler once admitted "devastated" him.

There was little in the story about the girl herself and her perspective on the events of the abortion she had back in the mid-'70s, a glaring oversight for a story involving a teenager whose parents had granted a rock singer guardianship of -- and clearly, sexual access to -- her. But now, Julia Holcomb is speaking out about the events leading up to her choice, and her very different, very un-rock 'n' roll life now. In a piece for LifeSiteNews introduced by Kevin Burke, Holcomb describes Burke's original story on Tyler as "remarkably compassionate" -- and explains that she now wishes to "bring closure and peace to this period of my life" by reliving her own memories of the time.

In a plainspoken confessional style, she describes a childhood that was tempestuous from the start, one with a wandering father and a mother she says had been encouraged to have an illegal abortion when she was carrying her. By the time she was a teen, she'd been in a devastating car accident that had killed her brother, her mother's second marriage was ending and a new one was beginning, and her sister had taken off with a boyfriend. Then she met the rock star. "My mother signed over guardianship of me to Steven after I had moved to Boston," she writes, noting that "he wanted guardianship papers so I could travel across state lines when he was on tour."

Throughout her 5,000-word narrative, Holcomb deviates in many places from the tale in Aerosmith's 2003 group "autobiography," "Walk This Way." For starters, she says she was nearly 16 when she met Tyler, not 14, as he'd recalled. She claims there were no other abortions, as he'd said in the book, and that "he has repeatedly humiliated me in print with distortions of our time together." And, significantly, she says he "asked me to have a baby with him and purposefully set out to get me pregnant" after throwing her birth control pills off a hotel balcony.

There was a marriage proposal -- and a withdrawal of it. There was a house fire, during which she says she suffered severe smoke inhalation. It was while she was recovering in the hospital, she says, that Tyler pressured her to have an abortion, citing concerns for her youth and the potential damage to her and the baby from the fire. When she initially refused, he told her she could go back to her family to have the baby.

Feeling alone and abandoned, she agreed to what she now recalls as a "a horrible nightmare I will never forget." Even now, 36 years later, she says, "I wish I could go back and be given that chance again, to say no to the abortion one last time. I wish with all my heart I could have watched that baby live his life and grow to be a man." She says Tyler was with her during the procedure, snorting cocaine, and that he told her the baby "had been born alive and allowed to die." The relationship didn't survive long after, either.

Eventually Holcomb returned home and found the church. Today, Holcomb is a mother of seven -- six children with her husband and  "a beautiful little girl whose young mother made the choice for life in a difficult pregnancy." She describes herself today as a "pro-life Roman Catholic" who prays "that our nation will change its laws so that the lives of innocent unborn babies are protected" and for "strengthening the sanctity of marriage."

Even if some of the details of her story conflict with other accounts, Holcomb's pain and shame are no doubt real. LifeSiteNews is certainly eager to get the word out about that pain; on Tuesday, it made sure to contact me at two of my email addresses and Twitter so I wouldn't miss it.

Holcomb's story shows that choice is not a tidy, one-size-fits- all matter – it can leave a woman and man with lingering guilt and what ifs. Or it can be, for others, simply a relief. The price of having a choice is accepting its consequences. Holcomb, through her religious conversion, the family she has raised, and her decision to speak up about the baby she didn't have, has done it her way.

But what religious conservatives can't seem to grasp is that the cautionary tale of one shouldn't be taken as an argument against changing laws that profoundly affect others. Reproductive choice isn't about forcing women to have abortions; it's about protecting those who do want them. It's also, for the record, about making sure pregnant women have decent prenatal care and safe childbirth options. Holcomb's story of being grateful that her mother didn't have an abortion, of being passed around from her family to a man who couldn't care for her, of the horror of surviving a fire and the adolescent pain of a pregnancy and abortion, makes sense for her. It doesn't, however, take into account that a different pregnant teenager, under different circumstances, would tell a different story. And that the United States is full of girls and women who would no more want to be bullied and pressured into a life-changing course of action than Holcomb did, all those years ago.