The mind-boggling awfulness of "The Hangover Part II" 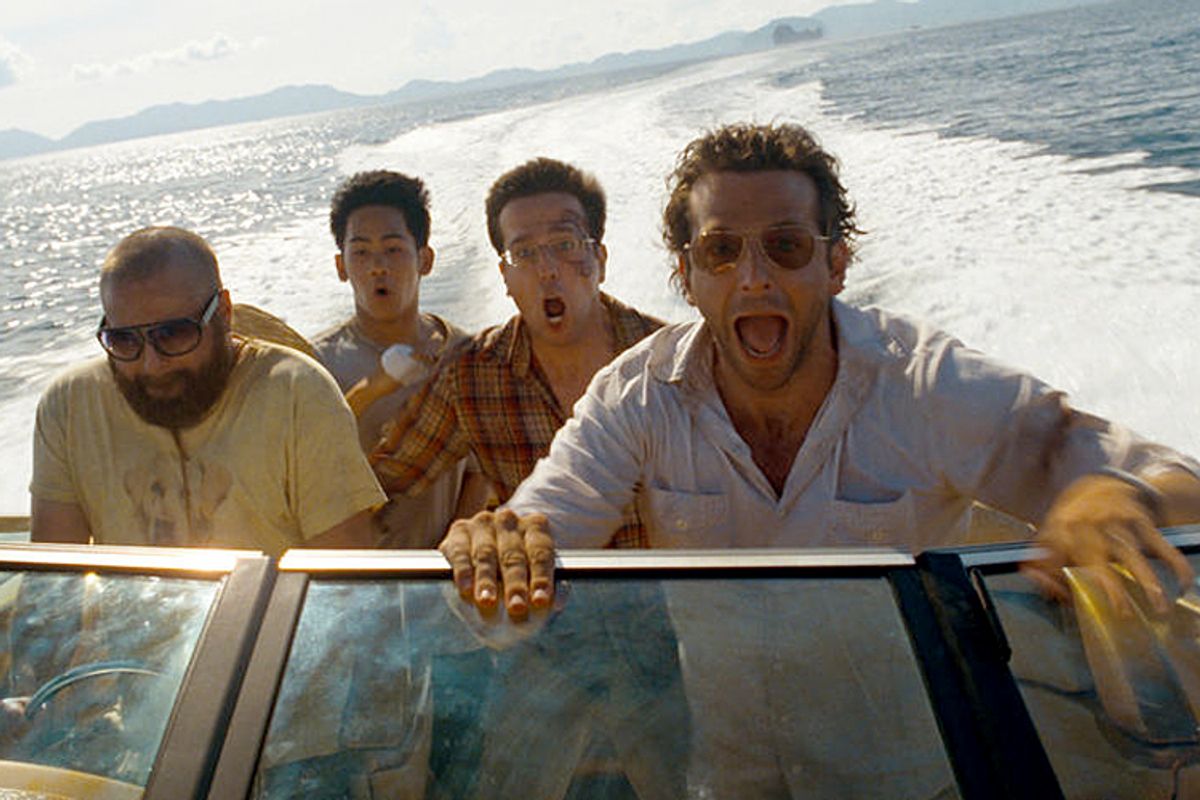 So Mike Tyson's tattoo artist tried to stop the worldwide distribution of "The Hangover Part II," based on the premise that the filmmakers had stolen his Maori-inspired design and stuck it on Ed Helms' face. I guess that wasn't much of a legal case, which is too bad, because as it turns out the guy was accidentally trying to perform a public service. Maybe he should have tried the argument that the movie sucks so bad that if anyone, anywhere, thinks he had anything to do with it that amounts to defamation of character.

Since we're talking about meta-narratives that are way more interesting than this bad and stupid movie, I guess we were supposed to think that director Todd Phillips and stars Bradley Cooper, Zach Galifianakis and Helms were being principled, woman-friendly men by kicking Mel Gibson out of "The Hangover Part II." That's nice and all, but at least Gibson, when he's being funny, is pretty damn funny. Speaking strictly from the perspective of someone who sat on my ass through this entire terrible movie, I'd gladly trade in the whole thing for five decent minutes of Mel.

Can I keep vamping for a while, and stave off the movie review? In France this would-be huge hit is known as "Very Bad Trip 2." (Those words, in English.) In Spanish-speaking countries, it's called "¿Que Paso Ayer? 2." In German, it's ... oh, all right. In English, it really should be called "Sex and the City 2: This Time It's for Guys." If you seriously need any more evidence that the raunchy bromance comedy genre has become a played-out shell of its former self, huffing the fumes of last night's stale beer (mixed with other unidentifiable fluids) in a back alley at dawn, the great burst of sour flatulence that is this overcooked sequel should provide it. Even as transparent attempts to recapture the so-called magic of a big hit go, this new voyage into manufactured outrageousness is especially shameless. Phillips and his co-writers, Craig Mazin and Scot Armstrong, seem to have launched into this project with a misguided faith in their own brilliance, but nothing resembling an idea or a story.

"Hangover II" simply recycles the bachelor-party-gone-awry gags from the 2009 summer hit, in a new and supposedly grittier context where the cast seems ill at ease, with much less comic effect and a lot more homophobia and xenophobia. It's a dumb, ugly and, most of all, painfully unfunny movie, which can't quite decide between competing touristic impulses: Bangkok as a pervy, nasty sex-trade destination and the mysterious East as the home of a superior, contemplative spirituality. It's like "Eat, Pray, Love," only with hot ladyboys to turn you gay and a cigarette-smoking monkey to steal your heart.

Do you really want me to provide some whimsical effort at plot synopsis, when you and I could both be using these few seconds for something else: reading about a maid-molesting French socialist or mocking the idiotic behavior of 2012 Republican presidential "candidates" or staring out our office windows in a melancholy stupor? OK, fine, but I don't want any complaints about how boring it sounds. So the "wolf pack" from the first movie reconvenes at a luxury resort in Thailand, where doofus dentist Stu (Helms) is supposed to marry a hot Asian chick named Lauren (Jamie Chung) whose dad hates him. (I went south on this movie as soon I realized that Stu had ditched the charming Vegas hooker he married in "The Hangover.") Cooper plays the douchey, studly Phil, who acts like a jerk all the time, and Galifianakis of course is the socially inept, passive-aggressive Alan, invited along for unclear reasons, since nobody likes him at all.

There's no big bachelor party or anything, just a late-night Budweiser around the campfire. But next thing these losers know they're waking up a day or so later in a sleazy hotel room in Bangkok, accompanied by the aforementioned chain-smoking monkey in his Rolling Stones denim vest, a severed finger that seems to belong to Lauren's med-student kid brother (Mason Lee), and the sleeping nude personage of Mr. Chow (Ken Jeong), the effeminate but kick-ass gangster from the first "Hangover." Actually, I was very, very glad to see Chow, because as much of a flaming stereotype as his character is, Jeong inhabits him with a ferocity that makes him by far the funniest and most real-seeming person in the movie.

Does that sound exactly like the first "Hangover," except with the wildlife made cuter and an exotic setting that's only going to produce dumb-ass cultural clichés, and no Mike Tyson? That's all correct except that Tyson shows up at the end to perform a rap version of "One Night in Bangkok," and you'll really wish he hadn't. Once again our heroes' missing hours are not entirely explained, but this time that decision feels sloppy and slapdash in a way it didn't quite in "The Hangover." Oh, there's a drug deal gone wrong and a low-grade American mobster played by Paul Giamatti and a Buddhist monk in a wheelchair. There's a fair amount of naked male peener, and of course there's the frat-boy-centric audience's greatest fear and/or desire: anal penetration. (I've seen at least four movies in the last year that resort to this as the ultimate squirm gag: The hero might take it from behind and like it!)

Now, in fairness I should add that I didn't think the first "Hangover" was all that great either, but it had several good laughs and a profane, open-hearted American cheerfulness about it that was hard to resist. "The Hangover Part II" trades that in for a B-grade thriller atmosphere that isn't quite convincing but manages to make all three of the central so-called buddies seem like creeps who don't actually like each other and can't relate to the world. Cooper and Galifianakis, in particular, are talented-ish actors who are stuck in really bad grooves and on the verge of typecasting themselves into oblivion, the former as a male-model jerkass irresistible to certain women (i.e., the shallow ones) and the latter as a pitiable misfit who's supposed to make us laugh uproariously at his Asperger-like behavioral problems and 1988 leisure-wear wardrobe.

I suspect there was half an impulse here -- or 20 percent of an impulse -- to take the "Hangover" characters and put them in a genuinely dark and dangerous situation. That might or might not have been interesting; it isn't that great of an idea, frankly, but it's something. Then the commercial necessity of giving a huge international audience a C-minus imitation of what they've already seen took over, and we got this shockingly inept retread instead. With "Hangover Part II," the worldwide downturn in dude comedy hits its nadir. Time to chillax and recharge, bros; check out the success of "Bridesmaids"; let the ladies have a little oxygen. We can only hope.