Is the signature dish outdated? 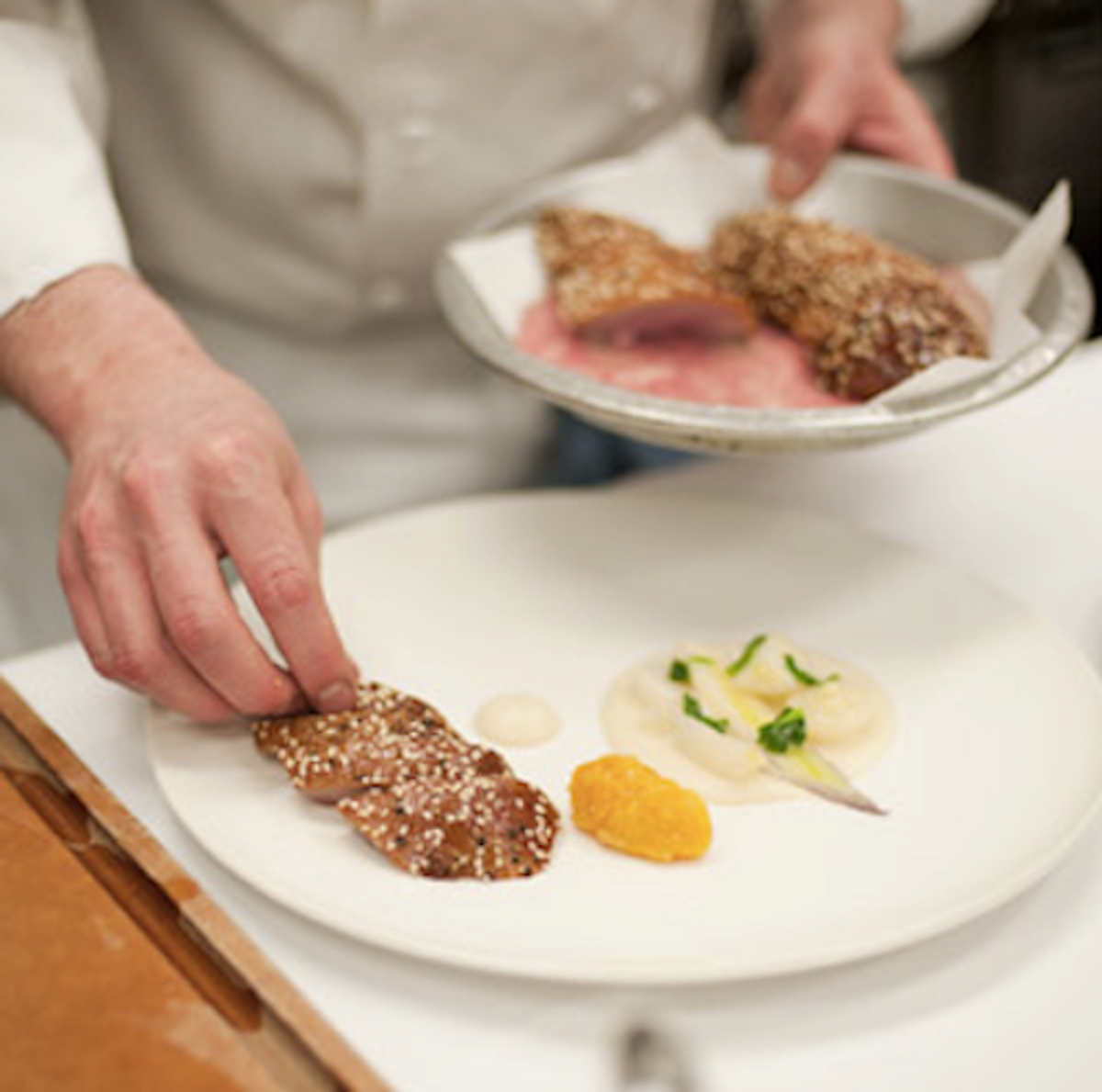 On the subject of duck, I confess that I am a chauvinist. There is the one, true way to prepare it -- roasted, Chinatown style -- and there is everything else. But the young chef Jason Franey's version at the Seattle landmark Canlis is making me reconsider my prejudices. Brown as bourbon, the skin is like a crust, bowing over the breast, hugging it jealously. It crackles somewhere between crisp and crunch, a little like puffed rice, before dissolving into honey sweetness and black pepper heat. The meat has that deep, bass-note richness you want from duck, but is thick with flavors I can't place: complex, swirling, delirious-making.

It was early spring and it was a dish very much of the moment, the bird served with wilted ramps, spring onions, pearl onions and a sauce of cream infused with onions. A few baby spring turnips. All things with bite, mellowed by youth and cooking. As I ate, I thought, "What makes duck more delicious than onions?" And also this: "In a few weeks, when spring is gone, this dish won't be here anymore."

Franey's cooking is elegant, muscular and ephemeral. He refers to "microseasons," like the part of the onion season when the onion is most delicate. As a result, his cuisine is ever-changing; it's a cuisine of creativity and spontaneity; it's a cuisine of what's new. It's about a sensibility and a philosophy more than it is a collection of established "signature" dishes. Of course, Franey's not alone in this -- it's the prevailing ethos of most ambitious young American chefs. Which is why it seems a little strange that the wildly talented Franey's first executive chef job is at Canlis -- 60 years and counting of marriage proposals, anniversaries, and meeting the in-laws. It's a vibrant restaurant, not a museum, but it's still known for the signature dishes it started out with, dishes that include a twice-baked potato.

Here's a snapshot of what American fine dining was like back in 1964. On the cover of "Famous Foods From Famous Places: Specialty-of-the-House Recipes From America's Leading Restaurants," there is a bowtied waiter wearing a bright red sportcoat, drowning bananas in orange glop. The big, wilty magnolia blossom on the table is passing out from the heat of the chafing dish, looking like a sea monster dying to crawl back to the water. Bon appétit!

Inside, there is a section on Canlis, then 14 years old. Restaurant years being similar to dogs', Canlis was already an elder statesman, and the book describes its speciality-of-the-house dishes: broiled steaks, steak tartar, prawns sautéed with vermouth, and, daringly, a Canlis Salad that, "with no apologies to Caesar, contains mixed greens tossed with croutons, minced bacon and grated cheese," prepared by "pretty Japanese girls wearing bright colored kimonos."

The meaning, the very point of a signature dish is that it doesn't change. Rarely do chefs themselves set out to create one; it's a designation conferred by the public, and yet, once you accept it, it becomes a pact with your diners: If you come here, you can have this thing. It's both an honor and a bind. So how do you deal with that if your entire culinary philosophy is based on change?

Through most of its history, Canlis was considered a steakhouse. And while the '90s redesign of the stunning mid-century modern building left a gorgeous, sleek, muted space, there is no missing its history: A massive, copper-plated grill station juts into the dining room like the prow of a mighty ship, where the Chef-cum-Captain, be-toqued and grand, would stand at the helm, meat sizzling before him.

"Back in the day," Franey said, pointing to the grill, "the chef would call into the kitchen on a microphone for his plates. They might have all had the same vegetable, the same potato, the same garnish. He'd just put the steak on and send it out from the grill." Fifteen years ago, Canlis made the shift to being a modern restaurant under chef Greg Atkinson, focused on seasonal Northwest cuisine, but the first thing Franey did was change the structure of the kitchen. Literally. He personally sawed down all the racks in the middle of the line so he could have his own station in there, cooking with his crew.

And this is what I mean by cooking: curing venison in pine ash. Slicing opakapaka into sashimi, serving it with fennel pollen. Spherifying a Tequila Sunrise. And also searing steak teriyaki, sautéeing prawns in vermouth, and plating massive Canlis Salads that dwarf almost anything else coming out of the kitchen.

The classics are delicious, to be sure, but isn't their unyielding presence frustrating for a chef so inspired by newness?

"I'm not driven by my ego," Franey said. "I work for this family, and those legacies are part of this family. Mr. Canlis said to me, 'My name is on the door, but this place is bigger than me. It's bigger than all of us.' I'm here to cook for the guests. If you've been coming here for 30 years, and you're thinking, 'Don't mess up my steak teriyaki!' I need to earn your trust."

It was a lovely answer, but, frankly just a little too diplomatic. Pressed, he eventually admitted that it would probably be easier to start a menu from scratch. But then he smiled and added, "But what's the fun in that?" Learning to make really killer Peter Canlis Prawns was, too, a form of change.

We got back to talking about the duck. Even just remembering it made me a little wobbly. "What did you ... do to that thing?" I could only manage to ask.

In his modest way, he said, "Well, we roast it at 450 degrees for 16 minutes." Then he added, "We rub it in honey first." I asked about brines or injected marinades or sorcery -- what gives it that crazy, amazing flavor? "Oh," he said casually, "and we dry age it for 14 to 24 days first."

The aging, for which he works exclusively with specialty butcher Tracy Smaciarz, gives the duck a wild flavor, flavor you can't make in a lab or a kitchen, flavor that is the handiwork alone of enzymes and bacteria and time. Coming out of the oven, it's a powerful scent: the unparalleled aroma of browned bird skin, the sweetness of toasted honey, the floral perfume of the herbs stuffed into its cavity. But the thing, the thing that you can't miss, is the funk. The funk the bird casts off like a lure, a smell like the edge of a prosciutto. If you get close enough to be impolite, it's a bit like the part of the cheese counter where only eagles dare to fly. Woven into the taste of the meat, the funk is subtle, a backdrop of complex, floating, lingering flavors you can't really place. It tastes deeper than duck you've had before, darker, weirder, and yet also somehow lighter. Less bloody and mineral, sweeter, a cheese-rind-tang rising through the fatty succulence. It tastes like genius.

"How did you think of that?" I asked.

"Well, I learned it from Daniel Humm," he said, matter-of-factly, referring to the chef he worked for at Eleven Madison Park in New York. "And he learned it from his mentor, Gerard Rabaey." And he probably learned it from his, and so on. It turns out that the tradition of hanging game birds to age is, well, very, very old. Medieval. Franey smiled. "Daniel said to me once, 'We don't really make anything new. We just do it well.'"

After I left the restaurant, I tweeted about my incredible meal at Canlis. The tweets came flooding back: "Did you have the duck?" "The duck!" and "Please say you had the duck!" I laughed. Looks like Franey has a signature dish on his hands.