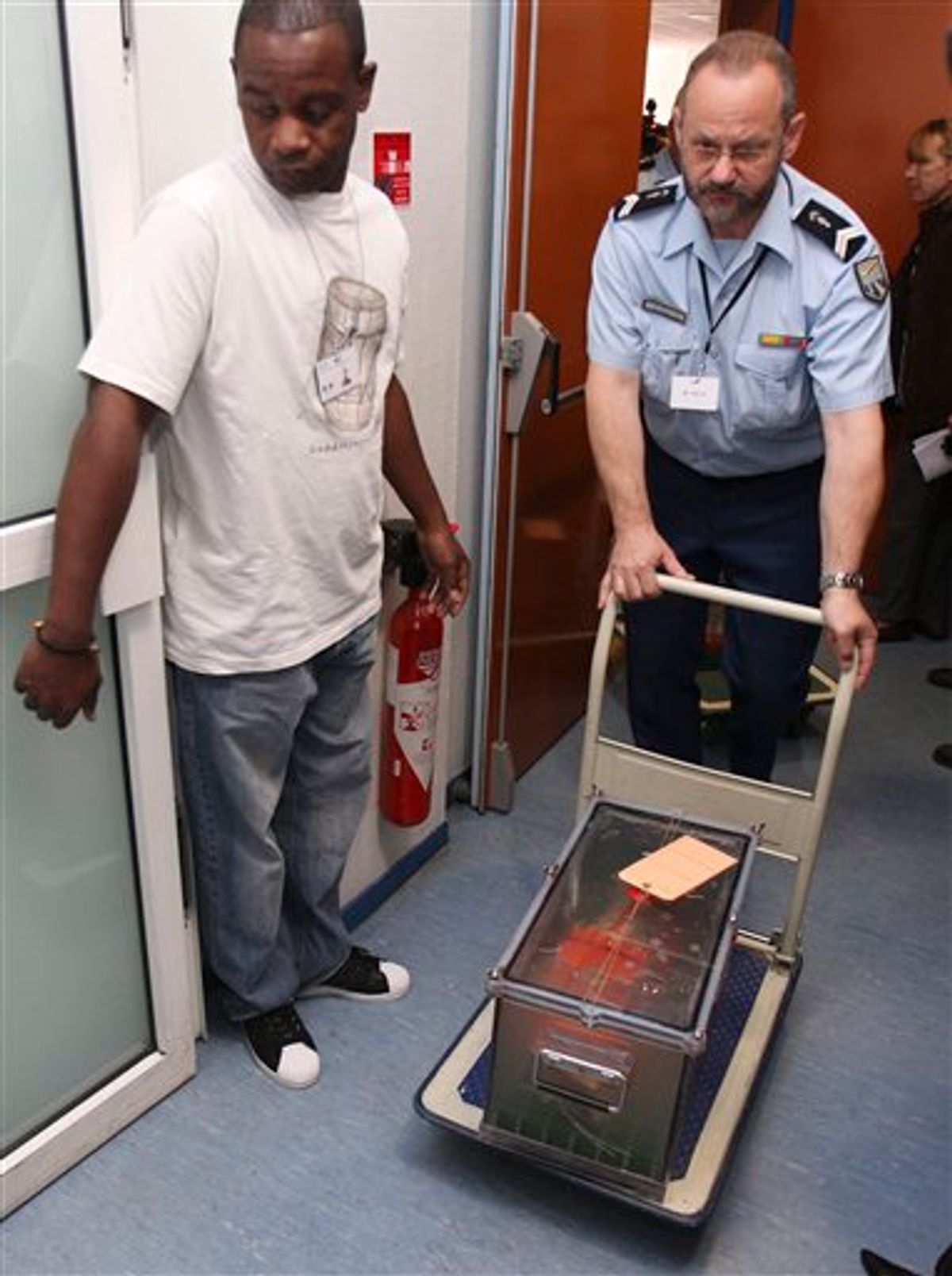 FILE- This Thursday, May 12, 2011 file photo shows a police officer pushing one of the two flight recorders of the Air France flight 447, who crashed in 2009, after they were displayed to reporters during a press conference at the French investigators' headquarters in Le Bourget, near Paris. Officials say flight recorders from an Air France plane that crashed nearly two years ago show that the captain only arrived in the cockpit after the plane had begun its fateful 3 1/2-minute descent. The initial findings of the French air accident investigation agency, the BEA, based on a reading of the so-called black boxes recovered from the ocean depths, found that the captain had been resting when the emergency began.All 228 aboard the Rio de Janeiro to Paris flight were killed on June 1, 2009. (AP Photo/Michel Euler, File) (AP)
--

Black box recordings from the plane reveal the final minutes of the doomed plane, as two co-pilots struggled to regain control over the plane as it swayed from side to side and fell at almost 11,000 feet (3,350 meters) per minute.

Everyone aboard Air France Flight 447 from Rio de Janeiro to Paris were killed on June 1, 2009.

The initial findings also showed the captain was out of the cockpit for a routine rest period and arrived more than a minute after the emergency began.

The plane was passing through bad weather in the mid-Atlantic when the problems began.

More than eight minutes before the crash, the co-pilot at the controls, one of three members of the flight crew, advised the cabin crew "you should watch out" for turbulence ahead. He said the plane could not climb out of the cloud layer where the turbulence was happening because it was not cold enough.

Soon after, the plane's autopilot and auto-thrust shut off, the stall alarm sounded twice and the co-pilot at the controls, 32-year-old Pierre-Cedric Bonin, took over manual control

The two co-pilots wrestled with the controls for about 3 1/2 minutes in a bid to stop the Airbus A330 from spiraling into the sea, the report said.

It report did not analyze the data or cockpit conversations or assign blame. The report also did not suggest whether the Pitot tubes, the plane's speed sensors -- which investigators have said likely played a role -- were the main culprits, or whether the temporary absence of Capt. Marc Dubois from the cockpit had any impact on the quickly unfolding events.

So far, the search teams have not found the plane's Pitot tubes. Co-pilot Pierre-Cedric Bonin, then 32, was at the controls as the plane went down, sitting to the right of a second co-pilot, David Robert, 37. Pilots on long-haul flights often take turns at the controls to remain alert. Dubois returned to the cockpit, but did not take back the controls.

The flight recorders were found along with bodies in the latest search of the ocean depths last month. A full report on the crash is not due until next year

Jill Lawless contributed to this report.

(This version corrects that plane stalled once)