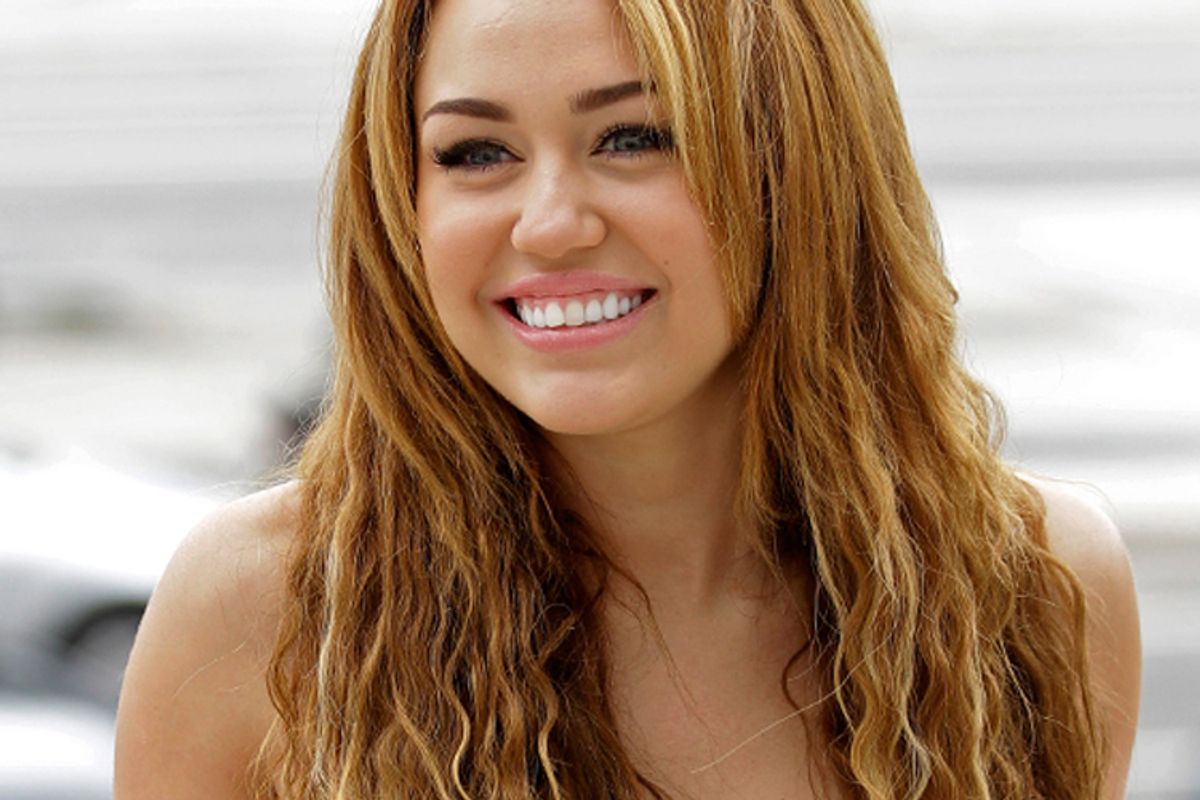 Happy first day of Pride Month – here's your pop quiz. Which of these three are openly supportive of gay rights, and which is a Rick Santorum supporter?

The correct answer is: a and b get their pride on, while c decidedly does not. Pride party in the USA!

Cyrus may not be the outspoken "Born This Way" icon that Gaga is, but the kid gets props for shutting down -- and openly expressing her disdain for -- intolerance this week. When a fellow Tennessean and self-professed Christian fan named Tammy Hudson took to Twitter to lament "what happened To that Christian girl from Tn with decent moral values and a lot of heart?" Cyrus promptly singled the woman out from among her over 1 million followers to call shenanigans. "What an ignorant statement," she wrote. "I dont have 'alot of heart' cuz im not gonna be a closed minded hypocrite? LOVE IS LOVE. GOD IS LOVE." It's a statement so forthright and so sadly lacking in Christian conservatism, we're willing to forgive Cyrus her "alot" and "cuz." (Hudson, meanwhile, was unmoved, elaborating later that "I didn't decide it was wrong to be gay. God did, I just follow his rules.")

But Cyrus had more to say. Taking aim at hipster douchebag retailer Urban Outfitters, which made headlines recently for yet another in their long line of controversies over allegedly ripping off designs, Cyrus tweeted, "Love that everybody is hating on Urban Outfitters…. Not only do they steal from artists but every time you give them money you help finance a campaign against gay equality. #SHADYASHELL" and "'IF WE ALLOW GAY MARRIAGE NEXT THING U KNOW PEOPLE WILL BE MARRYING GOLD FISH' - Rick Santorum UO contributed $13,000 to this mans campaign." [sic]

Cyrus, bless her teenage heart, is correct about Urban Outfitters. The Philadelphia-based company's founder Richard Hayne has contributed a fortune to the hyperbolicSantorum's political action committee over the years. And three years ago, the company did a hasty 180, pulling an "I Support Same Sex Marriage" shirt off its shelves after just one week because it was causing "too much bad press."

If she's looking for an inexpensive T-shirt chain that's more politically evolved this summer, Cyrus may prefer to throw her love behind Old Navy. This week the retailer debuted a line of four pride-themed shirts, with 10 percent of the proceeds from sales going to the brilliant "It Gets Better" project. The shirts, unfortunately, are only available in a mere 26 of Old Navy's more than 1,000 stores, and not for sale online, suggesting a very timid first foray into the equal rights biz. But in a world where kids can still be suspended from school for wearing a shirt that expresses support for something as controversial as love and equality, and celebrities can be chastised for their "moral values" of tolerance, it's encouraging to see such mainstream, middle-of-the-road American icons as Old Navy and Miley Cyrus speaking out. It offers the hope that, one T-shirt, one tweet at time, it really is getting better.