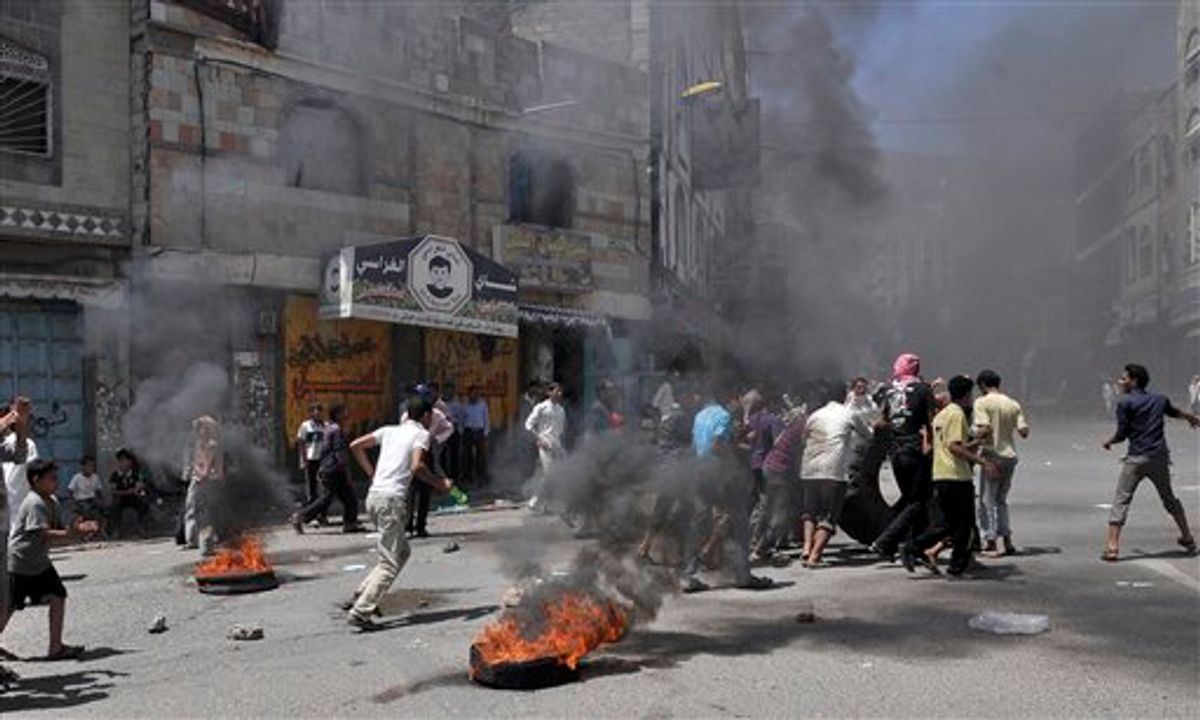 Anti-government protestors prepare to burn a tyre as they block the road during clashes with Yemeni security forces in Taiz, Yemen, Tuesday, May 31, 2011. Heavy fighting resumed Tuesday in Yemen's capital between government troops and followers of the country's most powerful tribal leader, ending a brief cease-fire and again raising the prospect that Yemen's political crisis could veer into civil war.(AP Photo/Yemen Lens) (AP)
--

Government forces and tribal fighters exchanged gun and artillery fire in Yemen's capital early Wednesday, sending the crackle of gunfire and resounding booms over the city in fresh fighting that killed at least 41 people. The fighting spread to new areas, with tribesmen from the powerful Hasid confederation seizing buildings in neighborhoods in the city's south and northwest.

Fighting in Sanaa raged until 5 a.m., and witnesses said units of the elite Presidential Guard, commanded by one of Saleh's sons, shelled the headquarters of an army brigade responsible for guarding sensitive government institutions. Army officers who have defected to the opposition said the government suspected the brigade commander was about to join forces with the movement to oust Saleh.

Opposition army officers, speaking on condition of anonymity in line with army rules, said the armored brigade commander, Brigadier-General Mohammed Khalil, was neutral and without political affiliation but had apparently angered Saleh.

A resident who lives close to the fighting and would only give his first name, Zaher, said columns of smoke and fire billowed from Khalil's brigade headquarters and explosions could be heard.

The 41 dead included combatants from both sides of the conflict, said the medical officials, who spoke on condition of anonymity for fear of reprisals.

The fighting has engulfed the northern Hassaba neighborhood, where tribal fighters have seized a number of government ministries and buildings. Government artillery fire has heavily damaged the house of al-Ahmar, the tribal leader, and the government has cut the area's electricity and water supplies.

The units, led by one of Saleh's sons, and special forces wearing uniforms of government security troops attacked but failed to recapture the Hassaba administrative building from tribal gunmen.

Fighting spread to other areas of the city Wednesday, with al-Ahmar fighters seizing the office of the General Prosecutor in the city's northwest. They were accompanied by two armored vehicles from the 1st Armored Division, whose powerful commander abandoned the president two months ago. So far, however, his troops have not participated in battles against Saleh's security forces.

The Interior Ministry said in a statement that tribesmen had also taken over a five-story building in the Hadda neighborhood in the city's south after clashing with the army. The area is a stronghold of Saleh supporters.

Yemen's official news agency SABA called the tribal fighters "armed gangs," saying that they looted supplies, furniture, documents and other things from the buildings they seized.