The war in Libya growing more illegal by the day 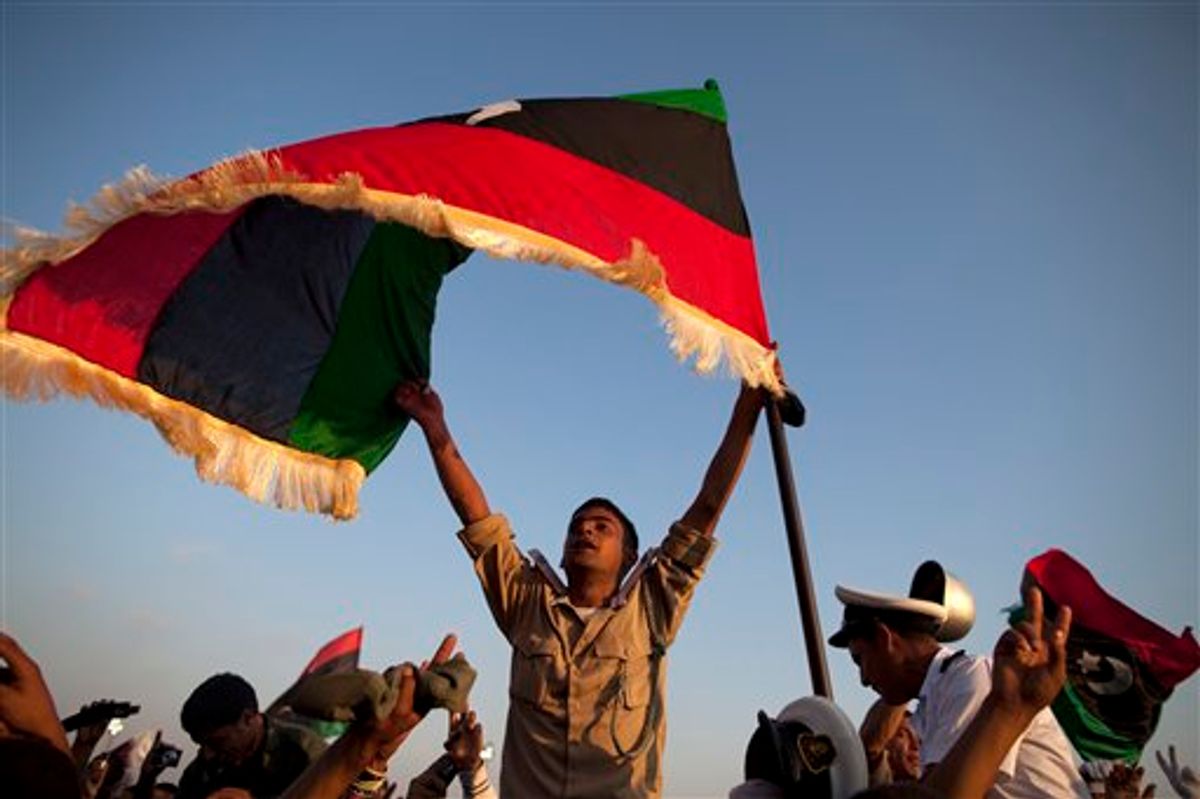 A new cadet for the Libyan rebel army holds a pre Moammar Gadhafi flag after a graduation ceremony for new cadets in Benghazi, Libya, Sunday, May 29, 2011. (AP Photo/Rodrigo Abd) (AP)
--

To the extent that the War Powers Resolution (WPR) authorized President Obama to fight a war in Libya for 60 days without Congressional approval -- and, for reasons I described here, it did not -- that 60-day period expired 12 days ago.  Since that date, the war has been unquestionably illegal even under the original justifications of Obama defenders, though I realize that objecting to "illegal wars" -- or wars generally -- is so very 2005.  After making clear that they intended to contrive "some plausible theory" to justify this illegal war, the White House finally settled on the claim that the war in Libya -- despite featuring substantial U.S. military action with the goal of destroying a foreign army and removing that nation's leader -- is too small and limited to be a real "war" under the Constitution and the WPR.

Even the White House seemed to recognize the absurdity of that excuse -- the WRP explicitly applies "in any case in which United States Armed Forces are introduced (1) into hostilities" -- and the President thus subsequently requested a Resolution from Congress approving the war.  That authorization, however, never came, and now it seems that Congress is closer to doing the opposite: approving a bipartisan bill opposing the war:

On Wednesday, 74 days after U.S. forces joined the military operation in Libya, President Obama seemed to run out of goodwill on Capitol Hill.

A group of both liberals and conservatives -- defying the leaders of both parties --- threw their support behind a bill to pull the U.S. military out of the Libya operation. That prospect led GOP leaders to shelve the bill before it came to a vote. . . .

On Wednesday, the bill at issue was far more drastic. Introduced by Rep. Dennis J. Kucinich (D-Ohio), it would demand that Obama withdraw forces from the Libyan operation within 15 days. That would be a crippling loss for the NATO-led campaign, which relies heavily on U.S. air power.

The resolution looked, a week before, like a legislative long shot.

Then, on Wednesday, it wasn’t.

"There’s been disquiet for a long time," said Rep. Jeff Flake (R-Ariz.), one of those who supported it. "Republicans have been too eager to support some military ventures abroad. And this, I think, is perhaps a little more consistent with traditional conservatism."

Conservatives expressed support for the bill in a closed meeting, but GOP leaders put off the vote.

Waging a war for 74 days without Congressional approval is illegal enough.  Doing so when there is a growing bipartisan movement in Congress to compel an end to the war -- rather than approve it -- is even worse.  And note the individuals on whom Obama is now relying to protect him from this bipartisan effort to put an end to his illegal war:  "GOP House leaders" -- John Boehner and Eric Cantor, who refused to allow the bill to come up for a vote despite ample support among conservative members of their caucus as well as numerous liberal House members.  Can we hear more now about how the two parties are so radically different that bipartisan cooperation is impossible?  The Emperor has decreed that we will fight this war, and thus we will -- that seems to be the prevailing mindset.

Last week, I delivered the keynote address to the ACLU in Massachusetts for their annual Bill of Rights dinner. The topic was the Bipartisan National Security State and President Obama's continuation of it, and it obviously relates to the Libya issue. Those interested in listening to the 25-minute speech can do so here.