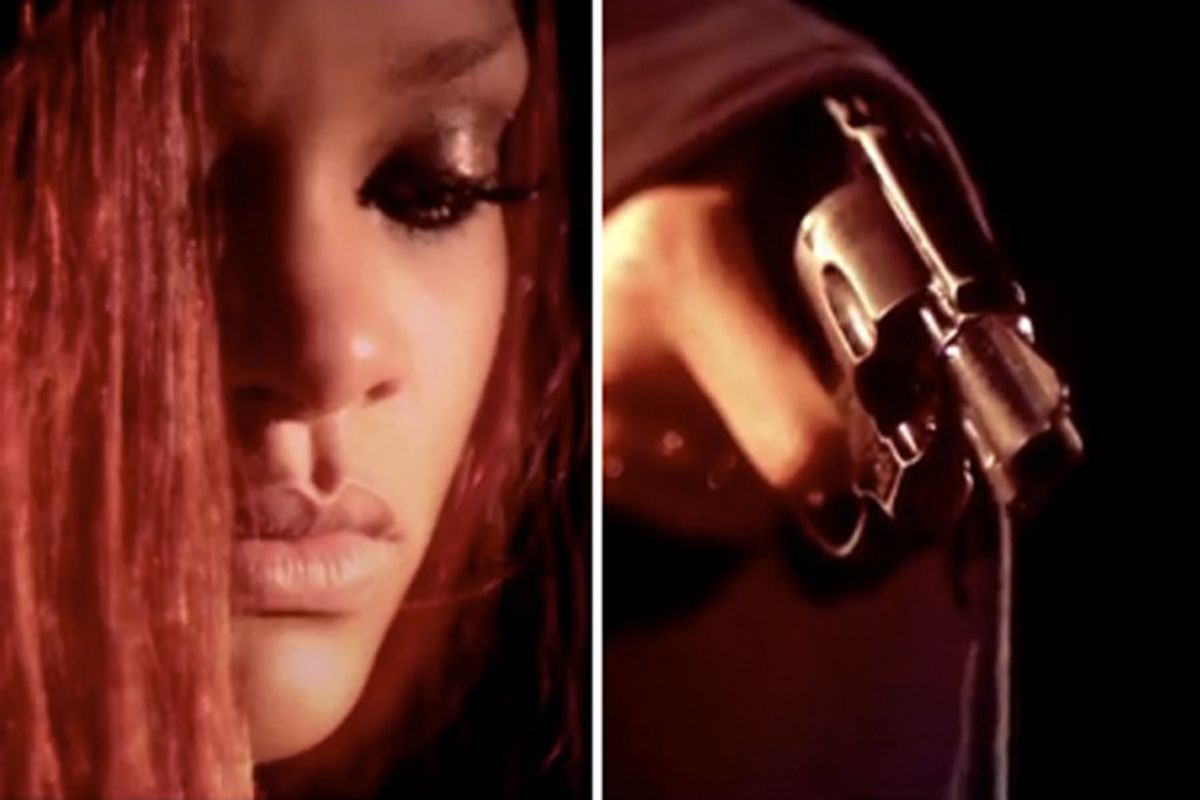 What will Rihanna do to top herself after this one? After exploring domestic violence in the video for "Love the Way You Lie"  and kink in "S&M,"  the perpetually button-pushing singer finally went and killed a man. What's that sound? Oh, it must be the inevitable outrage.

The video, "Man Down," premiered on BET Tuesday night. It clearly takes inspiration from Gaspar Noe's unnerving "Irreversible," and begins with an act of violence. In an arresting, music-free prologue, Rihanna coolly waits in a bustling Kingston train station, raises her gun, and fires a fatal shot to the head of a man in the crowd. What unfolds next is the story of how she got there: carefree scenes of "yesterday morning," a nightclub flirtation that leads to an apparent sexual assault, and an eventual staggering act of retribution.

The Parents Television Council was unsurprisingly swift to condemn the video, with its "implied rape scene with a man whom she later guns down in an act of premeditated murder." And co-founder of Industry Ears and a former BET music programmer Paul Porter lambasted the video, calling it "an inexcusable, shock-only, shoot-and-kill theme song." He continued, "In my 30 years of viewing BET, I have never witnessed such a cold, calculated execution of murder in primetime. Viacom’s standards and practices department has reached another new low…. If Chris Brown shot a woman in his new video and BET premiered it, the world would stop. Rihanna should not get a pass and BET should know better. The video is far from broadcast-worthy." BET has, in the recent past, deemed other controversial videos unsuitable for airing, including Kanye West's creepy horror opus "Monster." So why does Rihanna get a pass?

"Man Down" isn't necessarily the sort of thing you'd want your first grader rocking out to. It's not, for that matter, a brilliant song. But it's entirely possible for content to be intended for mature audiences without it being "inexcusable." Creatively expressing the theme of violence is not the same as promoting it. Music isn't always about dancing till the break of day; if it were, we'd have no "Stan," no "Rape Me." And if you think those songs condone killing your girlfriend or begging for sexual assault, think a little harder. "Man Down" doesn't, like the Dixie Chicks's "Goodbye Earl," take a celebratory view of icing an abuser. Nor does it even depict a warped crime of passion, like Guns n' Roses's classic "I Used to Love Her" or Eminem's notorious "Kim." Instead, it's far more in the tradition of "I Shot the Sheriff," "Bohemian Rhapsody," "Janie Got a Gun" or "Thin Line Between Love and Hate" -- songs that explore the strange horror of one's own capacity for violence when pushed to the limit. Rihanna sings with both deep remorse and a self-preserving fear of punishment, "I know it wasn't right ... Coulda been somebody's son, and I took his heart when I pulled out that gun."

Rihanna, one of the most famous domestic abuse victims in the world, has not gone quietly into survivorship. In the two and a half year since her assault by then-boyfriend Chris Brown, she has gone from pop kewpie to someone who is, at times, downright shocking in her depictions of sex and violence in her music and videos. She knows full well that the world views her through the prism of her past, and she knows how to work it. What unsettles her critics seems to be her refusal to play the fragile, broken butterfly. She doesn't sing about making it through the rain. Instead, she climbs on a tank.

Melissa Henson, director of communications and public education for the Parents Television Council, said this week that "Rihanna's personal story and status as a celebrity superstar provided a golden opportunity for the singer to send an important message to female victims of rape and domestic violence. Instead of telling victims they should seek help, Rihanna released a music video that gives retaliation in the form of premeditated murder." True, but seriously, does anybody think she looks happy about it? That she makes it seem like a good idea?

Rihanna, meanwhile, has her own views on the video. She wrote on Twitter, "Young girls/women all over the world ... we are a lot of things! We're strong innocent fun flirtatious vulnerable, and sometimes our innocence can cause us to be naïve! We always think it could NEVER be us, but in reality, it can happen to ANY of us! So ladies be careful and #listentoyomama! I love you and I care!" That's not a message to would-be abusers. That's a tale of caution to girls, and a warning to them about the consequences of revenge. Love it or hate it, "Man Down" isn't a "shoot and kill theme song." Look again. It's a five-minute tragedy.