Pick of the week: Life lessons from a 75-year-old gay dad

Pick of the week: "Beginners" is one of the best films about homosexuality ever made by a straight person 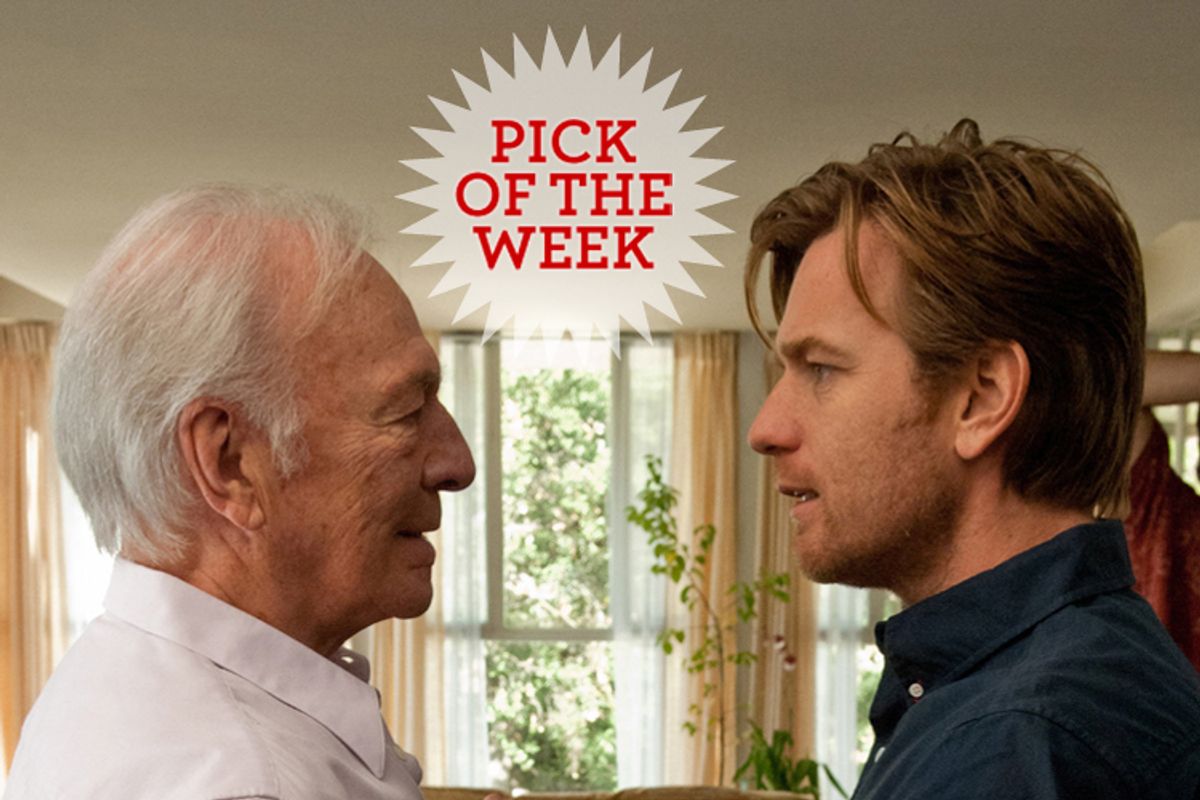 I totally lost my heart to Mike Mills' "Beginners," and I don't think I want it back. A multi-talented, multimedia dude whose work includes graphic design, music videos, documentaries and now feature films (his first was "Thumbsucker" in 2005), Mills is the kind of person who would be completely irritating if he weren't both so sincere and so authentic, a nearly impossible combination in our calculating age. You might say that the same description applies to "Beginners," which is a sad, sweet, funny and ultimately unforgettable love story about a man and a woman and a father and son, and also ranks among the most affectionate and sensitive portraits of homosexuality ever crafted by a straight person.

If I tell you that "Beginners" is rooted in Mills' own story, and that after Mills' mother died a decade or so ago his father came out to him, found a much younger lover, and spent a few years as a Pride-flag-flying, book-club-joining, socially active Los Angeles gay senior before his own death, that leads you toward one understanding of what kind of movie it is. Christopher Plummer plays the dad, Hal, in a generous and heartbreaking performance that I hope will not be forgotten come Oscar time, and Ewan McGregor plays the autobiographical protagonist, a depressed and lonely graphic designer named Oliver. I have no idea how the public perceives McGregor at this point, and he's certainly not the red-hot leading man he once was. But I can't be alone in thinking he's getting better and better all the time. He seeks out understated roles in mid-size quality films ("I Love You Phillip Morris," "The Ghost Writer," now this), and he has that mysterious Dean-Brando-Pacino ability to take a moment when nothing is officially happening and make it urgent and powerful.

But that description also might make it sound as if "Beginners" were a sweet, slight personal story, with a possibly tedious political agenda, and doesn't convey anything about how subtle and beautifully crafted it is. Drawing on his experience as a designer and his knowledge of film history, Mills has created a complex work of collage and montage, with a mixed-up chronology that breathes naturally and never feels arty or artificial. Indeed, while "Beginners" isn't one-fifth as showy or as labored as Terrence Malick's "Tree of Life" -- the standard of comparison for all self-reflective family films at the moment -- it actually considers many of the same questions about mortality and loss and memory and parenthood, and employs a similar narrative strategy (minus the dinosaurs and the direct address to supernatural entities). Mills' direction and Kaspar Tuxen's natural-light camerawork feel lo-fi and naturalistic, but from its first moments "Beginners" is an ingenious construction that tells several stories at once.

We begin in 2003, the film's present tense, when Oliver is cleaning out the house after Hal's death (and if you've ever gone through that particular out-of-body experience, you'll identify with him right away). We can see that Oliver is shattered, but we don't know anything yet about Hal or their shared and separate lives, or about the specific nature of Oliver's sadness. Beginning with death, the end of an individual's life, has a peculiar elegance, in that it reminds us that human life is not primarily a question of individuals, and that places and objects and memories and threads of consciousness connect us across generations. From that point Mills puts the story together in fragments, going forward into Oliver's tenuous relationship with Anna (Mélanie Laurent) -- a winsome French actress he meets at a Halloween party where he's dressed as Sigmund Freud and carrying his dad's adorable Jack Russell terrier -- and backward into several levels of personal and social history. We get bits of Oliver's childhood, in which his dad is notably absent and his eccentric, showboat mother (Mary Page Keller) dominates the scene, we get highlights from Hal's brief but ecstatic career as an out gay septuagenarian and heartbreaking scenes from his fatal illness, we get startlingly effective little slide shows on the recent history of American culture and on the climate of intolerance that drove Hal into the closet in the first place.

See, here's the thing about the potentially slight and distinctly personal material of "Beginners," or its whimsical tone, or the message of love and tolerance it might be said to impart. Mills is fully aware of those things and embraces them, which is exactly the right decision. I've already mentioned that Oliver's slow-brewing romance with Anna involves a Freud costume and an irresistible pooch, but I haven't brought up the roller-skating, the late-night graffiti bombing or the fact that Anna communicates (at least at first) entirely without speaking. (Or that Arthur, the Jack Russell, occasionally communicates with Oliver via subtitles: "Tell her that the darkness is about to swallow us if we don't do something.") They're like the lovers out of Woody Allen's "Manhattan" mixed with the ones from Chaplin's "Modern Times," dropped into the contemporary Los Angeles of "Exit Through the Gift Shop," and they'd be utterly intolerable if their emotions weren't so raw and so real. And also if Mills didn't interrupt their story to remind us that Anna and Oliver have the freedom to have a wounded, noncommittal, angst-ridden 21st-century relationship because they don't have to go fight in a world war, they're not being persecuted for being gay or Jewish, and nobody expected them to move to the suburbs and start making babies before they turned 30.

But if Anna is Oliver's future tense -- in real life, Mills is married to the artist and filmmaker Miranda July -- the heart of the story lies in his relationship with Hal, which does not entirely conclude with the latter's death. (Another thing those of you who have lost parents will identify with.) It's clear that this relaxed, funny and affectionate dad, who is slowly dying of cancer but won't admit it, is almost a stranger to Oliver, mostly for reasons that have little to do with his sexuality. We see a few different iterations of the hilarious coming-out scene, by the way, in which Hal tells Oliver, "I don't want to just be theoretically gay -- I want to do something about it!" But there's no sitcom-style cutaway to Oliver's shocked or hushed or sympathetic response, partly because it's just not that kind of movie but mostly because he's not a guy who lets his emotions show that easily.

After Hal goes to a gay disco for the first time, he phones Oliver to ask what kind of music they were playing. "That sounds like house music, Dad," says Oliver, and Hal writes it down by the phone so he won't forget the term. Hal gives Oliver a Pride decal and Oliver has to explain to him that, yes, he and the rest of the world knew what that rainbow-striped flag was years and years before Hal did. When Oliver sees his father laughing with his gay-movie-club buddies or passionately making out with his personal-trainer boyfriend, Andy (Goran Visnjic), he views the older man not with dismay or bafflement but with a kind of wonder. He realizes how much of himself Hal sacrificed to play the role of father and husband for all those years, and that rather than feeling bitter about it Hal has chosen to embrace the tail end of his life, not to mention a gay culture he can barely comprehend, with a joie de vivre that Oliver can't even fake on his best days.

It's probably tearing Mike Mills up that his dad isn't here to see "Beginners," both because it's a wrenching testimonial of how much he loved him and learned from him and because it's a marvelously funny, touching, deceptively casual and marvelously constructed work of cinema, miles beyond the arty, A-for-effort potential of "Thumbsucker." In one scene that got to me more than any other in this heartbreaking movie, the tranked-out Hal mistakes the objects in his hospital room -- family photos, the smoke alarm, some decorative painting -- for the elements of an art installation. Hal was a museum curator, and he's right of course: Those things do fit together in some mysterious pattern. Allow yourself to see them in the right way, and they're beautiful.

"Beginners" is now playing in New York and Los Angeles, with wider national release to follow.