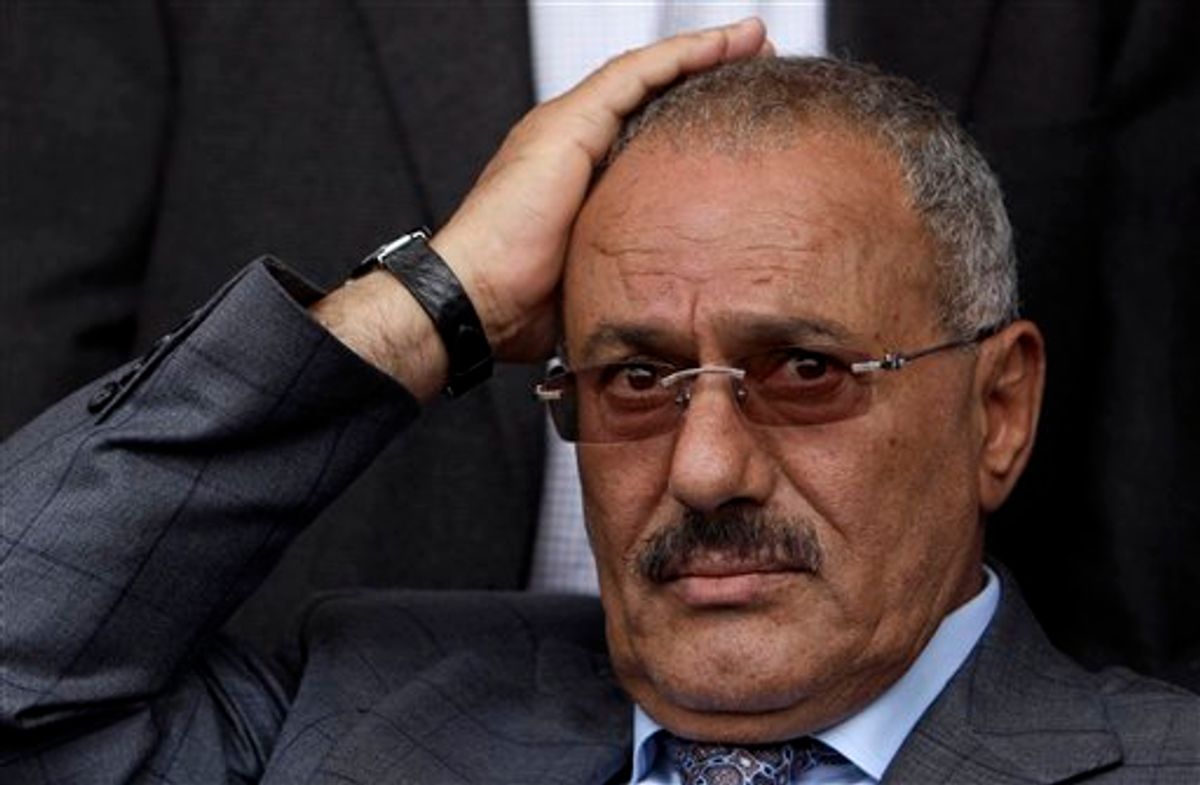 Yemeni President Ali Abdullah Saleh was wounded when opposition tribesmen determined to topple him hammered his palace with rockets Friday in a major escalation of nearly two weeks of fighting with government forces. At least six guards were killed and seven top officials were also wounded, an official said.

The official said Saleh suffered slight injuries to the neck and was treated in the palace. Yemeni state TV quickly aired a statement that Saleh was "in good health," denying a claim on an opposition TV station that the president was killed in the strike.

It was the first time that tribal fighters have directly targeted Saleh's palace in the fighting that has rocked the capital since May 23. Sanaa residents have been hiding in basements as the two sides duke it out with artillery and gunbattles, shaking neighborhoods and sending palls of smoke over the city. The rocket strike came after intense government shelling Friday flattened the homes of two tribal leaders and a military general who also joined the opposition.

Protesters have been trying since February to oust Saleh with a wave of peaceful protests that has brought out hundreds of thousands daily in Sanaa and other cities.

But now the crisis has escalated into a fight for power between two of Yemen's most powerful families -- Saleh's and the al-Ahmar family, who lead Yemen's most powerful tribal confederation, called the Hashid. Sheik Sadeq al-Ahmar, head of the Hashid, announced his backing for the protest movement weeks ago, but the fighting erupted when Saleh's troops moved against al-Ahmar's residence in Sanaa last week.

A volley of three rockets hit Saleh's presidential compound Friday as he and other officials were praying at a mosque inside, the official said, speaking on condition of anonymity because of the sensitivity of the situation. Six presidential guards were killed, according to a medical official.

Seven top officials were wounded, including the prime minister, the deputy prime minister, the parliament speaker and the governor of Sanaa, the official said. The most serious injuries were to Sanaa's governor Nooman Dweid, and Deputy Prime Minister Rashad al-Alimi, who is also the president's top security adviser and who remained unconscious from his wounds, the official said.

After the strike, state TV played national songs and showed footage of Saleh from his years in power, meeting world leaders and conducting visits to Yemeni cities. The state news agency said the president would address the nation within hours.

More than 160 people have been killed in the Sanaa fighting since it began. Through the night, shelling and gunbattles raged in Hassaba, the northern neighborhood where Sadeq al-Ahmar's residence is located and where the battle has been concentrated. Over the course of the battle, tribesmen have overrun more than a dozen ministries and government buildings in and around Hassaba, artillery has demolished homes, and buildings have been set aflame.

Friday morning, troops expanded their shelling to the southern Hadda district of the capital, pounding the homes of two of al-Ahmar's brothers, Hameed and Himyar.

They also targeted the home of Gen. Ali Mohsen al-Ahmar, the commander of the powerful 1st Armored Division who has also joined the opposition but has so far stayed out of the battle. He is not related to Sadeq al-Ahmar. The houses were destroyed, witnesses said.

At the White House, National Security Council spokesman Tommy Vietor said the U.S. is "very concerned" about the escalating violence and urged restraint from both sides, saying the dispute there will only be solved through negotiations.

Top Obama counterterrorism aide John Brennan, who has been meeting with officials in Saudi Arabia and the United Arab Emirates this week, is discussing options for addressing the deteriorating situation, Vietor said.

Washington fears that the chaos will undermine the Yemen government's U.S.-backed campaign against al-Qaida's branch in the country, which has attempted a number of attacks against the United States. Saleh has been a crucial U.S. ally in the anti-terror fight, but Washington is now trying to negotiate a stable exit for him.

Saleh has agreed three times to sign onto a U.S.-backed, Gulf Arab-mediated agreement to leave power in 30 days, but each time he backed out of signing at the last minute.

The mediator of the deal, Abdul-Latif al-Zayani, appealed to Yemenis on Friday to end the fighting. "This is very regrettable and is of no benefit to anyone. The loser is the Yemeni people," al-Zayani, secretary-general of the Gulf Cooperation Council, which groups Gulf Arab nations, told Saudi-owned Al-Arabiya TV. He said the GCC is prepared to exert more effort to mend the differences between Yemenis, but he didn't elaborate.

Tens of thousands of demonstrators continue to mass daily in a central square of Sanaa, as well as in other cities. Thursday night, government forces opened fire on protesters in Sanaa, wounding three. Troops on Friday also fired on protesters in the city of Taiz, south of the capital, wounding two.

Despite the gunfire and shelling, protesters swarmed into a Sanaa main street for Friday prayers, and a series of coffins bearing victims of the past days' fighting were carried through the crowd. The cleric delivering the prayer sermon said Saleh was trying to turn the popular uprising into a personal conflict.

The president "wants to overturn this revolution and show the world that it is a conflict between al-Ahmar and Saleh," Imam Taha al-Mutawakil told the crowd.