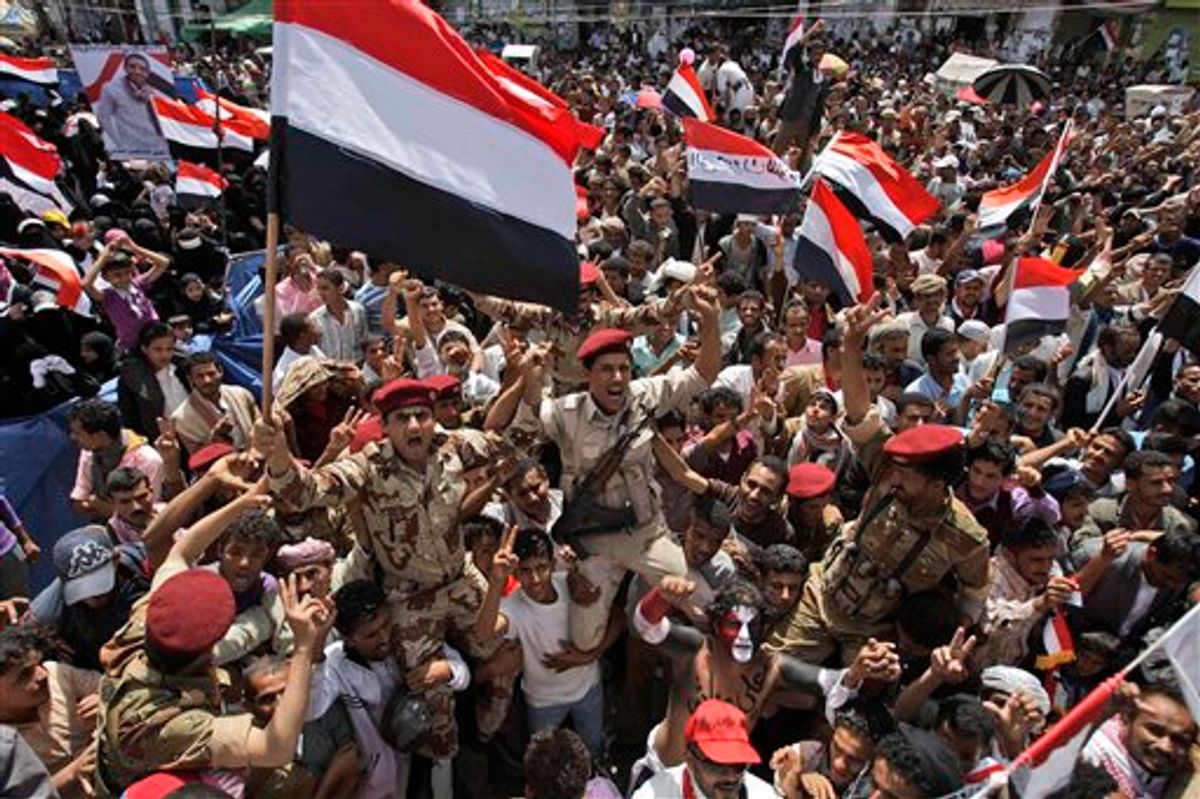 Yemeni army soldiers lifted by anti-government protestors, chants slogans and wave their national flag as they celebrate President Ali Abdullah Saleh's departure to Saudi Arabia, in Sanaa, Yemen, Sunday, June 5, 2011. Thousands of protesters are dancing and singing in the Yemeni capital Sanaa after the country's authoritarian leader flew to Saudi Arabia to receive medical treatment for wounds he suffered in a rocket attack on his compound. (AP Photo/Hani Mohammed) (AP)
--

Protesters danced, sang and slaughtered cows in the central square of Yemen's capital Sunday to celebrate the departure of the country's authoritarian leader for medical treatment in Saudi Arabia after he was wounded in a rocket attack on his compound.

President Ali Abdullah Saleh was undergoing surgery to his chest at a military hospital in the Saudi capital, Riyadh, said a Yemeni diplomat, speaking on condition of anonymity under diplomatic rules. One of Saleh's allies said the president, in his late 60s, was hit by jagged pieces of wood that splintered from the mosque pulpit when his compound was hit by a rocket on Friday.

There was no official announcement on who was acting as head of state. But under Yemen's constitution, the vice president takes over for up to 60 days when the head of state is absent. Vice President Abed Rabbo Mansour Hadi met Sunday with U.S. Ambassador Gerald Michael Feierstein, a strong indication that he is in charge.

Deputy Information Minister Abdu al-Janadi said Saleh would return to assume his duties after his treatment. But in the streets of the capital, joyful crowds were celebrating what they hoped would be his permanent exit after nearly 33 years in power.

Saleh's absence raised the specter of an even more violent power struggle between the armed tribesmen who have turned against him and loyalist military forces. Street battles between the sides have already pushed the more than three-month political crisis to the brink of civil war over this deeply impoverished and unstable corner of the Arabian Peninsula.

But for one day at least, the capital was celebrating. Protesters thronged Sanaa's Change Square, the epicenter of the nationwide protest movement since mid-February calling for Saleh to step down immediately. Some uniformed soldiers joined those dancing and singing patriotic songs and were hoisted on the shoulders of the crowd. Many in the jubilant crowd waved Yemeni flags, joyfully whistling and flashing the "V" for victory signs.

"Who would have believed that this people could have removed the tyrant?" said 30-year-old teacher Moufid al-Mutairi.

Women in black veils joined demonstrators carrying banners that hailed Saleh's departure. One read: "The oppressor is gone, but the people stay."

Activist and rights lawyer Khaled al-Ansi said families and children were arriving in the square in party clothes.

"People have trickled in since dawn to the square. Some have not slept yet. It is like a holiday," he said.

But there were also fears that the president would attempt a comeback or that his son Ahmed, who heads the Republican Guard, would take power or even try to leave the country in ruins if he feels he has no way out.

"I fear the battle of the desperates from the regime," said human rights activist Majed al-Madhaji. "This is the biggest fear, that they decide to bring down the temple."

Yemen's conflict began as a peaceful protest movement that the government at times used brutal force to try to suppress. It transformed in recent weeks into armed conflict after the president's forces attacked the home of a key tribal leader and one-time ally who emerged as a dangerous rival after throwing his support behind the uprising. The fighting turned the streets of the capital, Sanaa, into a war zone.

Other forces rose against Saleh at the same time. There were high-level defections within his military, and Islamist fighters took over at least one town in the south in the past two weeks. Saleh blamed the tribal rivals for the attack on his compound Friday that killed 11 bodyguards and wounded at least five senior government officials in addition to the president.

In Taiz, Yemen's second largest city, dozens of gunmen attacked the presidential palace on Sunday, killing four soldiers in an attempt to storm the compound, according to military officials and witnesses. They said one of the attackers was also killed in the violence. The attackers belong to a group set up recently to avenge the killing of anti-regime protesters at the hands of Saleh's security forces.

Nine soldiers were killed when gunman ambushed a military convoy in the south, officials said. They spoke on condition of anonymity because they were not authorized to talk to the media.

Saleh has been under intense pressure to step down from his powerful Gulf neighbors, who control a large share of the world's oil resources, and from longtime ally Washington. They all fear Yemen could be headed toward a failed state that will become a fertile ground for al-Qaida's most active franchise to operate and launch attacks abroad.

In a display of the kind of political maneuvering that has helped keep in power through numerous perils, he agreed three times to a U.S.-backed Gulf Arab proposal for ending the crisis only to back out at the last minute.

Now, Saleh's injuries and his treatment abroad provide him with what could turn out to be a face-saving solution to exit power.

A Yemeni official, who spoke on condition of anonymity because he wasn't authorized to release the information, said Saleh left with his two wives and some of his children. The official said he and others learned about Saleh's plans only after the president left. A Saudi medical official said his condition was "not good."

Saleh did not issue a decree putting his vice president in charge while he is away in Saudi Arabia. A terse statement from his office only said he had arrived in Saudi Arabia for medical tests and that he was in good health.

The president's departure was shrouded in extreme secrecy and many in the government did not know of his early Sunday departure until he had actually arrived in Saudi Arabia.

Significantly, military officials said Hadi, the vice president, met late Saturday night in Sanaa with several members of Saleh's family, including his son and one-time heir apparent Ahmed, who commands the powerful Republican Guard. Others who attended the meeting included two of the president's nephews and two half brothers. All four head well-equipped and highly trained units that constitute the president's main power base in the military.

That such powerful members of Saleh's family have been left behind in Sanaa suggests that the president's departure will not necessarily end the crisis in Yemen and that he could be trying to maintain control and planning to try to return.

For one thing, fighting could continue between the tribal forces and pro-regime units led by loyal members of Saleh's inner circle. In his more than three decades in power, Saleh administered an elaborate patronage system to ensure the loyalty of military officers and some of those beneficiaries would be tempted to continue the fight in the hope of keeping the perks they had enjoyed under the president.

If Saleh's departure causes the regime to collapse, tribal chieftains would want to take credit for the ouster of the regime and get a dominant role in the country's future. Given the conservative politics of tribal leaders, that could well place them on a collision course with the youth groups that have for months staged peaceful demonstrations in Sanaa and across much of the country to demand Saleh's ouster and political reforms.

Al-Ahmar announced the Hashid's support for the protest movement in March after widespread outrage at a sniper attack that killed dozens of protesters in Sanaa. But his fighters remained on the sidelines for weeks.

Then last week, Saleh's forces moved against al-Ahmar's fortress-like residence in Sanaa, and the tribe's fighters rose up in fury. They fought pitched battles that engulfed the Sanaa in violence.

The battles reached a crescendo Friday when a rocket slammed into the mosque in the presidential compound during a prayer service, killing 11 bodyguards and seriously injuring five top officials who were worshipping along with Saleh. The five officials wounded were taken to neighboring Saudi Arabia for care.

The president delivered an audio address hours after the attack, his voice labored, with only an old photo shown. His failure to appear in public despite repeated promises raised speculation that his injuries were more severe than acknowledged.

Saleh arrived in Saudi Arabia around 1 a.m. and was immediately taken to a nearby military hospital, according to a Saudi medical official, who described the president's condition as "not good." The official, who spoke on condition of anonymity because he was not authorized to talk to reporters, did not elaborate.

Sheik Mohammed Nagi al-Shayef, a tribal ally, said he met the president Saturday evening at the Defense Ministry compound in the capital.

"He suffered burns, but they were not serious. He was burned on both hands, his face and head," al-Shayef told The Associated Press. About 200 people were in the mosque when the rocket struck, he said.

Saleh's departure likely means his rule is over, said Christopher Boucek, a Yemen expert with the Carnegie Endowment for International Peace.

"I'd hate to rule anything out for President Saleh," Boucek said, noting that Saleh is a proven political survivor who has often beat overwhelming odds. "But I can't see how he can come back and still be president."