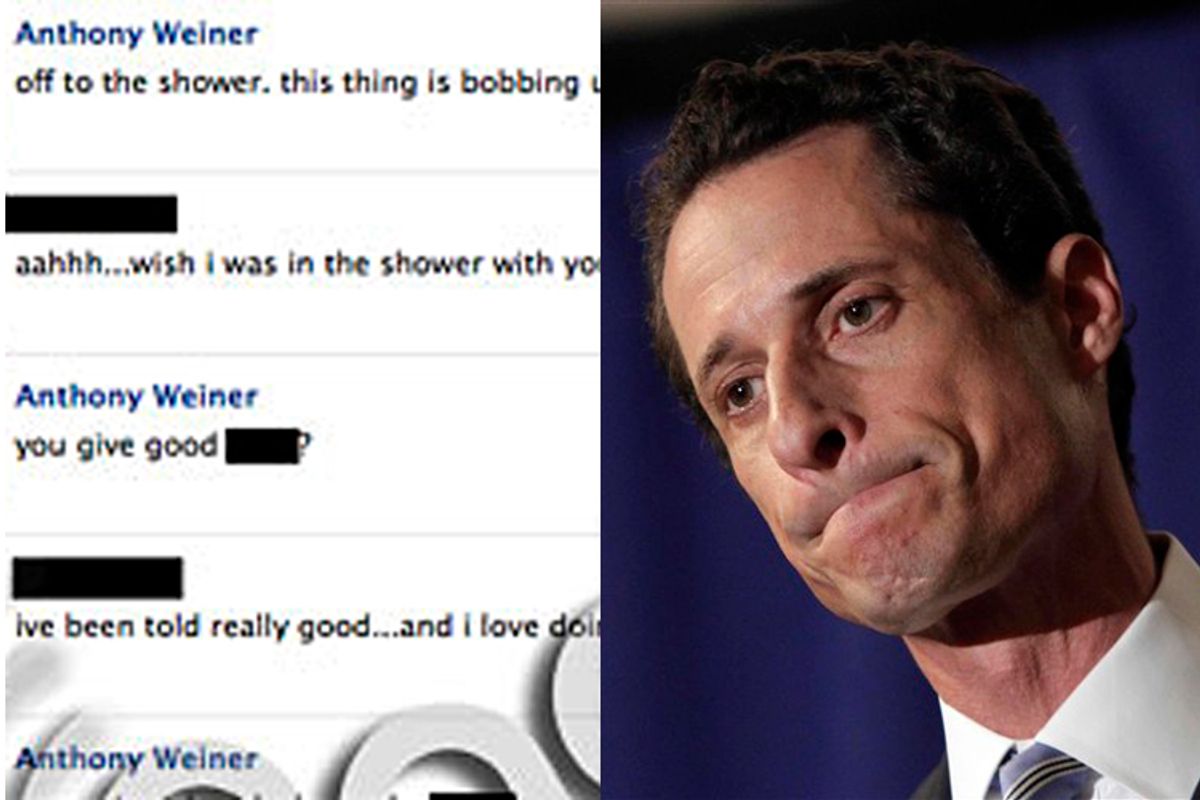 U.S. Rep Anthony Weiner, D-N.Y., addresses a news conference in New York, Monday, June 6, 2011. After days of denials, a choked-up New York Democratic Rep. Anthony Weiner confessed Monday that he tweeted a bulging-underpants photo of himself to a young woman and admitted to "inappropriate" exchanges with six women before and after getting married. (AP Photo/Richard Drew) (Richard Drew)
--

The sexy email or cellphone photo is the virtual equivalent of the O face. It might -- and I said might -- be really exciting in the heat of the moment. But out of context, it will likely fall somewhere on the scale of sad to hilarious. And if you need proof, look no further than the sorry body of evidence left by Anthony Weiner, U.S. representative for New York's 9th Congressional District and hasty tweeter of unfortunate bulge shots.

What began as a single anonymous image attributed to the representative became a full-fledged treasure trove of prurience on Monday, when the man who last week called himself a "victim"  admitted he's been sending around sexed-up emails and pics to half a dozen women over the past three years.

And right on cue, the evidence began emerging. There was the instantly infamous photo of the shirtless (and admirably ripped) New Yorker, flanked by photos of him with his family and fellow indiscretion enthusiast Bill Clinton. There was the photo of him relaxing on the couch with two cats, captioned "Me and the pussys," which he allegedly sent to a young woman last month from his AnthonyWeiner@aol.com account. Note to all would-be Internet lotharios: There is nothing less conducive to getting anybody either hot or bothered than an AOL return address. There was the claim of the existence of an image that Andrew Breitbart claims is "extremely graphic, and leaves nothing to the imagination." The fact that it's called "ready.JPG" should be a clue.

And then there are the conversations, allegedly sent from Weiner's old Facebook account and published by Radar. "off to the shower. this thing is bobbing up and down," reads one from March. Now, in the cold light of day, that's just silly. But his online sex partner wrote back exactly as he was no doubt hoping, "Aahhhh… wish I was in the shower with you to help." It steamed up, sort of, from there:

"You give good head?"

"ive been told really good… and I love doing it"

"wow a jewish girl who sucks ____! this thing is ready to do damage…. Thinking about ___ your hot mouth with my ___" [redacted by Radar, your guess is as good as mine]

"ridiculous bulge in my shorts right now… wanna see? It wont go away. And now I'm taking pics of it, making me harder still….jeez I have to go. Ill hit you later." Hit you later? What is he, the eTrade baby?

Many of Weiner's dalliances appear to have been consensual, replete with mutual dirty talk and exchange of images. That makes some of the story less unsettling than the cases of Chris Lee and Brett Favre, in which all the shirtless/pantless attention seems to have been unbidden (though it still doesn't justify in the least the unsolicited crotch shot directed toward no doubt former fan Genette Cordova). But what Weiner's story is, on a grand scale, is a classic case of how unsexy -- and poorly spelled -- so much of the business of getting off online really is. "Pussys," Weiner? That makes me sad face emoticon followed by disparaging acronym.

While it's easy to laugh at Anthony Weiner's tawdry come-ons -- and believe me, I'm nowhere near exhausted on that front -- there is also something painfully vulnerable in them as well. Sex -- both the real and virtual kind -- is pretty silly business. As Lord Chesterfield once said, "The pleasure is momentary, the position ridiculous, and the expense damnable." At least in Lord Chesterfield's day, the risk of that ridiculousness being shared with the world by some muckraking hack was nonexistent. The expense has never been more damnable.

The moral and ethical failings of Anthony Weiner are now a matter of public record. But while we're chortling over his clumsy, intimate exchanges and looking at those mortifying photos, it's humbling to imagine how any one of us would fare in, quite literally, the same position. Ask not for whom the forwarded email tolls. "The Daily Show" riotously pointed it out last week: If you've got a few compromising images out there, or you've ever hastily fired off a few dirty words as a promise of what was to come later or to make it through a long night apart, you too might have a little Weiner inside you. Welcome to the club.