Alice Pyne still has a few things she'd like to do. Now the Internet community is making them happen 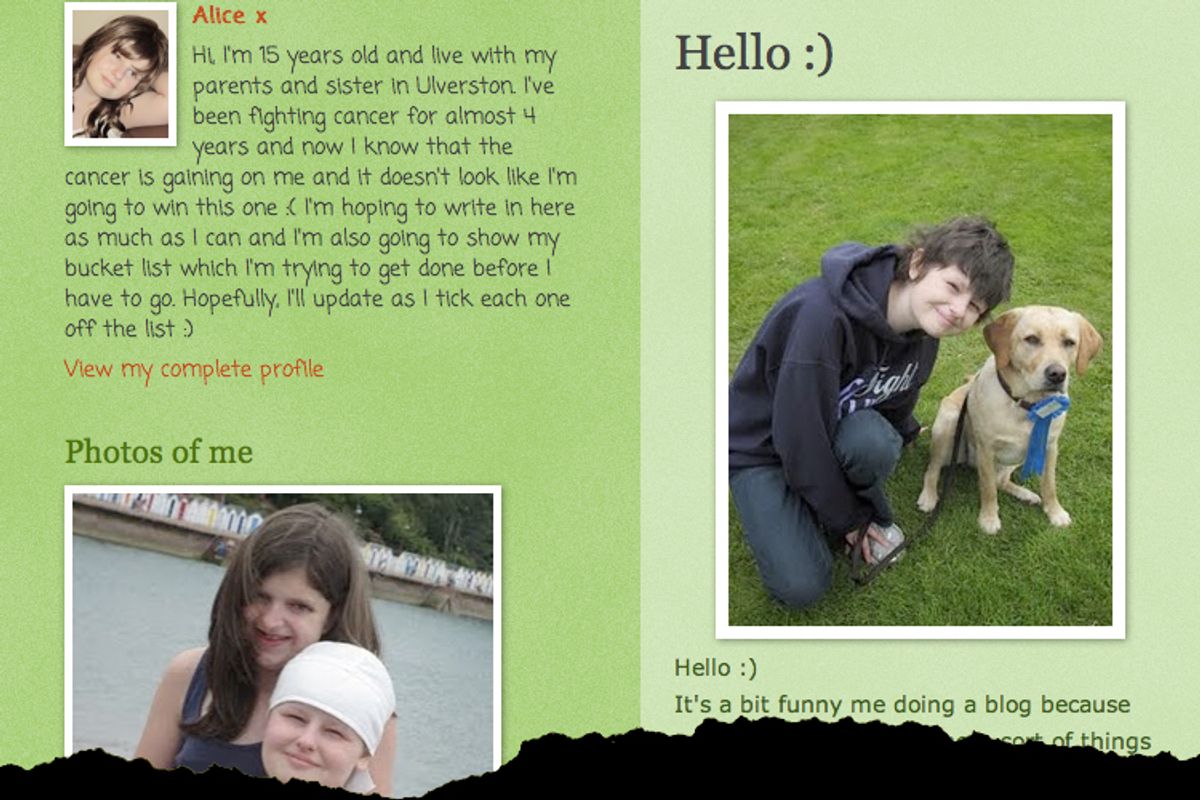 Alice Pyne is a typical 15-year-old British girl. She likes Cadbury's chocolate, her friends and her dog. She also has terminal Hodgkin's lymphoma. Earlier this week she began a blog. "The cancer is now spreading through my body," she wrote. "It's a pain because there's so much stuff that I still want to do." And she wrote down what they were.

That's all it took. Faster than a speeding Rebecca Black video, Pyne's bucket list went viral, with well-wishers around the world doing double time to make her wishes a reality. British Prime Minister David Cameron mentioned her during weekly parliamentary Question Time: "I am sorry to hear about the situation facing Alice and what she's going through, and our thoughts go out to her and her family." And Katy Perry and Justin Bieber have tweeted their support for her.

On Monday, Pyne wanted "To meet Take That." By Wednesday she could write, "I'm off to see Take That this weekend, can you believe it? I am so excited and really can't wait, I just hope that I don't get ill or something daft."

But more significantly than a few easy mentions from celebrities, Pyne's list has inspired a surge of support for her other wishes: "To make everyone sign up to be a bone marrow donor," to raise funds for her sister Milly's "Race for Life" for cancer research, and to bring attention to Post Pals, an organization that connects sick children with people who want to send them supportive cards and letters. Though there are some things on her list she'll now never be able to cross off, like becoming a dolphin trainer or swimming with dolphins, she writes that "It looks like the other things I wished to do are being organised so thank you to everyone for that. I feel a very lucky girl."

Why has Pyne's story taken on such a fierce life of its own? As many of us know all too well, cancer is, as Pyne understatedly writes, "a pain." Sickness is fraught with utter, agonizing helplessness, both for the person experiencing it and the wider community standing by and witnessing it. And faced with a grim diagnosis, Pyne has chosen not to retreat but to engage, to show that the essence of our humanity remains even as the body is engaging in cruel acts of sabotage.

We can't stop disease from invading our lives. We can't cure every terrible illness that barrels through the door and attacks our children and our friends and our fathers and ourselves. There's so much we can't do. That's why it feels amazing when someone gives us the chance to do something we can. To send a card. Bake a lasagna. Donate a pint of blood. Raise a little money for research. It's not just because the sick need it, but because we all need it. In our most grief-laden moments, we search ferociously for meaning and purpose, and we cling to them for dear life. Because life, as Alice Pyne would surely tell you, is plenty dear.