Son of Yemen leader digs in to keep father's power 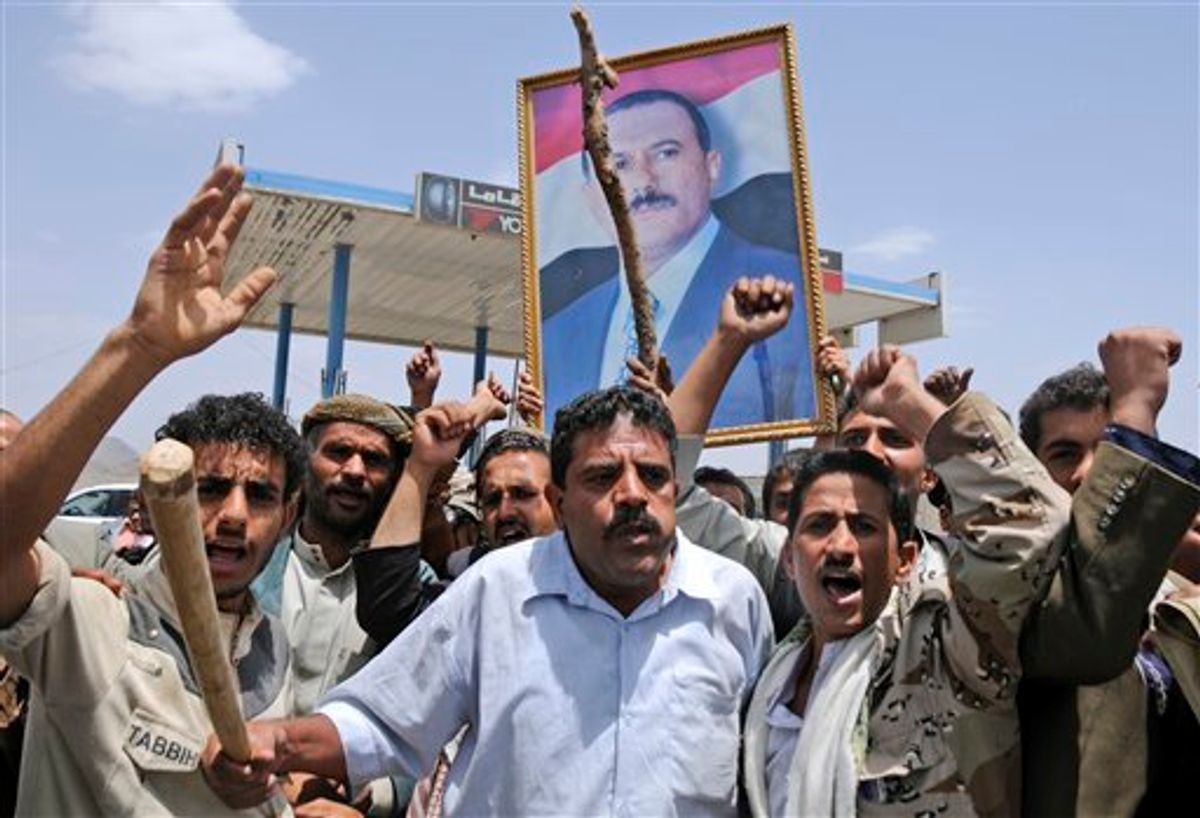 Supporters of Yemeni President Ali Abdullah Saleh hold up his portrait and chant slogans as they celebrate news that Saleh's health is stable, after being taken to Saudi Arabia to receive medical treatment for wounds he suffered in a rocket attack on his compound, in Sanaa, Yemen, Thursday, June 9, 2011. Government troops trying to recapture areas held by Islamic militants have killed 12 suspected al-Qaida members in the troubled southern province of Abyan, the Defense Ministry said Thursday. (AP Photo/Mohammed Al-Sayaghi) (AP)
--

Yemen's president, out of the country recuperating from wounds from a rocket attack, still has a powerful hand on the ground at home: his son. Ahmed Ali Saleh commands Yemen's most highly trained troops, has them deployed in the streets of the capital and seems determined to preserve his father's rule against enormous pressure at home and abroad.

The grip of President Ali Abdullah Saleh's son -- and his nephews, who also command major military units -- locks Yemen into a standoff between his forces and the opposition that, if it drags on, will almost inevitably collapse back into new violence. It also appears to be a major obstacle in U.S.-backed efforts to negotiate an end to the crisis while the president is away.

The 42-year-old Ahmed is operating from the presidential palace and his father's main office in a military compound in the capital of Sanaa, relegating Vice President Abed Rabbo Mansour Hadi -- nominally the acting president -- to work from his home or his office in the Defense Ministry, several ruling party and government officials said.

The younger Saleh and his cousins have also defied pressure from the vice president to withdraw their troops from the streets of Sanaa as part of a fragile cease-fire with opposition tribesmen. In fact, since the truce began a week ago, Ahmed has brought more tanks and troops to positions in the capital's Hassaba district near the home of the tribesmen's leader, Sheik Sadeq al-Ahmar, a high-ranking military officer said.

"The president's son is following a policy of escalation, as if to say he is the legitimate heir of his father," the officer said. He and other officials spoke on condition of anonymity because of the sensitivity of the situation and for fear of retaliation from the president's allies.

That could threaten U.S. efforts to work out a stable transition from Saleh's rule during his absence.

The cease-fire will likely not last long if the opposition feels Saleh's regime is holding out, and new violence would throw the country into deeper chaos. The United States is concerned that al-Qaida militants in Yemen -- who make up the terror network's most active branch -- are already gaining power in remote parts of the mountainous country.

President Saleh was evacuated to Saudi Arabia last weekend for treatment after he was wounded in a rocket strike on his palace. The hundreds of thousands of Yemenis who have been protesting against him for months and the heavily armed tribesmen who battled government troops for two weeks in Sanaa are determined to ensure that his departure means the end of his nearly 33-year-rule.

But Saleh's relatives have much to lose if he falls. The president elevated his relatives to key positions in his regime -- and the opposition would likely be unwilling to see them remain. One of the opposition's major grievances even before the current unrest was the widespread belief that the president was grooming Ahmed to succeed him.

Ahmed commands the powerful Special Forces and Republican Guard. The other top internal security forces are under the command of the president's nephews, Tareq, Yahia and Ammar. All are better trained and equipped than the regular military, parts of which have defected to join the protesters. The president's half brother is head of the air force.

The president's allies insist he will return soon, despite reports that Saleh, in his late 60s, was heavily burned.

"The information on the president's health coming to the top leadership, particularly to Ahmed Ali, are reassuring, and the coming days will bring happy surprises for Saleh's supporters," said Yasser al-Yamani, a senior ruling party official and deputy governor of Sanaa.

The United States and Saudi Arabia are trying to convince the ruling party to move forward with a Gulf Arab-brokered deal that would end Saleh's rule, hand power officially to his vice president, create a unity government between the ruling party and opposition and bring new elections within two months. Saleh himself balked three times at signing the deal.

At a gathering of the ruling party leadership on Sunday, one faction -- including the vice president and Saleh's top political adviser, Abdel-Karim al-Eriani -- was in favor of opening discussions with the opposition, but they were blocked by hard-liners close to the son, officials who attended the meeting said, speaking on condition of anonymity to discuss the internal talks.

"The initiative cannot be discussed until the president returns," al-Yamani told The Associated Press.

Abdullah Awabal, an opposition leader, said there are "strong opposition and extreme positions in the ruling party." He said al-Eriani met informally with him and other opposition figures and spoke of "obstacles" within the party, saying more time is needed to find a solution.

At the same time, Hadi has been pressing for troops under the son and cousins' command to pull off the streets. At the ruling party session, Hadi "took a sharp tone and said he would not allow anyone to block efforts to withdraw troops and calm the security situation," one of those who attended said.

But Ahmed's Republican Guards and Special Forces have remained out in force in Hassaba, the center of last month's fighting. Some units withdrew this week, but others moved in and set up new checkpoints in the district, where the two sides had blasted each other with artillery, rockets and automatic weapons. He has also sent increased troops to Taiz, Yemen's second-largest city, where they have clashed with opposition tribesmen in recent days.

The U.S. ambassador to Sanaa has met twice with Ahmed -- once in the company of the vice president and once alone -- since the father's evacuation to press the need to calm the situation, several Yemeni government officials said.

So far, al-Ahmar's tribesmen have adhered to the cease-fire and pulled back from many of the government buildings they occupied during the fighting. But they complain of daily harassment and provocations by the government forces -- including snipers who fire on residents trying to return.