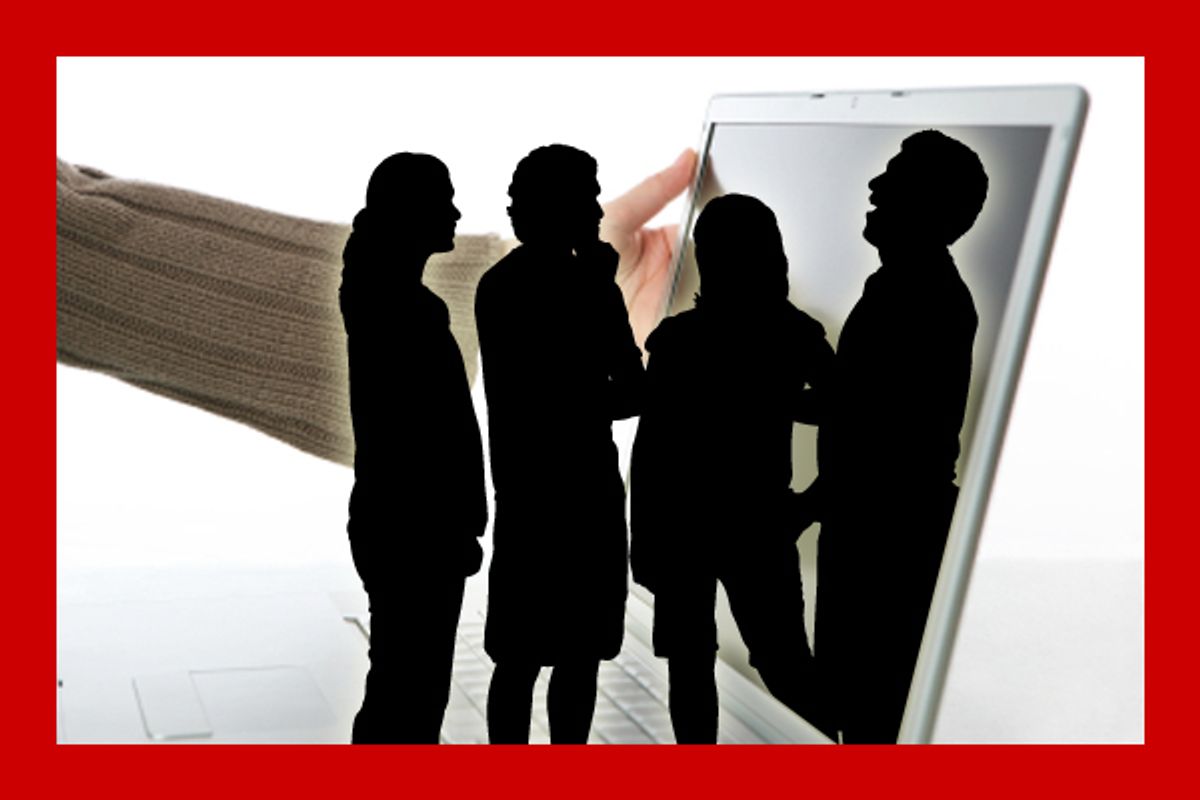 One of the most fulfilling, enduring relationships of my life was with a few hundred people, most of whom I never met.

It started, as all great loves do, unremarkably. It was in the days when the Web was brand-new and my family was describing my career as "something to do with computers." I was already ancient in online community years, an instant addict from the moment in 1992 I first heard the word "modem." (Kids, look it up.) I cruised around Usenet, but my real home was the WELL, an online outpost that attracted disaffected Gen-X Bay Area denizens like me. Back in the mid-'90s, the nexus of fledgling community geeks and fledgling journalists was a tiny, tiny place, and all 10 of us knew each other. One sunny afternoon at a barbeque, I spied Scott Rosenberg and Andrew Leonard talking to each other. Soon after, Laura Miller suddenly clammed up when I asked her what she was working on lately. Right under my nose, Salon.com was being born.

After an erratic few years freelance writing (Andrew O'Hehir was my boss when I was, much too briefly, a critic for SF Weekly), I'd settled into a comfortable and decent-paying gig as community manager at the still new CNET. Then Scott and Laura told me that David Talbot was starting something new, a "smart tabloid" that, gasp, would not have a print component. They were looking for someone to host the community division. The format was clunky and ugly. The proposed conversation "folders" were pretty arbitrary. Talbot took me out to lunch, and I was seduced before the food even arrived.

Table Talk in its early days was, in many ways, what it wound up becoming in its later days. It was small and manageable, but vibrant, passionate and at times utterly maddening. We had back then a completely open system, a mostly male population, and one that immediately distinguished itself from Salon proper. We'd originally envisioned Table Talk as a place to talk about Salon stories. The TTers saw it, rightly, as a place to talk to each other. Editorial soon seemed to agree -- I'll never forget the Salon holiday party, many years ago, in which a high-ranking staffer personally singled out every division of Salon for its achievement -- except the community. I always thought of our unofficial motto as "Flying Under Your Radar Since 1995."

It was at times grueling. One of my first ever stories for Salon was about all the flaming I endured in there, as one of a handful of females and the only one who held the sysop controls. (I could easily have written it today -- "For socializing, we're sitting in front of computer monitors typing to strangers, 'You're an asshole.'") For the first few months of TT, we didn't delete any posts under any circumstances, until we finally had an anguished meeting about it and decided we needed to come up with a set of community standards -- and start enforcing them. What blew up next was our first surge of angry walkouts, a handful of bannings, and at least one master's thesis project. There would be many, many more thrashes to come.

Time passed, and the community changed. One day, someone started a topic in our Private Life folder about being an "Intelligent woman, home w/children seeking same..." It opened the floodgates for women in TT, instantly diversifying us and giving us a new balance -- and at times, a whole new kind of crazy. We  also attracted a rich crop of bookworms, and hosted some of the first online author Q&As with the likes of Rebecca Wells, Paulo Coehlo and Jane Goodall. Our political junkies grew organized and motivated. Our "Buffy the Vampire Slayer" and "Big Brother" and "Sopranos" addicts made TT an appointment spot for post-show conversation. Stories were told, jokes exchanged, terrible losses shared and heartaches consoled, too many to recount, but too wonderful to forget.

Along the way, people became friends. They fought, and became enemies. Many of them were extraordinary. A few of them were flat-out nuts. We kicked out a few people, usually with much internal conversation and much angst, some of whom persist today in the comments section of Salon. Real trolls never go away. They just keep creating new user names.

I spent some of the most important days of the last several years in Table Talk. I watched the Monica Lewinsky scandal unfold in a series of posts over an interminable period in which I was living in Boston. I followed the outpouring of grief over the death of Princess Diana, and the jubilation over the election of Barack Obama. On Sept. 11, I posted updates from my debris-deluged apartment in Brooklyn, and of my concern for my stepfather, who worked in the north tower. It was for me the quintessential Table Talk moment, one in which a news story and a personal story collided, and we came together to share information and express serious concern and genuine compassion.

I've had the tremendous pleasure of meeting a few Table Talkers offline, though not nearly as many as I wish. The people I've met have been almost universally just as lovely and funny and quick offline as on, and even the one person who surprised me with his real-world shyness remains one of my favorite TTers of all time. As the woman with the nickname "Big Nurse" and "Bossy Stick," I always knew I could only get so close. My admiration for the community has always been deep, but my relationship with it has, by necessity, been different.

Sometimes I wonder how much of it was real. A few years ago, a prominent user disappeared, and a TTer who'd been her friend posted that she'd died. There was much genuine online grief, in which I shared. Then the friend emailed me that the woman's online life -- one that included a husband and children and stories of their day-to-day vicissitudes -- had all been fiction. I'll never know who was telling the truth, or for that matter, who either of the women really were.

What I do know was true is that even though I was the Big Nurse, TT still treated me mostly as a friend. When I became a mother, it was the other moms there who welcomed me and made me feel less alone in my sleep deprivation and toilet training. And though I left TT to move over entirely to Salon's editorial team two years ago, when I shared my cancer diagnosis last year, the TT community got together and sent a generous gift and good wishes. On the days when I despair for the Internet, and the vast number of douchebags who inhabit it, I remember that kindness, how unexpected it was, and how much it meant.

Over the years in TT, we occasionally had members who said they were suicidal, and their virtual friends rushed to offer very real assistance. We had a few members meet and fell in love. Some even had kids. There are people living now in the world because of this funny place, and of that I am proudest. And though this is the end of a nearly 16-year adventure that I adored being part of, it's not the end of the friendship and the wisdom and the sass that made this, truly, one of the very best places to be on the Net. We'll see you around, I promise. And I'm not saying that as the Bossy Stick. I say it as just one of the Buffistas, the Tarts, and always, from the bottom of my heart, surely the most grateful of all TTers.