This week we're on the fence about: Cat lady dating videos, Kim Kardashian's honor, and Shia LaBeouf taking a stand 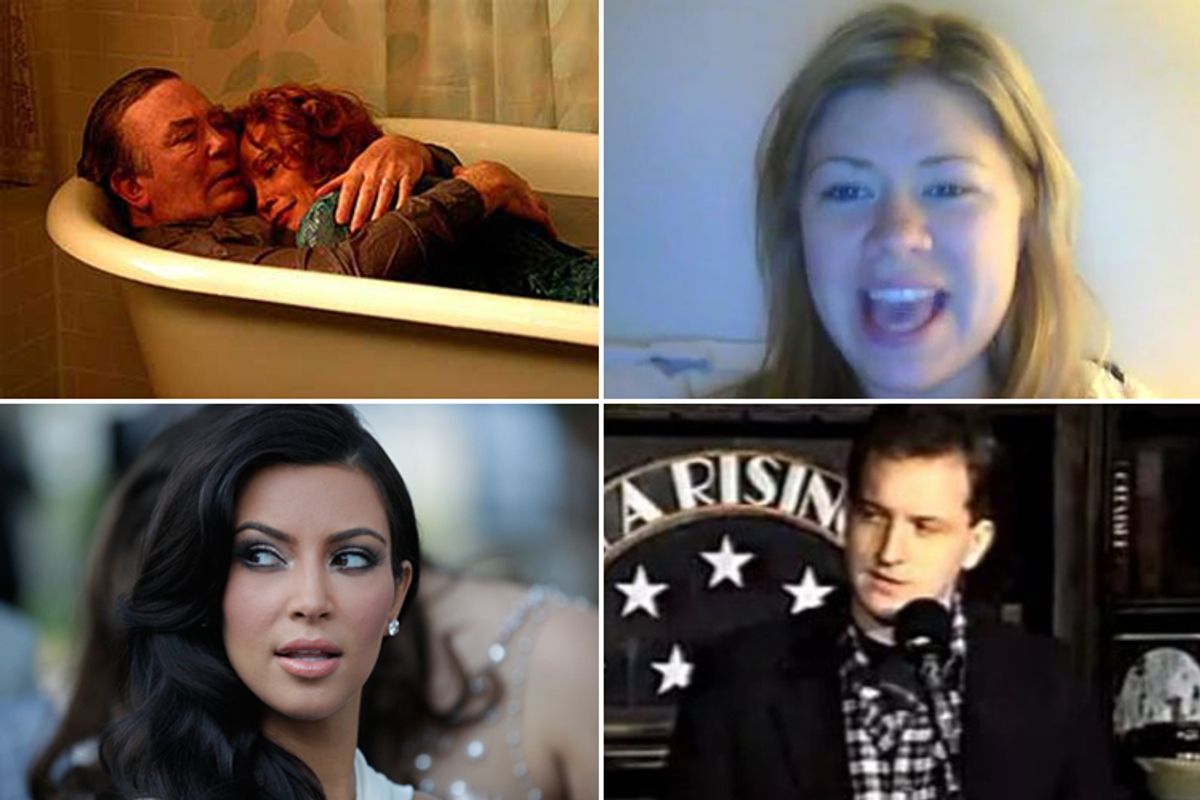 How do these things make you feel?
--

This is the first week it's really felt like summer. You know: the unbearable heat, the freezing cold of the air-conditioners in your office, the smell of Anthony Weiner cooking over an open flame. (Sorry.) In this muggy weather, it's hard to know exactly how you feel about a certain piece of  culture news until you get a couple of days distance from it. That's why we're here to help.

1. Kim Kardashian's alleged infidelity: She's trying to sue In Touch magazine for saying she had an affair with New England Patriots' Bret Lockett while dating her now-fiancé, Kris Humphries. Guess we'll have to wait till the twitpics come out to know the truth.

2. Edie Falco not knowing who Kim Kardashian even is: To be fair to Kim, she probably doesn't know who the "Nurse Jackie" star is, either.

3. Louis C.K.'s stand-up routine from 1987 surfaces: He had hair! And it was really, really awkward. We prefer the Louis of today to the one making dolphin noises.

4. The (verb) of (proper noun), creator of Mad Libs, makes me (adjective): That's not in poor taste, by the way. That's my memorial to Leonard Stern, who passed away at 88 as an Emmy Award-winner and great game-creator. Of course, the New York Times has a much better tribute, so read that as well.

6. Sacha Baron Cohen as Saddam Hussein in a new "biopic": The movie is called "The Dictator" and apparently it's based on a book Saddam wrote called "Zabibah and the King." What, Sacha, didn't have enough time to come up with a mockumentary about Osama?

7. The best/worst dating video of all time: Debbie likes cats and soul mates!

Don't worry, it's a fake, in case you were feeling bad for laughing.

8. Zach Galifianakis sans beard is pretty hot: He pulled off this look back in 2002 as well:

9. "Big Fish" optioned for Broadway: Completing that perfect trajectory of short story, to Tim Burton movie, to musical that Julie Taymor will be begging people to let her direct.

10. Jack White and model Karen Elson send out invitations to their "divorce party": Well, that's one way to break it to the kids.