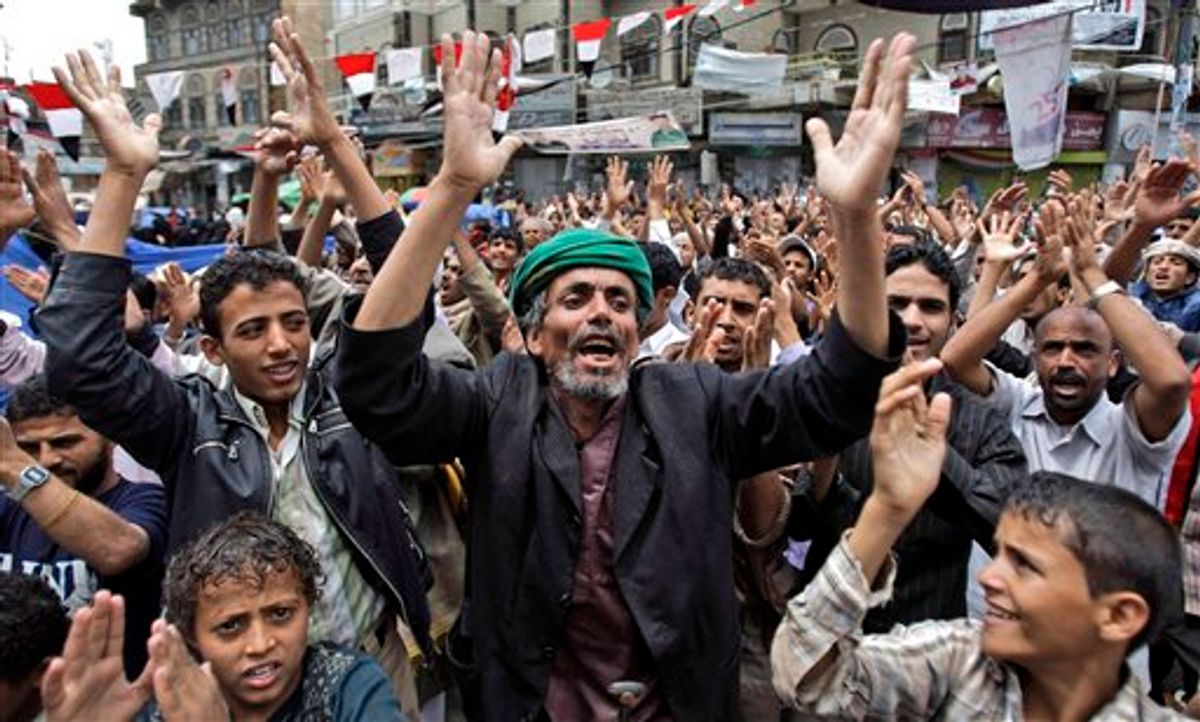 Yemen's acting president agreed on Monday with opposition parties to begin discussions on how to transfer power from the country's embattled president, an opposition spokesman said.

The official, Abdullah Oubal, said the agreement provided for the opposition and President Ali Abdullah Saleh's ruling party to open a dialogue to find a way to ease Saleh out of office in accordance with proposals put forward by Yemen's Gulf neighbors. Saleh has publicly accepted the proposals in the past, but has been evasive about implementing them.

Monday's agreement may not end the country's political impasse or prevent renewed clashes between forces loyal to Saleh and armed tribesmen opposed to his rule. However, it suggests that the acting president, Abed Rabbo Mansour Hadi, is exercising his constitutional powers despite the vast influence wielded by Saleh's inner circle and family.

The meeting was the first between an alliance of opposition parties and Hadi, who has been Yemen's acting president since Saleh left for Saudi Arabia on June 5 for medical treatment from wounds he suffered in an attack on his compound in Yemen's capital, Sanaa.

A senior Yemeni official in the Saudi capital, where Saleh is hospitalized, said Tuesday that the president's condition was stable but not improving. The official spoke to The Associated Press by telephone and on condition of anonymity because of the sensitivity of the subject.

Monday's meeting, thought to have been convened under Western pressure, took place at Hadi's Sanaa residence, which witnesses said was surrounded by members of the special forces, an elite outfit led by Saleh's son and one-time heir apparent, Ahmed.

Top ruling party officials Sultan al-Burkany and Ahmed Ben Daghr joined Hadi on the government side for the negotiations, according opposition spokesman Oubal.

Tensions remain between forces loyal to Saleh and armed tribesmen led by Sadeq al-Ahmar, a one-time ally of the president who switched sides in March to join protesters staging mass demonstrations to demand the president's ouster.

The two sides fought fierce street battles in Sanaa in late May and early this month, causing extensive damage to several neighborhoods. Officials close to al-Ahmar said Monday that 100 of their fighters were killed and another 325 wounded in the fighting between May 23 and June 4.

In the capital Sanaa, news of the agreement between Hadi and the opposition appeared to have no immediate impact. Witnesses said troops loyal and opposed to Saleh have been significantly reinforced, with more checkpoints and plainclothes gunmen visible on the streets.

Beside the armed tribesmen, troops from the elite 1st Armored Division, whose commander mutinied and joined the protesters in March, have been squaring up in the capital against the presidential guard and the special forces, both under the command of the president's son.

The massive anti-government protests which erupted across Yemen in February have weakened the central government. Militants -- including suspected al-Qaida members -- captured two southern towns in late May, fueling concerns that the terror group could take advantage of the chaos.

The Yemeni officials said the airstrikes struck Jaar, one of two militant-held towns in the province of Abyan. The other town is Abyan's capital, Zinjibar.

The upheaval that has gripped Yemen since mid-February has left Saleh too preoccupied to focus on the fight against al-Qaida, and the United States has stepped up covert operations in Yemen with airstrikes and drone attacks targeting members of the terror network.

The recent U.S. operations come after a nearly yearlong pause in American airstrikes, which were halted amid concerns that poor intelligence had led to bungled missions and civilian deaths that were undercutting the goals of the secret campaign.

The officials in Abyan and Taiz spoke on condition of anonymity because they were not authorized to speak to the media.