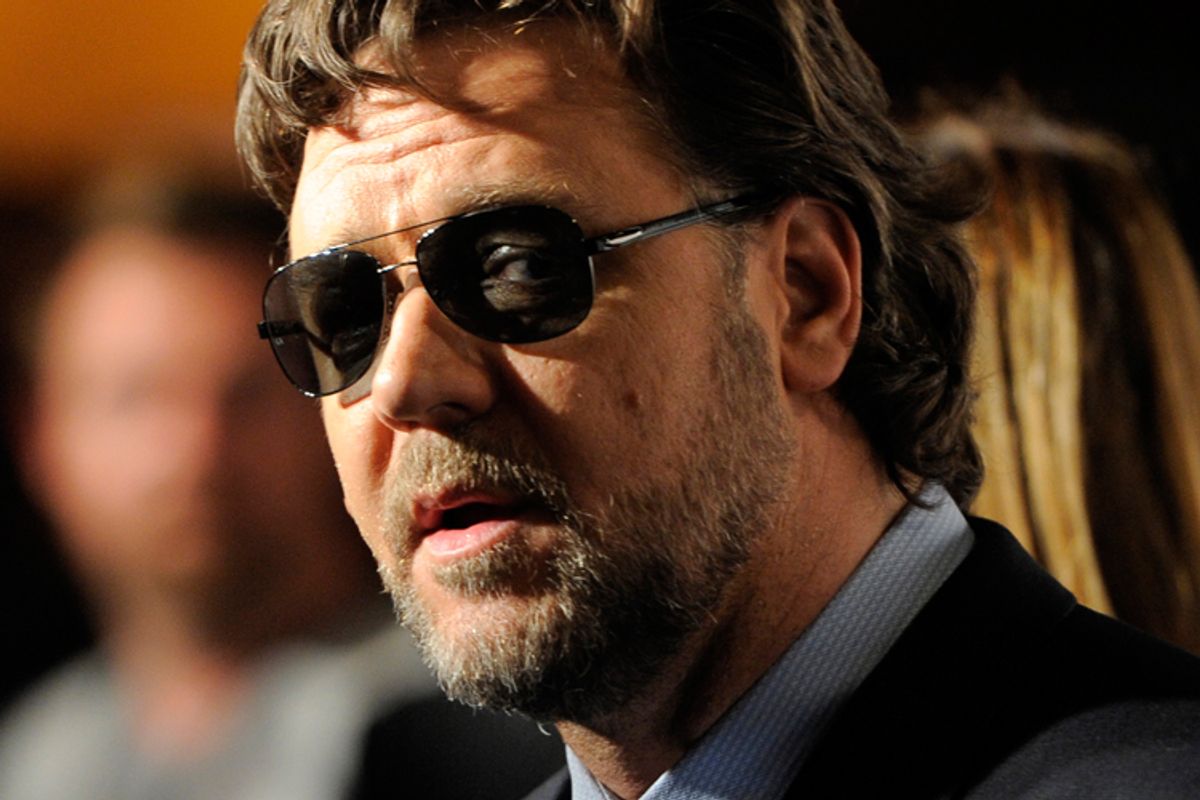 Maybe a man who's got a history of phone throwing isn't the best judge of what's "barbaric." But let it not be said that Russell Crowe can't become a little more civilized.

The Academy Award-winning actor and father of two sons came under fire last week for a rambling series of tweets that kicked off with a declaration that "Circumcision is barbaric and stupid. Who are you to correct nature? Is it real that GOD requires a donation of foreskin? Babies are perfect."

Predictably, he was deluged with rebuttals from followers, and Crowe, never one to back down from a fight, seemed happy to take them all on. When a user responded that circumcision is "more hygienic and nobody remembers it," he lobbed back, "Hygienic? Why don't you sew up your ass then?" Regarding circumcision's place in the Jewish tradition, Crowe told his followers that "... The Mayans had ceremonial acts too." And with a direct nod to a famous pal he added, "I love my Jewish friends, I love the apples and the honey and the funny little hats but stop cutting yr babies @eliroth" -- a comment that prompted actor/director Eli Roth to jokingly reply, "You didn't seem to be complaining when I was recutting you this afternoon."

Crowe -- who in the midst of it all also managed to work in a plug for reproductive choice -- ended his tirade with a bang, by stating that "I will always stand for the perfection of babies, i will always believe in God, not man’s interpretation of what God requires" and that "if u feel it is yr right 2 cut things off yr babies please unfollow and f**k off, I'll take attentive parenting over barbarism."

Yet in the harsh light of hindsight, a whole heap of backlash, and who knows, maybe a little more clarity of thought than when he'd originally been posting, Crowe deleted the offending tweets and issued an apologetic message. "I have a deep and abiding love for all people of all nationalities," he wrote Friday. " I'm very sorry that I have said things on here that have caused distress. My personal beliefs aside I realize that some will interpret this debate as me mocking the rituals and traditions of others. I am very sorry."

Yet as days passed, the controversy -- and the public pondering both in the media and the Twittersphere over whether Crowe's remarks indicate anti-Semitism -- refused to go away. Out of context, his remarks about hats and honey seem as dismissive as his comparison of Jewish tradition to Mayan blood ritual seem ignorant. But Eli Roth himself, who is writing and producing  Crowe's forthcoming "The Man With the Iron Fists," seems to have taken his friend's remarks in stride. "We are FRIENDS. Friends joke and tease each other," he tweeted, adding, "One of the nicest people I have ever been lucky enough to meet and work with. AND RESPECTFUL OF ALL RELIGIONS."

It's entirely possible to respect another's religion while disagreeing with its practices. And it's likewise all too easy to say something as a joke to a friend that sounds entirely wrong when it's addressed to a large group of individuals. Crowe's goofy comment to Roth was likely, in his mind, just a snap to a buddy. That's the thing about the medium: It can create the illusion of intimate conversation when in fact you're broadcasting to the world.

However little offense he may have meant to give -- or his friend may have taken -- Crowe does seem to have learned a little something this week about the power of social media. It can, in its better moments, make a person consider other perspectives. And the same words, in different contexts, can be used to persuade, to hurt, to misinform, or to make amends. Whatever you think about hot button issues like circumcision, it's encouraging when we can occasionally stop shouting our own opinions at each other and simply consider how we sound, and take in what others have to say. Who'd have thought that Russell Crowe, of all the random, temperamental people in the world, would be the type to grok that so swiftly?

"This is a great forum for communication," he graciously wrote this weekend. "I, like any human have my opinions and you all have yours, thank you for trusting me with them." Whether you agree with his views or not, you've got to give the guy credit for being able to know when to apologize, and how to listen. In the morass of Twitter wars and flames that can make the Net feel like a cesspool, Crowe, it turns out,  is anything but barbaric.