Targeting public sector unions is bad enough -- but craft brewers? Does the state have no shame? 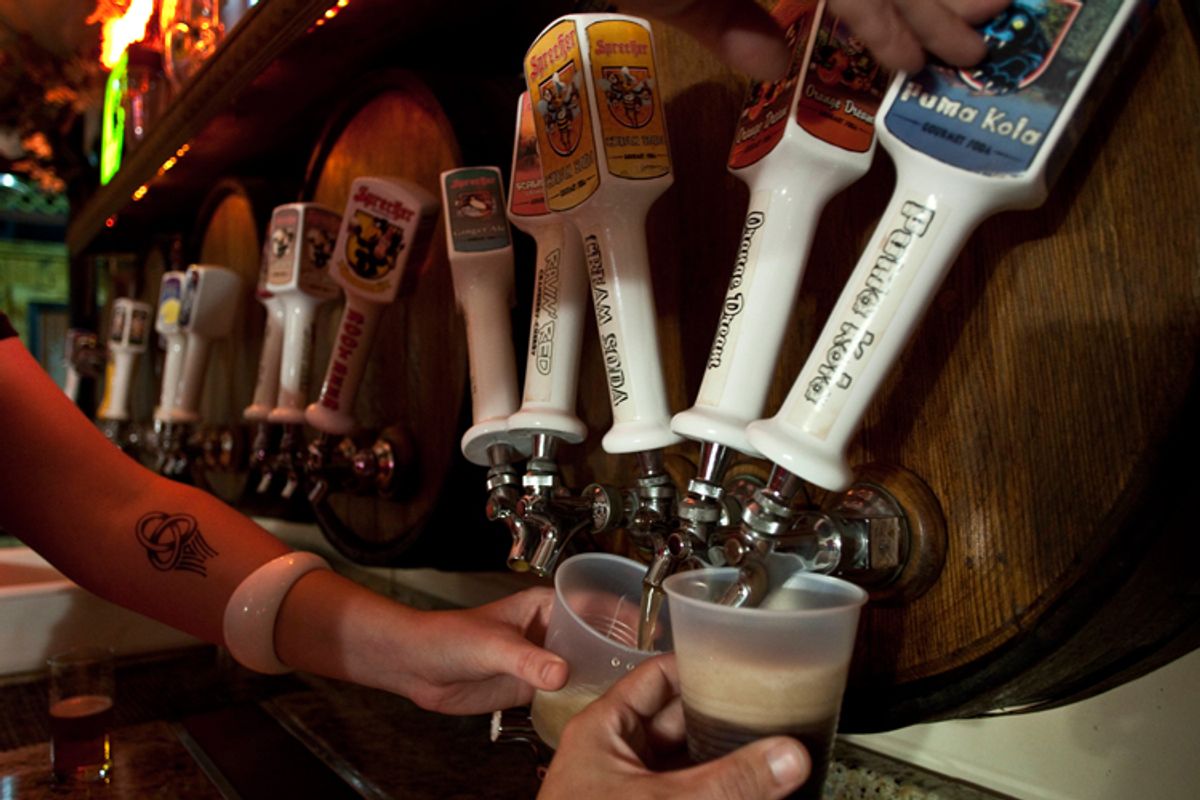 Beer being poured during a tour of Sprecher Brewery in Glendale, Wis.
--

Could Wisconsin Gov. Scott Walker really be waging war against craft brewers? According to a group of highly vocal small brewers in Wisconsin, a piece of legislation backed by the mega-brewer MillerCoors and approved last week by the state Legislature's Joint Finance Committee will unfairly restrict the ability of small craft breweries to operate their own businesses. Walker, say the critics, is selling out the little guy in favor of an out-of-state corporation that contributed $22,750 to his election campaign.

Walker's list of legislative priorities is famous for its radical realization of a utopian hard right agenda -- lower taxes for the corporate sector, a crackdown on public sector unions, tighter limits on voting eligibility, easier privatization of state-owned assets, school vouchers, looser gun control, and tighter restrictions on abortion. So if you happen to be a beer-loving liberal hooked on microbrews, I'm sure it wouldn't be a stretch to believe that Gov. Walker has a plan to force you to drink Coors Light until you puke.

But it also seems like a highly risky strategy. Forget about Wisconsin's glorious labor history. Wisconsin's love affair with beer dates back to the 1830s, when German immigrants brought their lager-loving tastes with them and ended up making Milwaukee into the beer capital of the United States. You simply do not mess with Wisconsin and beer. The entire beer-drinking United States owes Wisconsin a huge debt of gratitude: A Wisconsin senator, John Blaine, introduced the amendment that repealed Prohibition!

According to a summary provided by ThinkProgress on Friday, the big players in Wisconsin's beer industry, which includes MillerCoors, the Wisconsin Beer Distributors Association, the Tavern League of Wisconsin and the Wisconsin Grocers Association, are claiming that the law, which will prevent any brewer from owning a wholesale distributor, is intended to prevent another monolithic producer of watery pap, Anheuser Bush InBev, from swooping into Wisconsin and buying up distributors and creating its own local monopoly. But the law also restricts brewers from having more than one retail license to sell beer, which seems to mean a small micro-brewer would not be allowed to run more than one brew-pub to market and sell its own product.

ThinkProgress went even further, declaring that "Under the provision, it would be illegal, for instance, for a small brewer located near a restaurant to walk next door to deliver a case of beer. They'll have to hire a middle man to do it instead."

But that doesn't seem to be true. Under the law, brewers who produce under 300,000 barrels are allowed to self-distribute.

What is true, however, is that nationally, the craft beer segment of the beer industry is continuing to register strong year-on-year sales growth even as the overall market shrinks -- down 1 percent in 2010 after an even larger drop in 2009. Right now, craft beers only add up to about 5 percent of the Wisconsin beer market, but in the long run, taste and diversity seem sure to threaten an ever bigger chunk of the dollars currently spent on Bud Light and Miller Lite. If a group of small Wisconsin brewers wanted to get together and run their own wholesale distributor in order to compete more effectively with the big boys, the new law would prevent them from doing so.

The craft brewers are angry because they say they were not consulted before the law was sneaked through the Legislature. And it does seem odd that a governor who makes such a big deal of supporting small businesses would back legislation that restricts them from getting bigger, and potentially restricts Wisconsin beer drinkers from full access to the best brews available. What ever happened to the free market?  But blaming this particular piece of legislative maneuvering solely on Walker seems misplaced. The Joint Finance Committee voted 14-2 to approve the legislation -- only one Democrat and one Republican opposed it. Apparently, in Wisconsin, when MillerCoors talks, everybody listens.

Beer How The World Works Wisconsin