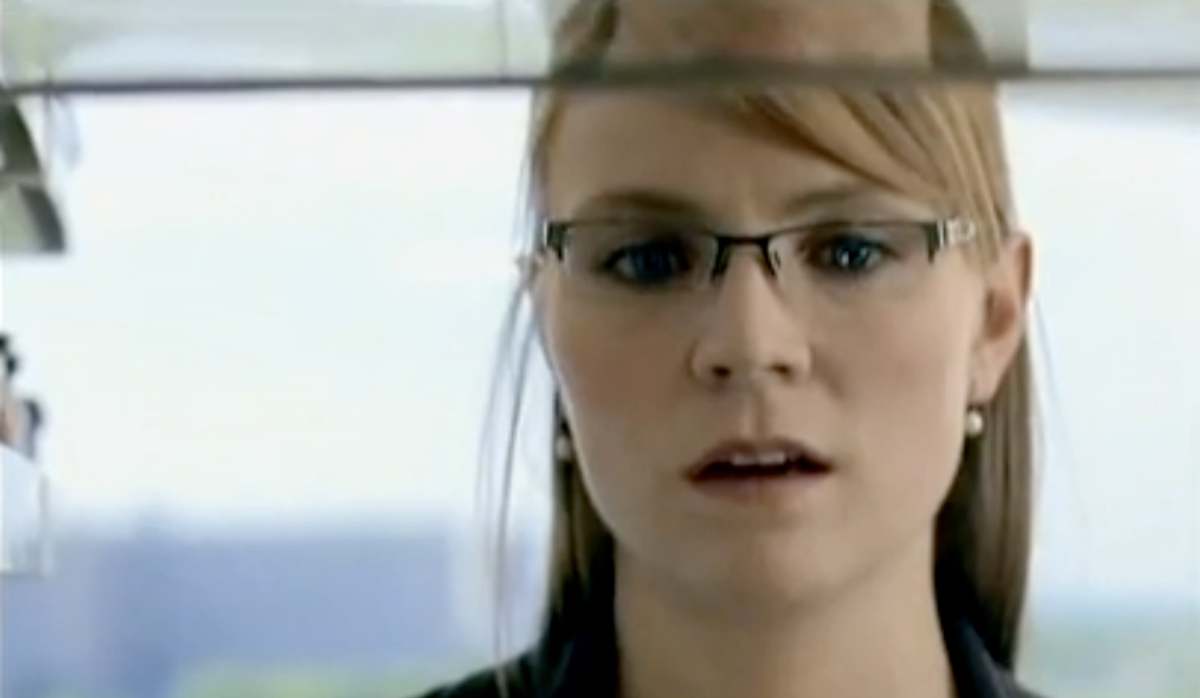 The slender woman looks with concern into the office refrigerator, staring down the enemy. "Oh, cheesecake," she sighs to herself. And then the recrimination and self-doubt kick in. "OK. What if I had just a small slice? I was good today, I deserve it! Or, I could have a medium slice and some celery sticks and they would cancel each other out, right? Or, OK, I could have one large slice and jog in place as I eat it. Or, OK, how about one large slice while jogging in place followed by eight celery…" Fortunately, it's at this point that her obsessive internal math is interrupted by an equally svelte colleague who coos, "Mmmm, raspberry cheesecake. I've been thinking about this all day." Does she then pull out the cake and enjoy a slice? Don't be silly – these are women we're talking about here. No, she reaches for a cheesecake flavored Yoplait, prompting her colleague to admiringly note, "Wow, you've lost weight," and grab her own carton of artificially sweetened yogurt. Whew. Crisis averted. Guess the men and fat chicks in the office can have that cheesecake now.

The first time I saw that ad, I thought immediately how much it reminded me of a mom I used to know, who I long suspected had an eating disorder. She'd talk constantly of how the kids never "let" her get a moment to eat, and when we went out together, she'd all but beg me to be "bad" and order dessert, which she would longingly watch me consume. Apparently, that Yoplait ad reminded a lot of other people of someone they knew or were – and now the National Eating Disorders Association has convinced General Mills to pull the campaign.

The company's v.p. of corporate communications told Huffington Post Wednesday that the idea that ad was promoting eating disorders "had never occurred to anyone, and no one raised the point. We aren't sure that everyone saw the ad that way, but if anyone did, that was not our intent and is cause for concern. We thought it best to take it down."

So what's more stunning: that an ad in which two slim women work out their food issues with cartons of artificially flavored treats made it to the air, or the news that nobody, at any point in the creative process, said, "Hey, doesn't this sound messed up?" That says a lot about how deeply ingrained that kind of dysfunctional thinking is; it's assumed that women, even women who clearly don't have a weight problem, would anguish over a slice of cheesecake, would careen from Restriction Village to what's looking like Binge Town, without pausing to ask themselves something really crazy like, "Am I hungry?"

That's why the ad isn't just offensive to anyone who has had an eating disorder or cared about someone who has. It imposes the notion of sin on one's eating habits, with the implication that depriving oneself of cheesecake is "good." Lynn Grefe, president and CEO of NEDA, told the Huffington Post that "To see this behavior in a commercial tells people with eating disorders, see, it's even on TV. It's OK and normal for my head to go through all these mental exercises."

It's a sign of progress that General Mills has pulled the Yoplait spots. It does, however, still offer a "2 week tune-up" diet on its website, one  that promises "it's easy" to "replace breakfast and lunch with a Yoplait Light, a grain and a fruit." Suggested grains, by the way, include General Mills' own sugary, salty Cheerios and Nature Valley Granola Bars.

I'm not endorsing a steady diet of dessert. Rising rates of obesity have plunged us into the throes of a serious public health crisis, one that is targeting women with rising rates of stroke and heart disease, and contributing to our now shortened life expectancies. But here's a thought: Maybe both obesity and eating disorders wouldn't be quite so big a problem if we weren't constantly being peddled these maddening notions of virtue and reward. Maybe when we embrace regular physical activity and learn to trust our own hunger cues, we don't need to portion out cups of Cheerios or 100 calorie ersatz treats dolled up in the guise of something super good for you. Maybe we don't need General Mills to make unhealthy thoughts seem like desirable behavior. And a raspberry cheesecake is a terrible thing to waste.