"It's Always Sunny" star gets fat -- for laughs

Rob McElhenney gained 50 pounds to become funnier. What would happen if a woman did the same? 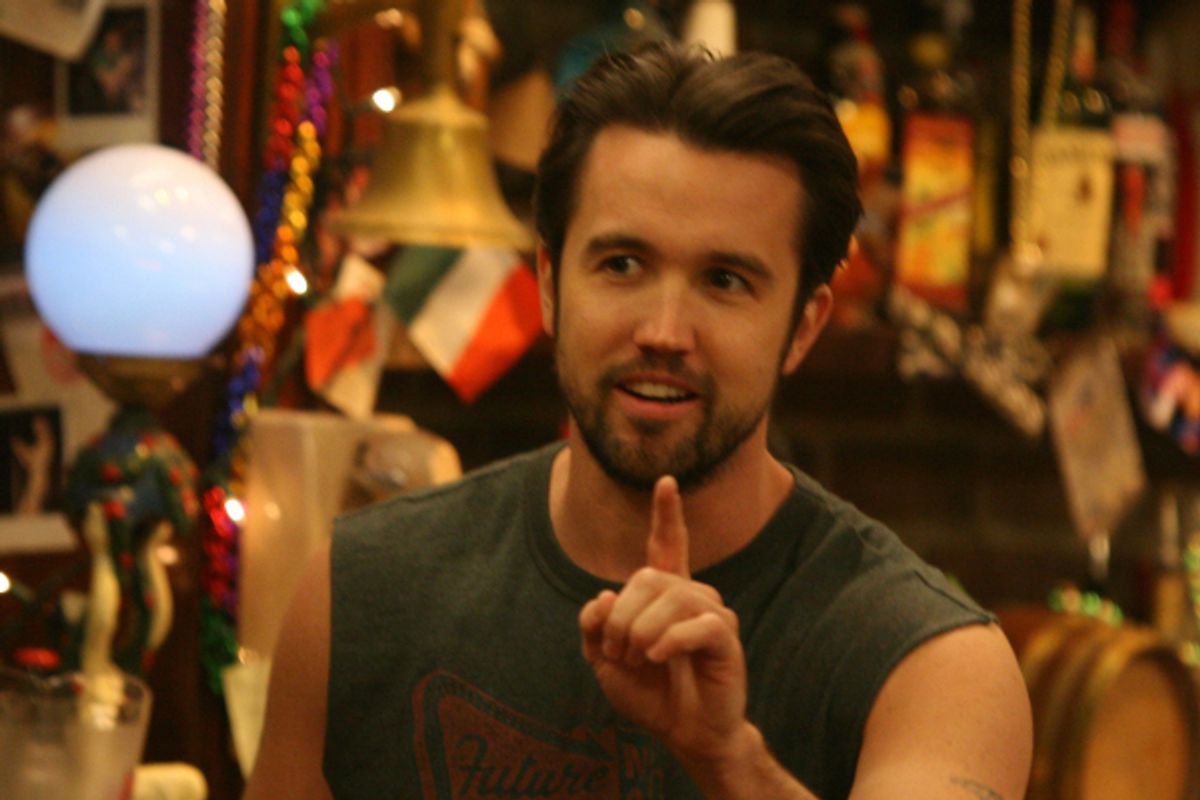 When your sitcom has dealt with racism, crack addiction, gay marriage, and abortion, when it regularly throws around words like "retarded," you don't expect it to be PC. But the ribald, frequently entertaining "It's Always Sunny In Philadelphia" is now apparently going even further for its seventh season and busting yet another taboo – getting fat. Well, not the whole cast. Rob McElhenney, who plays Mac, has allegedly beefed the hell up over the summer, and is ready to let his cocky character walk on the portly side.

In a feature for Screen Junkies this week, its stars promised "a darker season" featuring such comedic horror fodder as "a realistic version of 'Pretty Woman'" and a guest spot from Kings of Leon. But the real shudders seem to be reserved for McElhenney. The actor, who is married to his "Sunny" costar Kaitlin Olson and has a nine month-old son, could in fact be experiencing some of that new dad padding that kicks in when you're living on 20 minute naps and whatever hasn't gone rancid in the fridge. But he claims he took on the extra girth "for the sheer comedy of playing his character as a fat guy." His costar Charlie Day told Screen Junkies, "It’s been disgusting to watch him go through with this adventure. We were a little on the fence about it for his own personal health and safety, but it has definitely made Mac a lot funnier." And McElhenney tweeted Thursday that "I've eaten so much grease I don't cast a shadow any more."

Ah, fat as a source of comic relief. It's been done plenty before, usually as a sign of a character's "loser" period. Think Barney Stinson's pathetic letting himself go in "How I Met Your Mother," or Monica's high school nerdiness in "Friends." And what would cinema be without The Klumps, Big Momma, or Shallow Hal? That was rhetorical.

Whatever the cause of McElhenney's apparent inflation, it's a bold move to use a real weight gain as a comedic plotline. It's undeniable that pretty much everything about our flatulent, jiggly, pimple prone, erectile dysfunctional bodies is ripe for comedy. It's likewise possible to acknowledge weight and still be funny – case in point, the scene-stealingly wonderful Melissa McCarthy. But the playing field is far from even. And yes, here comes the humorless feminist part of the story you've been itching to write that scathing rebuttal to.

Even with Gwyneth Paltrow and Southwest Airlines out there fat shaming the menfolk, the truth remains that a female celebrity would never in a bajillion years get away with cavalierly packing on even five real pounds without a big public stink over it. Earlier this week, the seriously buff Fergie told Allure "People think that I'm pregnant sometimes because my weight fluctuates," because when she dared to perform at the Superbowl with a not entirely concave belly, it was widely rumored she must be knocked up. And on Friday, the Daily Mail ripped Britney Spears for daring to sport a "far from flat" midriff for the opening night of her tour and noting "perhaps Britney should have spent a little longer in the gym." All a woman needs to do is be photographed from an unflattering angle, and it's practically a tragedy.

"It's Always Sunny" does a reliable job of making heartlessness really funny, and within the context of the show, who knows how the weight gain plot point will go? It might be brilliant. But let's just keep in mind that in the real world, when a few extra pounds means something to criticize, something to point at, something  "disgusting," and something to laugh not with but at, somehow, it's just not so hilarious.