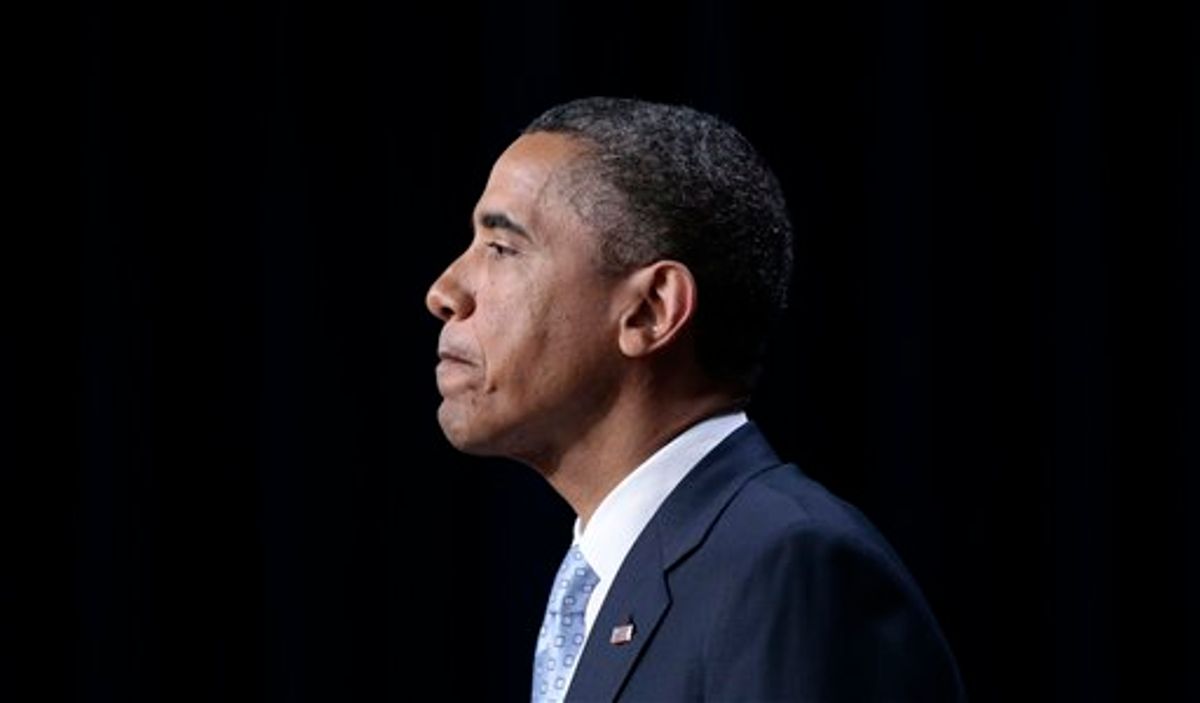 President Barack Obama speaks as he hosts military fathers and their children for a screening of Disney/Pixar movie 'Cars 2' in the South Court Auditorium of the Eisenhower Executive Office Building on the White House complex, Wednesday, June 15, 2011. (AP Photo/Pablo Martinez Monsivais) (AP)
--

The growing controversy over President Obama's illegal waging of war in Libya got much bigger last night with Charlie Savage's New York Times scoop.  He reveals that top administration lawyers --  Attorney General Eric Holder, OLC Chief Caroline Krass, and DoD General Counsel Jeh Johnson -- all told Obama that his latest, widely panned excuse for waging war without Congressional approval (that it does not rise to the level of "hostilities" under the War Powers Resolution (WPR)) was invalid and that such authorization was legally required after 60 days: itself a generous intepretation of the President's war powers.  But Obama rejected those views and (with the support of administration lawyers in lesser positions:  his White House counsel and long-time political operative Robert Bauer and State Department "legal adviser" Harold Koh) publicly claimed that the WPR does not apply to Libya.

As Savage notes, it is, in particular, "extraordinarily rare" for a President "to override the legal conclusions of the Office of Legal Counsel and to act in a manner that is contrary to its advice."  Just imagine if George Bush had waged a war that his own Attorney General, OLC Chief, and DoD General Counsel all insisted was illegal (and did so by pointing to the fact that his White House counsel Alberto Gonzales and a legal adviser at State agreed with him).  One need not imagine this, though, because there is very telling actual parallel to this lawless episode:

In 2007, former Bush Deputy Attorney General James Comey testified to the Senate Judiciary Committee about an amazing event.  Bush's then-Attorney General, Alberto Gonzales, had blocked Comey from testifying for two years -- once Democrats took over Congress, that obstruction was no longer possible -- and it quickly became apparent why Gonzales was so desperate to suppress these events.

Comey explained that, in 2004, shortly after he became Deputy AG, he reviewed the NSA eavesdropping program Bush had ordered back in 2001 and concluded it was illegal.  Other top administration lawyers -- including Attorney General John Ashcroft and OLC Chief Jack Goldsmith -- agreed with Comey, and told the White House they would no longer certify the program's legality.  It was then that Bush dispatched Gonzales and Andy Card to Ashcroft's hospital room to try to extract an approval from the very sick Attorney General, but, from his sickbed, Ashcroft refused to overrule Comey.

Bush decided to reject the legal conclusions of his top lawyers and ordered the NSA eavesdropping program to continue anyway, even though he had been told it was illegal (like Obama now, Bush pointed to the fact that his own White House counsel (Gonzales), along with Dick Cheney's top lawyer, David Addington, agreed the NSA program was legal).  In response, Ashcroft, Comey, Goldsmith, and FBI Director Robert Mueller all threatened to resign en masse if Bush continued with this illegal spying, and Bush -- wanting to avoid that kind of scandal in an election year -- agreed to "re-fashion" the program into something those DOJ lawyers could approve (the "re-fashioned" program was the still-illegal NSA program revealed in 2005 by The New York Times; to date, we still do not know what Bush was doing before that that was so illegal as to prompt resignation threats from these right-wing lawyers).

That George Bush would knowingly order an eavesdropping program to continue which his own top lawyers were telling him was illegal was, of course, a major controversy, at least in many progressive circles.  Now we have Barack Obama not merely eavesdropping in a way that his own top lawyers are telling him is illegal, but waging war in that manner (though, notably, there is no indication that these Obama lawyers have the situational integrity those Bush lawyers had [and which Archibald Cox, Eliot Richardson and William Ruckelshaus had before them] by threatening to resign if the lawlessness continues).

There's another significant and telling parallel between Obama's illegal war and the Bush eavesdropping scandal.  One of the questions frequently asked about the NSA scandal was why Bush and Cheney decided to eavesdrop in violation of the law rather than having Congress approve their program; in the wake of 9/11, both parties in Congress were as subservient as could be, and would have offered zero resistance to requests by the administration for increased eavesdropping powers (the same question was asked of Bush's refusal to seek Congressional approval for the detention and military commissions regime at Guantanamo).  The answer to that question ultimately became clear:  they did not want to seek Congressional approval, even though they easily could have obtained it, because they wanted to establish the "principle" that the President is omnipotent in these areas and needs nobody's permission (neither from Congress nor the courts) to do what the President wants.

The exact same question emerges here.  From the start, the GOP leadership was vocally supportive of the war in Libya.  In fact, John McCain was demanding the war begin before Obama even committed to it, while Lindsey Graham was urging the war be waged more aggressively.  On the eve of the war, GOP House Speaker John Boehner -- while calling on Obama to be clear about the mission -- issued a statement declaring:  "The United States has a moral obligation to stand with those who seek freedom from oppression and self-government for their people. It's unacceptable and outrageous for Qadhafi to attack his own people, and the violence must stop."

Indeed, Obama's most valuable allies on Libya from the start (as is true for his war in Afghanistan and other Terrorism policies)  have been Republican leaders.  As The Washington Post reported in early June, Boehner -- acting as an "unlikely ally" of Obama -- introduced a meaningless resolution as a means of preventing passage of a more meaningful anti-Libya resolution: namely, Rep. Kucinich's bill to compel withdrawal within 15 days.  Moreover, most of the GOP House leadership just this week voted (along with Democratic leaders) against Brad Sherman's amendment to cut off funds for Libya if Obama refuses to comply with the WPR.  Right-wing support for Obama's Libya policy continues to be strong, as yesterday Bill Kristol and other assorted neocons issued a letter urging steadfast support for the war.

It should go without saying that even if the GOP had refused to support the war, that would not remotely be an excuse for violating the law and waging it without Congressional approval.  Obviously, the law (and the Constitution) does not require Congressional approval for wars only where Congress favors the wars, but in all instances (it should also go without saying that a belief in the morality of this war is not an excuse for waging it illegally, any more than Bush followers' claims that warrantless eavesdropping and torture were beneficial excused their illegality).  All that aside, what is undeniable is that Obama could have easily obtained Congressional approval for this war -- just as Bush could have for his warrantless eavesdropping program -- but consciously chose not to, even to the point of acting contrary to his own lawyers' conclusions about what is illegal.

Other than the same hubris -- and a desire to establish his power to act without constraints -- it's very hard to see what motivated this behavior.  Whatever the motives are, it's clear that he's waging an illegal war, as his own Attorney General, OLC Chief and DoD General Counsel have told him.

For more on the absurdity and lawlessness of Obama's excuse-making in refusing to obtain Congressional approval, see The Atlantic's James Fallows and The New Yorker's Amy Davidson.

UPDATE:  Also in The New York Times this morning, Scott Shane describes the still-escalating war on whistleblowers being waged by the Obama administration, including the press-freedom-threatening prosecution of WikiLeaks.  As sysprog astutely observes in comments: "if the Administration and Congress are successful in squelching the publication of secrets, that may prevent future scoops like today's by Charlie Savage."

That, of course, is precisely the point of this war: to suffocate one of the only remaining avenues for learning what the government actually does, as opposed to what they want the public to believe they do.  As Thomas Jefferson long ago observed:  avenues of disclosure are "the first shut up by those who fear the investigation of their actions."