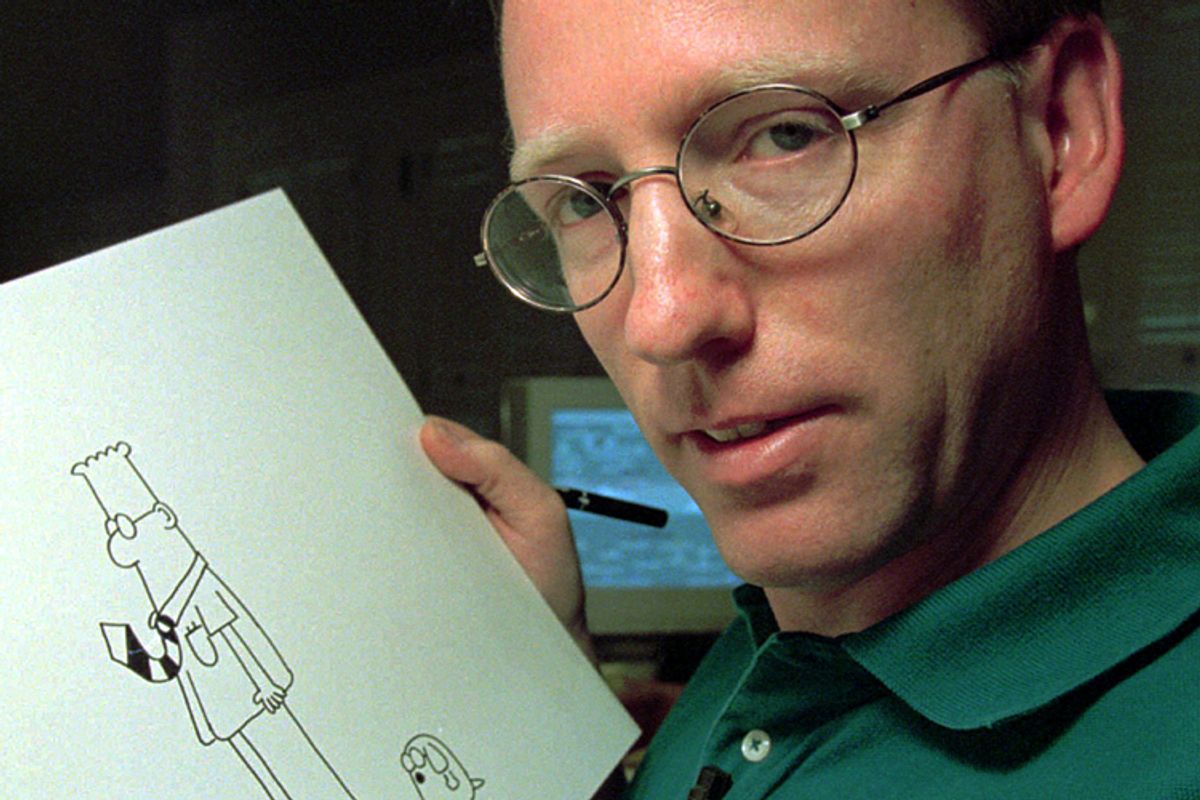 It's been a long time since the name Scott Adams was associated with wit, subtlety, reason or honesty. But the Dilbert creator, men's rights blowhard and world's greatest imaginary fan of his own "certified genius" proved recently that as gross as you may already think Scott Adams is, he's prepared to get even grosser.

In an unfortunately named blog post titled "Pegs and Holes," Adams notes that of late "Powerful men have been behaving badly, e.g. tweeting, raping, cheating, and being offensive to just about everyone in the entire world." Could this, you ask, possibly be the beginning of a critical line of new thinking about the abuse of power? Adams even boldly declares that "Obviously we shouldn't blame the victims." That's mighty big of you, sir!

Then he goes spectacularly bonkers. "Society is organized in such a way that the natural instincts of men are shameful and criminal while the natural instincts of women are mostly legal and acceptable," he continues, explaining that civilization "has evolved to keep males in a state of continuous unfulfilled urges, more commonly known as unhappiness ... society is organized as a virtual prison for men's natural desires." He then fancifully concocts a futuristic scenario involving chemical castration, oxytocin drugs, and artificial insemination to bring about "no rape, fewer divorces, stronger friendships, and a lot of other advantages," a "society of huggers."

There are two important rebuttals to be made here. First and foremost: thanks for all the gags about casual Friday, but Scott Adams sounds like he's lost his freaking marbles. And since Adams has complained in recent months of his words being taken out of context, please, by all means, go and read the whole breathtakingly strange post in its bizarre entirety.

Second, as a colleague pointed out recently, remember the old sexist argument that women weren't qualified for positions of power because their lady hormones would make them act all crazy and emotional? Remember when we were the irrational, out of control ones and men, with their cooler man heads, were assumed innately better suited to run the world? You don't hear that one so much anymore, do you?

Adams, in contrast, represents a different extreme -- and extremely lunkheaded -- version of an alternate line of sexist thought. And in his own clumsy way, he articulates something many of us have heard repeatedly over the course of our lives, an argument that boils down to boys being boys. Left to their own devices, men apparently would just go about raping and pillaging all the livelong day, with occasional breaks for grilling and watching ESPN. They're just being men, and doggone it if this pesky thing called civilization keeps getting in the way.

It bears repeating, as I do every time I wind up writing about sex and gender, that no duh, men and women are different, both culturally and biologically. By virtue of our hormones, body mass and cultural conditioning, we can make generalizations about behavior based on gender, and we can give the human sex drive its due as a driving force to be reckoned with.

That does not now, nor will it ever, presume that men are natural born rapists, or that to behave in an unrapey manner leads to "unfulfilled urges" and "unhappiness." Those kind of dumb statements do a vast disservice not only to women, who are once again shunted into the unasked for role of moral guardians based on our ostensibly more restrained "natural instincts," but it deeply insults the vast majority of men, who somehow manage to get through life without being sex offenders. I'd wager further that the world is full of men who can distinguish between sexual urges and violent, aggressive ones, and that for them, forgoing rape and harassment is not a great source of unhappiness or even difficulty.

The old "all men are animals" trope is certainly a convenient way of identifying yourself as one, but speak for yourself, pal. And if you truly believe the problem is that men are just square pegs in a world of round holes, maybe you should consider that men are not mere slaves to their pegs, and that women are a whole lot more than a pack of castrating holes.