After cast member Ryan Dunn dies in a possibly drunk crash, Roger Ebert sets off a firestorm on Twitter 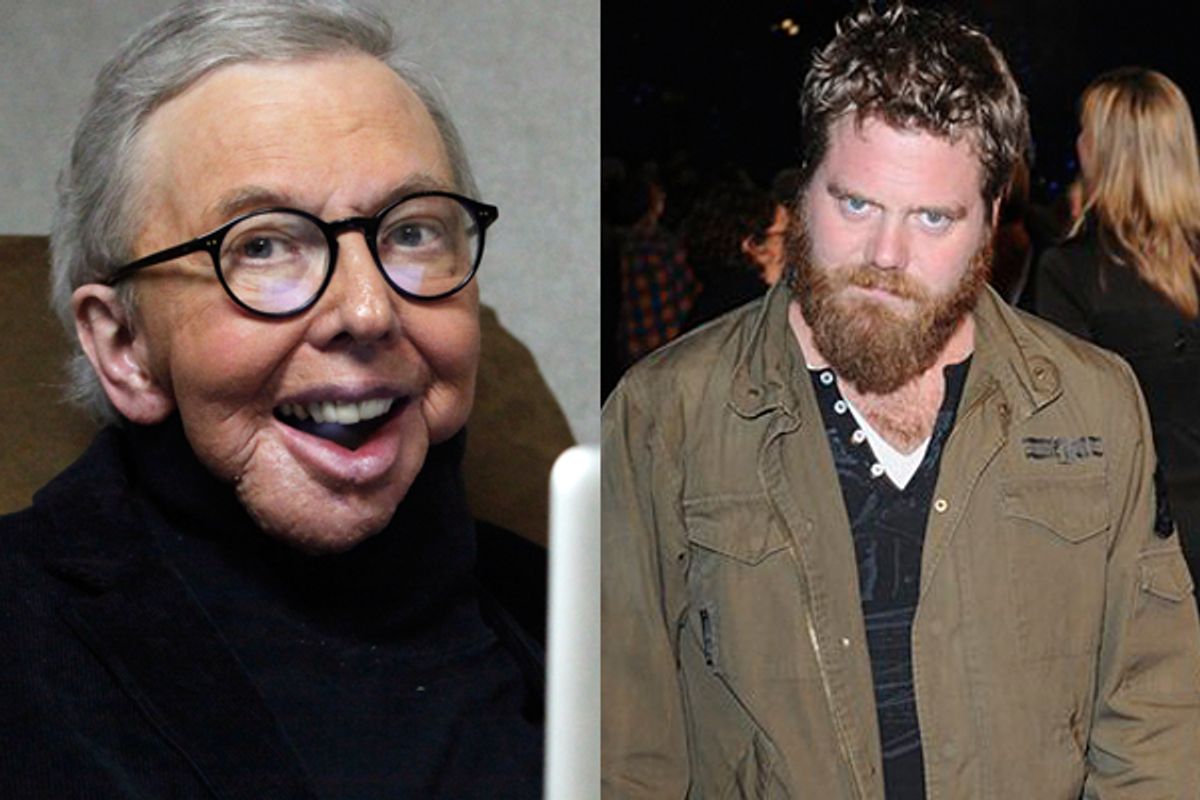 What do you say when a Jackass dies? When Ryan Dunn and a passenger in his car were killed in a fiery crash in the early hours of Monday morning, fans, friends and a few unlikely sources took to the Net to express their reactions -- and turned an untimely death into a war of words.

The 34-year-old Dunn was best known as part of MTV's durable "Jackass" franchise, where he distinguished himself among a distinguished group of daredevils for his eagerness to dive headlong into a pool of raw sewage or stuff a toy up his rectum. Just a week ago, his new stunt-oriented series "Proving Ground" -- "Where Trial Meets Error" -- debuted on G4. But Sunday night, Dunn went out with friends to a Philadelphia area bar called Barnaby's of America. He tweeted a photograph of himself and his pals holding what appear to be beers (the photo has since been taken down). At some point, he and 30-year-old Zachary Hartwell, a "Jackass 2" production assistant and a stunt driver, drove off into the night in Dunn's Porsche. The preliminary police report said that "speed may have been a contributing factor to the accident."

It may be some time before the results of Dunn's autopsy are revealed. TMZ reports that witnesses at the bar claim Dunn consumed "at least 3 beers and 3 shots," while an employee of Barnaby's says he "didn't seem intoxicated." And the sadness over Dunn's untimely death, combined with the speculation over the suspicious circumstances of it, have made for a field day of wildly different reactions. Is this a time for horror at the tragedy of a life cut short, or outrage over what may have been a deadly act of recklessness? His "Jackass" costar Steve-O tweeted Monday, "I don't know what to say, except I love Ryan Dunn and I'm really going to miss him." But at the other end of the spectrum, Roger Ebert wrote tersely, "Friends don't let Jackasses drink and drive."

Ebert's comment soon set off an explosion of responses, mostly negative, including a post from the newly nicer Perez Hilton, who called it "extremely insensitive" and that "there's no reason - especially RIGHT NOW - that anyone should be pointing fingers or poking fun at a truly tragic situation." When Perez Hilton is calling you insensitive, dude, you've transgressed.

Ebert, meanwhile, shot back Monday that "Perez Hilton's readers agree with me and not with Perez about my tweet on Ryan Dunn. He drank, he drove, 2 people died." And Dunn's friend and fellow Jackass Bam Margera weighed in angrily: "I just lost my best friend, I have been crying hysterical for a full day and piece of shit roger ebert has the gall to put in his 2 cents…About a jackass drunk driving and his is one, fuck you! Millions of people are crying right now, shut your fat fucking mouth!" Oddly, Ebert claims today Facebook has now seen fit to remove his page, for "violating terms of use."

I'll own up to being a fan of both Roger Ebert and "Jackass," and as such, there isn't an aspect of the story that doesn't seem utterly sad and senseless. That Dunn was a daredevil for a living doesn't necessarily mean that he died as he lived. He didn't lose his life in service of a hilarious bit. There is evidence -- but at this point it's too soon to say with certainty -- that drinking contributed not just to his death but to the death of another human being. It'd be crazy and irresponsible not to point out that aspect of the story, and the horrific consequences of drinking and driving, especially considering that Dunn had a prior DUI. And it's hard to imagine that the genial, self-deprecating Dunn himself would have taken great offense at Ebert's post; the word "jackass" was, after all, an integral part of the guy's brand. Likewise, whatever was going on in Dunn's bloodstream, the simple maxim that friends don't let friends drive drunk is true. Is it insensitive to point out that it's better to appear a scold or a buttinsky in the parking lot of a bar than lose a pair of lives on a Pennsylvania turnpike?

Roger Ebert, a famously recovering alcoholic, brings his own issues to the table here, and his perspective is far from unbiased. With sobriety can come a whole lot of self-righteousness, and a person who understands drinking as something one does exclusively to get drunk likely wouldn't even consider the chance that a guy could go to a bar, have a beer, and have the brakes go out on his Porsche. When I was out recently with a person in recovery, he referred to the people "getting wasted" around us, as if anyone holding a drink was automatically on a bender. Life is just not that clear-cut.

The dust-up surrounding Dunn's death can be viewed as part of that unique, modern public ritual of assuming that because something has happened somewhere in the world, one has an obligation to comment on it. It shows how viscerally these issues around drinking and risk-taking behavior touch us, how deeply moved we can feel when someone who played the buffoon for our delight dies much too soon, and how accusatory and defensive we can be when there is the possibility of blame to go around. I try to imagine how I'd feel if that were someone I truly loved in the passenger seat. Or if it were the driver. Would I mourn him any less because he may have been intoxicated? I'd be both furious and grief-stricken; they're not mutually exclusive. But would I be flippant about it, as Ebert surely was?

In the midst of strong emotion, finger pointing and flat-out rage, "Jackass" star Johnny Knoxville tweeted simply yesterday that "Today I lost my brother Ryan Dunn. My heart goes out to his family and his beloved Angie. RIP Ryan, I love you buddy." And that's what we know for sure. Two people are dead. Their friends and family will never be the same. And even someone who takes a bruising for a living understands that at a moment like that, there's nothing to feel but pain.