Is Jennifer Aniston a "homewrecker"? 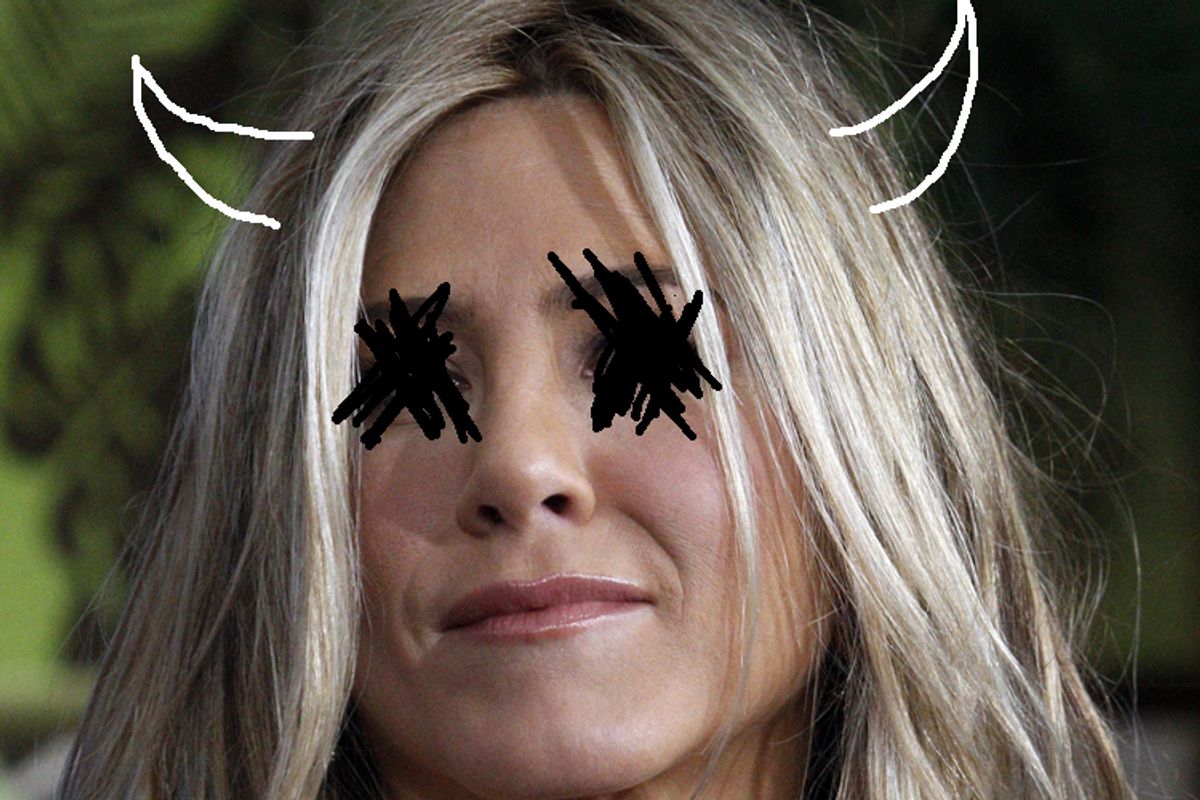 And in today's b.s. celebrity news headlines, we have a winner with Us Weekly's "How Jennifer Aniston Pulled an Angelina With Justin Theroux." You know, because Jen "Maneater" Aniston met Theroux on the set of "Wanderlust" and, according to reports, enticed him to break up with his live-in girlfriend of 14 years, Heidi Bivens. Now Aniston is being labeled a homewrecker, the "other woman" and a bunch of other derogatory terms for women whom non-single guys leave their significant others for. Funny how we have no word for the male equivalent of a homewrecker, isn't it? From the Us Weekly story:

"And, yes, the bitter irony -- Aniston's husband Brad Pitt infamously left her for Angelina Jolie six years ago after falling in love on set -- is lost on no one. 'It's amazing she would go for an attached guy after what happened to her' (says Biven insider)."

I'm sorry: I'm all for female solidarity and not stealing another lady's man, but how is this "amazing"? Jennifer got a divorce six years ago, and her only real statement when Angelina told the media how she fell in love with Brad while filming "Mr. and Mrs. Smith" (and while Brad was still married to Jen) was that it was "not cool." While I'm sure the divorce devastated Jennifer, it was the tabloids that have kept her in the role of the perpetual victim for over half a decade, as the poor woman who can't settle down and have kids because her husband ran off with that harlot/humanitarian. In reality, I doubt Aniston felt half as much self-pity as the average American did for her. But Theroux wasn't even married and the difference between "wife" and "girlfriend" is still a big commitment leap, and the term "homewrecker" is usually reserved for someone who breaks up a marriage or a family.

As someone who has been on both sides of this homewrecking scenario -- who watched her parents' marriage dissolve because of infidelity and later went on to sleep with a married man herself – I feel for both Aniston and Bivens. Yes, mainly for Bivens, because she just got dumped after a decade and a half for a much more famous woman. And unlike Aniston in 2005, no one is going to be keeping tabs on the spurned lover's various boyfriends for the next several years, wondering if she'll ever have a baby with John Mayer, or Vince Vaughn. If Bivens later finds herself seeing a non-single guy in any capacity, the papers won't ask if she should "know better than to come between a man and his longtime love" like they are doing with Aniston.

In that way, Bevin is probably luckier than Aniston, who just lost the nation's support as the hottest spinster in America. Then again, maybe after six years of being known as the "ex-Mrs Brad Pitt," an image change is just what the doctor ordered.