Don't hate the inflated, eye-popping spy farce because it's not profound or weepy! 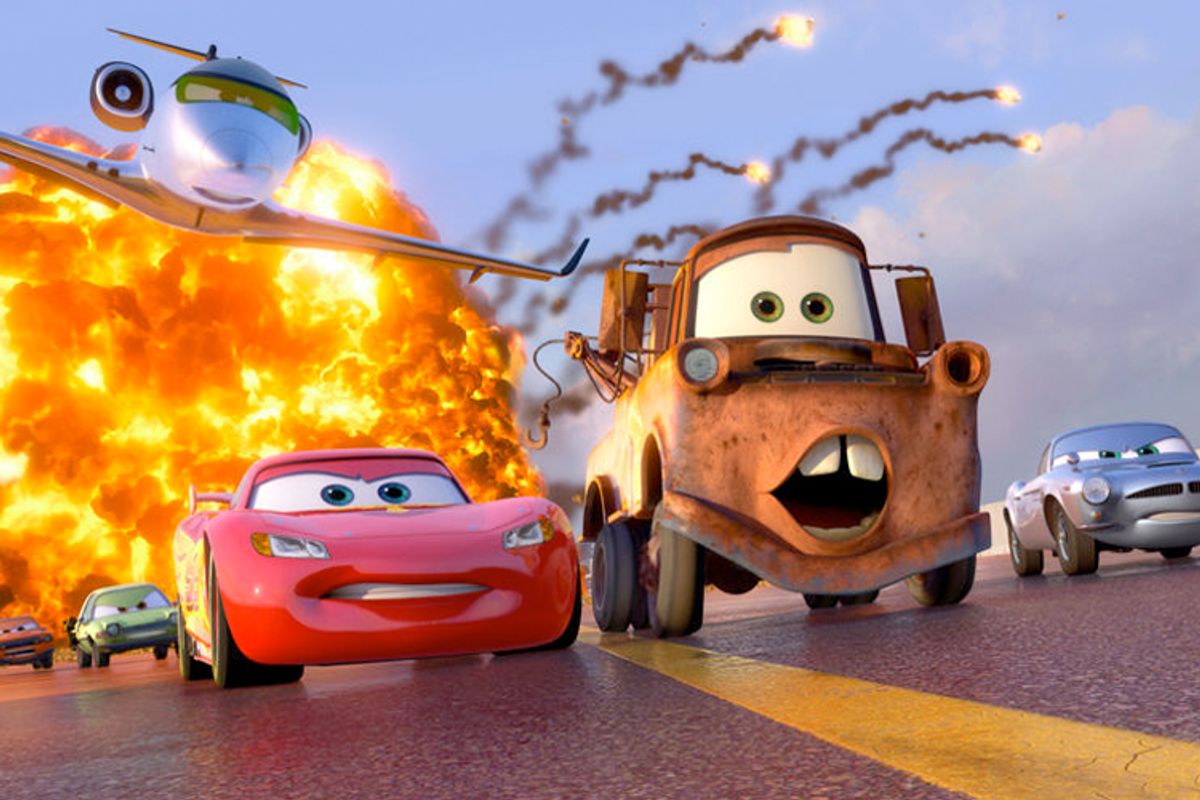 "Cars 2" might be a better James Bond film than five or six of the actual Bond films, and the fact that its hero is a bucktoothed, redneck tow truck without a hood does nothing to detract from its (admittedly modest) appeal. I get the feeling that a lot of critics are going to beat up on Pixar head John Lasseter's widely hyped sequel to the 2006 worldwide hit "Cars," and as Tow Mater himself might say, heck, opinions are like headlights, and everybody's entitled to at least one of 'em. No, "Cars 2" absolutely does not have the semi-adult wistfulness or the emotional depth of the last several Pixar releases. But it doesn't aspire to, and indicting it on the basis of being a fun, silly, kid-friendly summer popcorn entertainment that won't linger long in your memory seems like a category mistake.

I've already written, perhaps tiresomely, about the "Pixar problem," which in many people's eyes isn't a problem at all: The company's expensive Disney collaborations have skewed more and more toward a nostalgic or even tragic adult sensibility, especially as the generation who grew up with "Toy Story" moves into parenthood. Yet they aren't quite adult movies, even if "Up" and "Wall-E" came pretty darn close; they still have to have sufficient action, slapstick comedy and simple characterization to engage at least some younger viewers. There's nothing wrong with that combination, and the results speak for themselves, in terms of popular passion, critical response and marketplace success. But I can't help feeling that Pixar's films have been consistently overpraised, which may simply reflect the fact that I don't belong to the right micro-generational cohort, or that I'm a snob who prefers molasses-paced, Soviet-era art films. Where others see a moving masterpiece in "Toy Story 3," for example, I see an ingenious pastiche that mixes nostalgic thrill ride and mawkish emotional porn. (Oh, and hey: There's a "Toy Story" short that runs before "Cars 2." So get there on time!)

With something like the "Cars" franchise, you get the same problem in reverse. The 2006 original was a vastly more conventional kids' film, with a Mister Rogers-esque friendship lesson, a lot of silly gags and a bunch of animated NASCAR racing. My kids have seen lots of other and arguably much better movies, but that one remains their favorite by far, and across 30 or 40 partial viewings I've grown to appreciate the crystalline clarity of its animation and the lively characterizations of star race car Lightning McQueen (Owen Wilson), his loyal if unsophisticated pal Mater (voiced by the comic known as Larry the Cable Guy), Porsche-lawyer Sally (Bonnie Hunt) and grouchy racing legend Hudson Hornet (Paul Newman). It's almost certainly movie critics' least favorite Pixar film, and not coincidentally the one most embraced by audiences under age 10. (Is it cruel that Newman's last feature-film role was playing a 1950s automobile? He was probably OK with it. By the way, parents, you may want to warn younger viewers that Doc Hudson has moved on to the great speedway in the sky, since his absence is dealt with directly.)

"Cars 2" is undeniably an eye-popping, Pop Art-inflected spectacle, which swaps the Route 66 setting and simple storytelling of the first "Cars" for grandiose and dopey globetrotting espionage. We begin and end in Radiator Springs (where most of your kids' favorite vehicular supporting characters make brief appearances), but in between, McQueen and Mater visit Tokyo, a fictional port city in Italy and then London while dueling with an arrogant Formula One car named Francesco (John Turturro) for supremacy in something called the World Grand Prix. Even before that, we begin on the high seas, with one of those Bond-style opening action scenes starring British intelligence agent Finn McMissile (a first-rate Michael Caine impression done by, well, Michael Caine). Finn has widely been described as a 1960s Aston Martin akin to the one driven by Sean Connery in the early Bond films, but the Wall Street Journal's Jonathan Welsh appears to have him pinned down as a late 1950s Peerless GT, a British sports car known only to enthusiasts.

After an unfortunate and indeed uproariously silly men's room mishap in Tokyo -- see, cars do use toilets, sort of -- Finn and his comely sidekick Holley Shiftwell (Emily Mortimer) mistake Mater for a deep-deep-undercover CIA agent and, yeah, somewhat forced hilarity and heroism ensue. For adult viewers, much of the enjoyment to be found in "Cars 2" is technical, both in terms of the Pixar team's lavish and imaginative re-creations of these foreign locations and the hilarious and arcane collection of vintage vehicles: three-wheeled Citroëns, microscopic 1960s Fiats, even Yugos and several of the most dreaded 1970s American Motors models. This isn't great cinema, but your kids will have a great time and if you want to get wistful you can remember a time when people (maybe you!) actually drove Pacers and Gremlins on purpose. There's really no downside.