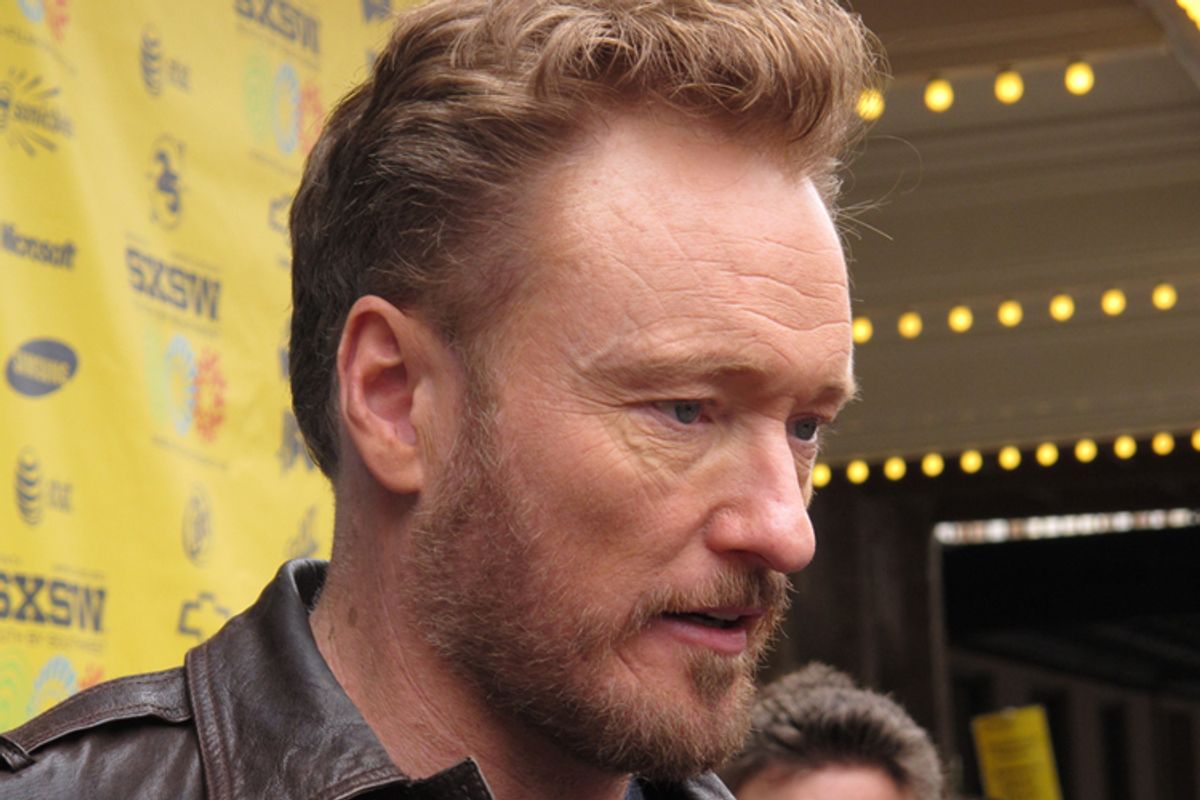 "I'm sick of people saying that I'm drunk with power! Or that I've lost perspective!" shouts Conan O'Brien at his sycophantic staff, during one of many moments of edgy backstage needling in Rodman Flender's documentary "Conan O'Brien Can't Stop." Yeah, it's a joke, of course. But it also represents a vein of uncomfortable humor that runs all the way through this fascinating film, a chronicle of O'Brien's "Legally Prohibited From Being Funny on Television" tour, which brought the comedian's traveling vaudeville act to 32 North American cities during his six-month, post-"Tonight Show" banishment from the small screen last year.

It's also a joke, I guess, when O'Brien later compares himself to Anne Frank, leading his assistant, Sona Movsesian, to gape at him in open-mouthed disbelief. He grumbles his acknowledgment that she's right, it may be going too far to compare being paid $45 million not to appear on TV with being killed by the Nazis, and you see a flicker of distaste or unhappiness move across his truculent expression. Like: Am I really this person now? Success in show business demands an obsessive, even maniacal drive, along with a diva-ish degree of self-regard and a projection of your own will onto the universe. It should be no surprise that O'Brien possesses all those qualities, despite a public persona based on his humility and upper-middle-class ordinariness. I think the guy is a talented and often funny TV performer, and I've got nothing against him as a person. Either bravely or stupidly, he allowed Flender total freedom to make a movie that simultaneously portrays him as a vulnerable human being and also as a massively entitled douchebag who's being eaten alive by his own contradictions.

If there's one belief that all Americans share -- Jew and Gentile, black and white, Kenyan-born Muslim socialists and normal people -- it's that one day we'll become celebrities and millionaires. "Conan O'Brien Can't Stop" may serve as partial inoculation against that desire, but if it winds up happening to you anyway, here's my advice: Don't let the documentary film crew into your house! And if you simply can't resist, at least stay off the couch, which is where O'Brien spends much of this film (both literally and figuratively), making pronouncements like: "I could be a genius, or I could be the biggest dick ever. Or both. I can't tell." Flender's title has obvious multiple meanings, but one of the biggest is that O'Brien can't stop running his damn mouth, to his own detriment.

Flender's film follows in the "direct cinema" tradition of legendary backstage documentaries like D.A. Pennebaker's "Dont Look Back" (about Bob Dylan in England) or the Maysles brothers' "Gimme Shelter" (about the Rolling Stones' infamous Altamont concert). It casts a cold eye at the sausage-making machinery behind the entertainment industry, and if the principal audience for "Conan O'Brien Can't Stop" is obviously the comedian's legions of fans, it's probably most interesting as a detached study of the workings of fame. We watch O'Brien and his staff tirelessly constructing their road show, a raucous blend of comedy sketches and mediocre folk-rock that feels like a way of reconstructing the star's ego by way of old-school showbiz bona fides. (Not sure the guy should quit his comedy gig for music, but my gosh, he's a dervish!) We see him irritably engaging hordes of fans in L.A. and New York, and groups of two or three people in Oregon and rural Alberta. In that last location, he meets a kid who's driven for hours across the prairie with a fake ID, who tells him, "I hope they don't Jew me out of getting into the show!" O'Brien calmly asks him what he just said, and the kid goes, "I mean, I hope they don't gyp me out of it!" (Marginally less toxic bigotry! Much better.)

Let me admit that I came to "Conan O'Brien Can't Stop" as a neutral in the great late-night war of 2009-2010. I mean, I've seen both O'Brien and Jay Leno on television, and many people I know have strong feelings about the perceived generational and cultural divide between them. But the fact that there were actual street demonstrations on both coasts around the question of who would host the "Tonight Show" (which seemed antique when Johnny Carson hosted it in the '80s) seems puzzling, although no more so, I guess, than setting fire to police cars because your team either won or lost the championship. What's clear from the film is that there's a massive, almost tribal demand for O'Brien's brand of slightly more upscale comedy (maybe less so for his rock-star stylings), and also that being that famous doesn't do wonders for anyone's personality.

There's a scene late in the movie that made me feel a little better about O'Brien, when he gets dragged into praying to Jesus with a carload of enormous women at a Connecticut gas station. They're the most obvious targets for a mean crack you could imagine, but either O'Brien held his tongue after the episode was over or Flender had the good sense to turn the camera off. Either way it's one of those moments in documentary where you're grateful for a little restraint. He also tells the women that he feels ultimately grateful for getting fired by NBC, when he's spent much of the movie complaining about the "anger" and "despair" he felt after being paid tons of money rather than agreeing to move his TV show half an hour later. After the tour's over, he tells Flender, he needs to take some time off and reconnect, maybe drive his kids to school. Then he leans into the camera to correct himself: "Or have my agent drive my kids to school!" In fact, he started working on his new show for TBS almost immediately.