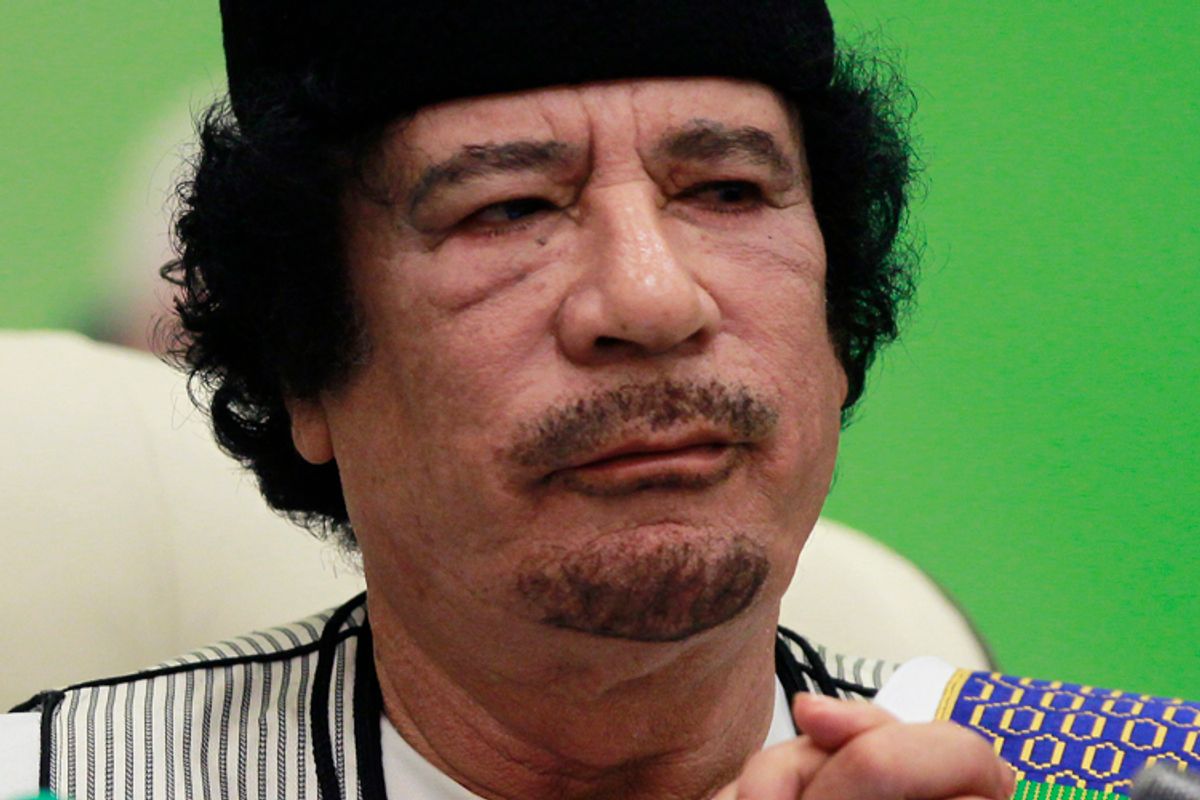 Libya's leader Muammar Gaddafi delivers a speech at the start of the third European Union-Africa summit in Tripoli November 29, 2010. Gaddafi warned the European Union on Monday that Africa would turn to other trade partners if the EU kept trying to dictate to the continent how it should develop. REUTERS/Francois Lenoir (LIBYA - Tags: POLITICS BUSINESS HEADSHOT) (Â© Francois Lenoir / Reuters)
--

Hillary Clinton, yesterday, when asked about those questioning the Libya War:

But the bottom line is, whose side are you on? Are you on Qadhafi’s side or are you on the side of the aspirations of the Libyan people and the international coalition that has been created to support them? For the Obama Administration, the answer to that question is very easy.

It's not only a plurality of Americans who are "on Gaddafi's side," but also the head of the Arab League, a short time ago held out as the Beacon of all that's Right (when they favored a no-fly zone).  And also Democratic Rep. Lynn Woolsey.  And our NATO ally Italy.  Who knew Gadaffi had so many friends, allies and fans?  There's almost as many of those as there were Saddam lovers (also known as "Iraq war critics").

I noted yesterday that the administration's rhetoric in attacking Libya war critics was becoming more and more identical to the Bush administration's on Iraq; apparently, the more unpopular a war gets, the more desperate and bullying the White House's attacks on critics become.  But Clinton's full quote is so thoroughly Rovian and noxious -- positing that there are two choices and only two: either enthusiastically support their war or be condemned as pro-Gadaffi -- that nobody, regardless of one's views on the war, should tolerate it.  Recall what ThinkProgress accurately said in 2010 about attacks from Bush followers on Iraq war critics:

We saw similar arguments leveled against critics of the Iraq war -- first that, by questioning the case for war, they were "objectively pro-Saddam," and later that, by continuing to criticize the war as it went worse and worse, they were emboldening insurgents.

An anonymous Obama official yesterday accused war critics of emboldening Gadaffi, and now it turns out Secretary Clinton accuses them of being on Gadaffi's side.  How much longer until we hear "who cares?" in response to polls showing widespread opposition to their war?

"I really consider President and Mrs. Mubarak to be friends of my family" -- Hillary Clinton, March, 2009.

Bill Clinton's presidential library raised more than 10 percent of the cost of its $165 million facility from foreign sources, with the most generous overseas donation coming from Saudi Arabia . . . The royal family of Saudi Arabia gave the Clinton facility in Little Rock about $10 million, roughly the same amount it gave toward the presidential library of George H.W. Bush

There are some people in the world with the moral authority to accuse others of being too close to and supportive of brutal tyrants.  Hillary Clinton is most definitely not on that list; in fact, she is very near the top of those who have no authority whatsoever to spout that accusation.  Those questioning the war aren't declaring Gaddafi to be " friends of their family" or taking millions of dollars from his regime; they're simply questioning the legality, wisdom and morality of the war.  Doing that does not put one on Gaddafi's side any more than doing it in 2003 put one on Saddam's.

I am sick and tired of people who say that if you debate and you disagree with this administration, somehow you're not patriotic, and we should stand up and say, 'WE ARE AMERICANS AND WE HAVE A RIGHT TO DEBATE AND DISAGREE WITH ANY ADMINISTRATION!'

But that was so then, and this is now.


UPDATE II:  Gadaffi-lovers now also comprise a majority of the U.S. House of Representatives, including dozens of Democrats:

The House dealt a symbolic blow to President Obama on Friday by resoundingly rejecting a bill that would authorize the contentious operations in Libya. . . . The resolution to support the mission failed 295 to 123, with 70 Democrats joining Republicans in a pointed show of defiance to Mr. Obama.

While the House also rejected a bill to limit the funds the President can use for the war (in part because hard-core war opponents, such as Dennis Kucinich and Ron Paul, voted NO, on the ground that the bill still allowed some funding for the war), both the War Powers Resolution and the U.S. Constitution are clear that wars require Congressional approval.  And now Congress has just explicitly voted against authorizing ongoing military operations in Libya. Yet, apparently, they nonetheless will continue.  Has there been another time in American history when a President waged a war even after Congress expressly voted against authorizing it (adding: in 1998, the Senate voted to authorized Clinton's Kosovo war bombing, but the House, by a vote of 213-213, failed to do so, yet the bombing continued for roughly six weeks)?