Pick of the week: The tender, haunting Mexican "Leap Year" explores a woman's life and a kinky S/M affair 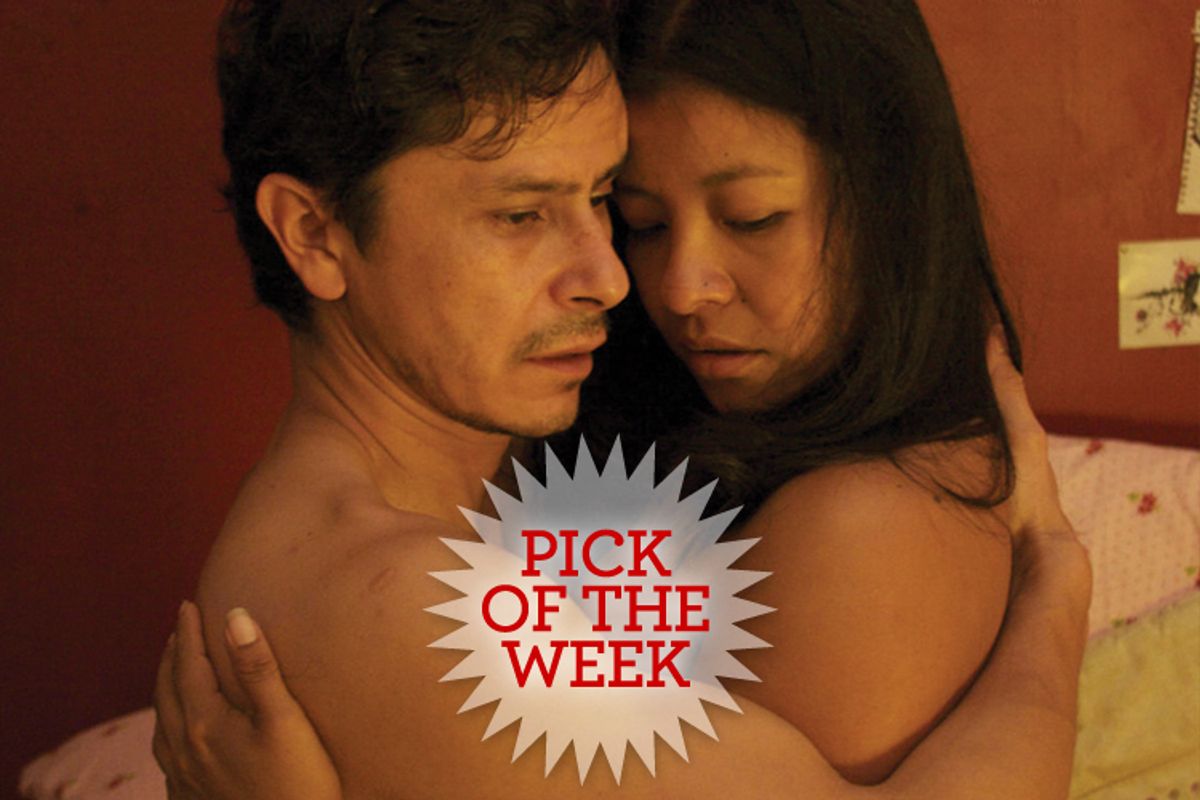 We're probably better off not working too hard to interpret Michael Rowe's claustrophobic, erotic, ships-in-the-night drama "Leap Year." This is a movie that might well lend itself to some heavy-duty analysis, whether that means post-Freudian gender-studies hoo-ha or post-colonial racial theory. But even by bringing that stuff up I run the risk of making "Leap Year" seem impossibly dreary, when in fact it's a gripping, mysterious use of no-budget cinema at its finest, and an intimate character study with surprising emotional power. (Be advised that there was another movie made in 2010 with this title. This one does not have Amy Adams in it.)

This is a work of almost ascetic severity, shot entirely inside the Mexico City apartment of a freelance journalist named Laura (played by the marvelous Mónica del Carmen). But somehow "Leap Year" uncovers an entire world, recounting a sweeping psychological narrative of a woman's descent into delusion, sexual obsession and self-destruction and then her voyage out again. Focusing on the details of everyday life with a camera that rarely moves, Rowe manages to make Laura's story both gripping and dramatic. Cinephiles will surely recognize the influence of, say, Yasujiro Ozu, Chantal Akerman and Roman Polanski here, along with the sexual frankness of '70s and '80s European film, but it's not like you need a graduate degree to absorb this simple, direct and almost wordless tale. (Several critics have compared this to "Last Tango in Paris," and while I guess that's inescapable it's not fair to either film.)

"Leap Year" won the Caméra d'Or at Cannes last year (given to the festival's best debut film), and many people were startled to discover that a film that seems so steeped in the subtleties of class, race and culture in Mexico was directed by an Australian. It's probably fairer to say that Rowe has an immigrant's sensibility: He's been living and working in Mexico for 17 years, and wrote the script in Spanish (with co-writer Lucía Carreras), but the ruthless observation in "Leap Year" also has a feeling of outsiderness. His central character, Laura, is a bit of an outsider too, even if she looks stereotypically Mexican. She's a dark-skinned mestiza (meaning that her features and physique look more Indian than European), short in stature, with a curvaceous frame. But she's also an educated, middle-class professional who has left her home village in Oaxaca far behind. She spends her days doing piecework journalism on the Internet, and her nights either masturbating while watching her married, affluent neighbors across the street or bringing home men she'll never see again.

There's a sharp distinction between Laura's life as she'd like to imagine it and as it really is, something I expect everyone who's ever lived on their own in a big city can identify with. She tells her mother she's having dinner with a friend when she's watching TV, and that she's cooked a steak when she's having beans out of the can. For one of her lovers she spins out an urban fantasy about her apartment building: How she sometimes has coffee with the older couple who live downstairs, or takes the kids from No. 6 to the fair when their parents are busy. None of it's true; as far as we can tell she doesn't even know those people. But at least she's talking to this guy. We never see the face of the first guy she brings home (Juan Manuel Sepúlveda's camera stays focused on a cockroach scuttling across the floor, perhaps too symbolically), and the second one only speaks when he's calling to reassure his wife that he's on his way home.

The one she ultimately talks to is the first one to volunteer his name, Arturo (Gustavo Sánchez Parra), and he's the tall, imperious, European-looking type that Laura clearly prefers. Rowe has said that the racial element of the story is important, and it's certainly a definitional element of Mexican life, albeit one that usually isn't discussed. He also likes it rough, and while we're just talking about R-rated kink at first (spanking and so on), Laura likes it and is eager for him to push further. A whole lot further, as it turns out, further than Arturo necessarily wants to go. The sex scenes in "Leap Year," by the way, are explicit and realistic, but a bit detached and not purposefully alluring. (This also isn't "real" sex, in the sense of those quasi-pornographic French art films.) Sepúlveda's camera remains at a distance, whether Laura and Arturo are screwing or role-playing or just snuggling on the sofa, which is where they break the real taboo between them.

Rowe's point, as I take it, is that the real danger for a solitary urban woman like Laura is to reveal your need and loneliness, your desire for an intimate connection that will break through the atomized, depersonalized landscape. Letting a guy you barely know whip you with his belt will leave some bruises, but those will heal in a few days, while the consequences of emotional vulnerability can be genuinely catastrophic. Let me reassure you that while "Leap Year" goes to some profoundly troubling places, it's not, in the end, some utterly dark fable of misogyny or nihilism. Arturo is a cipher or a mystery -- Laura doesn't learn much about him, and may not want to -- but he isn't a monster, and there's a desperate, haunting tenderness to their story of uncontrollable love and its ending.

"Leap Year" is now playing at the Cinema Village in New York, and opens July 1 at the Laemmle Sunset 5 in Los Angeles, with more cities and DVD release to follow.