From Cassavetes to "Wings of Desire," the growly, one-eyed actor was much more than Lt. Columbo 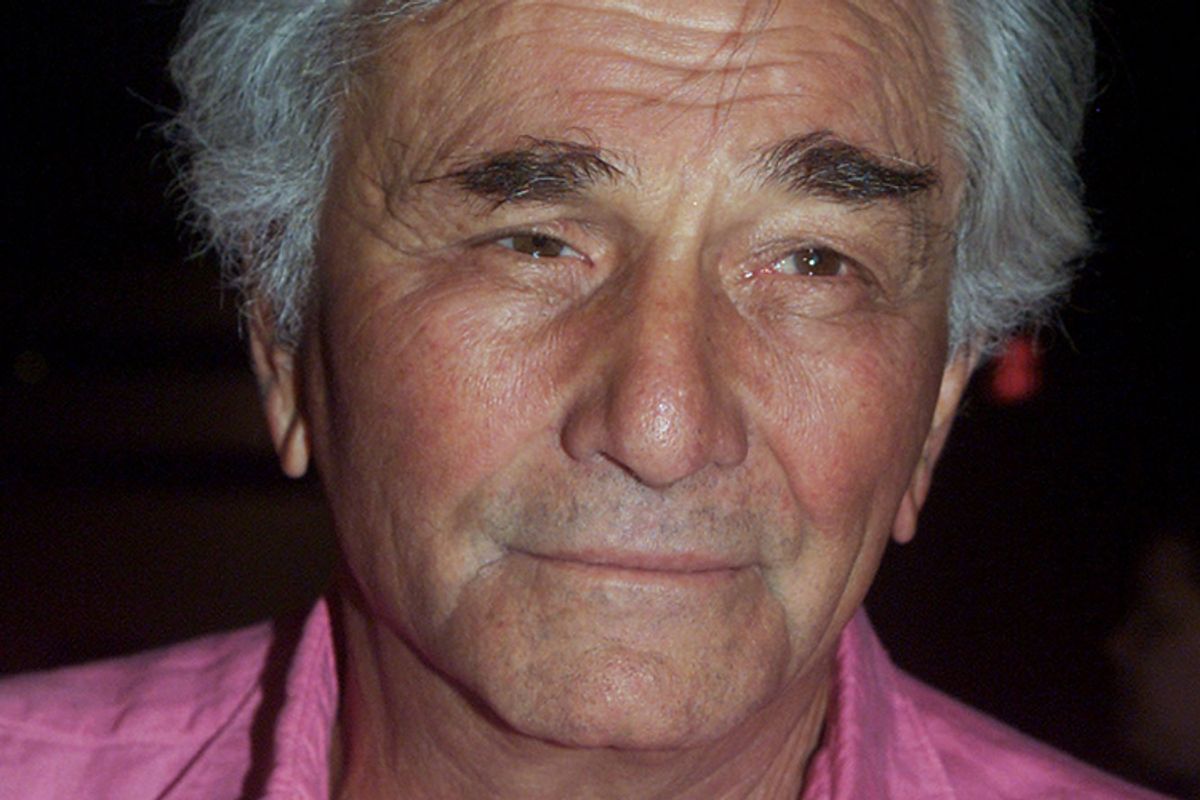 Actor Peter Falk poses as he arrives for the premiere of his new film "Lakeboat" September 24, 2001 in Los Angeles. [The film is an adaptation of David Mamet's Pulitzer Prize winning comic play about a grad student who takes a summer job on a Great Lakes freighter and sees life through the eyes of his low-brow crew members.The film opens in limited release in Los Angeles September 28. ] (Â© Rose Prouser / Reuters)
--

I met Peter Falk only once, more than 20 years and dozens of performances ago, when he was barely 60 but struck the juvenile version of me as an immensely battered ship's figurehead, a wise and soulful spirit who had weathered the wild storms of artistic greatness and the flat tides of showbiz mediocrity. It was not long after he had played a version of himself as a former angel (called in the credits "Der Filmstar") in Wim Wenders' gorgeous "Wings of Desire," and at almost the same time had shaped a different generation's sensibility as the grandfather/narrator of "The Princess Bride."

He talked about how much he missed his friend and collaborator, indie-film pioneer John Cassavetes, who had recently died. But when I asked Falk whether he'd rather be remembered for his performances in Cassavetes' "Husbands" or "A Woman Under the Influence" than as the professionally befuddled Lt. Columbo of TV fame, he gave me a tolerant smile. I've long since lost any transcript of this interview, but as I recall it now, he said that Columbo had been very good to him, and he was very grateful. If the public wanted him to play that guy for the rest of his life, he was fine with it.

Falk, who died on Thursday at age 83 in Beverly Hills, Calif., after apparently suffering from dementia for several years, didn't literally play Columbo for the rest of his life, but pretty darn close. (The last "Columbo" movie aired in 2003.) Appearing as the rumpled detective in 69 inverted-structure TV episodes and movies over a 35-year period -- the "Columbo" formula has been described as a "howcatchem" rather than a whodunit -- the sandpaper-voiced, one-eyed New York native permanently imprinted himself on pop-culture history and thoroughly overshadowed the rest of his career. You can argue that that's too bad, if you must, but mostly it's amazing. Falk's TV role as a deceptively disheveled L.A. cop lasted much longer than Heath Ledger's or Kurt Cobain's (or Mozart's) lives.

It's certainly true that Columbo wasn't Falk's most emotionally challenging or dramatically audacious role, but like most actors of his generation he was delighted to keep working, and had no illusions that he could control the quality of the finished product. This was a guy who spent years during the middle of his career playing bit parts in now-forgotten TV series -- "87th Precinct," "Wagon Train," "The Dick Powell Theatre" -- and only gradually worked his way back into movies. Getting cast in the first Columbo TV movie ("Prescription: Murder" in 1968) when he was already over 40 was a huge break, and one Falk apparently never forgot.

Before his Columbo comeback, in fact, Falk's career as a star appeared to be over. He had tasted sudden success in his early 20s, getting cast from a Manhattan cattle call for the role of coldblooded killer Abe Reles in the 1960 film "Murder, Inc.," and then garnering an unexpected Oscar nomination. New York Times critic Bosley Crowther described Falk in the film as "moving as if weary, looking at people out of the corners of his eyes and talking as if he had borrowed Marlon Brando's chewing gum." Falk was nominated for best supporting actor again the next year for his role in Frank Capra's final film, "Pocketful of Miracles." But that movie was a flop, and while Falk went on to win five Emmys he had trouble getting film roles, and would never get near an Oscar again.

When "Columbo" became a regular television series in 1971, its first episode was directed by a 25-year-old unknown named Steven Spielberg, whom Falk identified immediately as a remarkable talent. He told a Spielberg biographer two decades years later, "This guy [was] too good for 'Columbo' ... Steven was shooting me with a long lens from across the street. That wasn't common 20 years ago. The comfort level it gave me as an actor, besides its great look artistically -- well, it told you that this wasn't any ordinary director."

By that time, Falk was already working in two worlds at the same time, playing a television detective on the West Coast while working with the New York-based Cassavetes on wrenching roles in the semi-improvised works "Husbands" and "A Woman Under the Influence." Those films sharply divided critics at the time (neither Pauline Kael nor Roger Ebert could stand "Husbands"), and still don't have anything like a popular following, but are widely viewed in critical and academic circles as seminal works of American independent cinema. But while Falk and Cassavetes remained friendly -- and the latter even guest-starred on a "Columbo" episode -- their collaboration seemed to burn out after those two movies, and most of Falk's later films were more conventional Hollywood material.

Other than his iconic near-cameo in "Wings of Desire" and the narrator role in "Princess Bride," in fact, Falk's post-Cassavetes and non-Columbo career wasn't especially memorable. He starred in Elaine May's "Mikey and Nicky," which is something of a cult comedy classic, and was completely hilarious as an unhinged ex-CIA agent in Arthur Hiller's "The In-Laws." But whether or not his movies are any good (and a lot of them aren't), you never get the feeling Falk is coasting on his gruff and growly manner. Take a total throwaway like 2005's "The Thing About My Folks," where he was almost the only thing that made it watchable. (Do not, however, watch Falk in "Three Days to Vegas" from 2007; it's not fair to remember him that way.) Like Lt. Columbo, Falk was a consummate professional, responsive to every moment. He could turn a scene to comedy or tragedy (or both) while apparently doing nothing. We are poorer without the man, of course, but in another sense he'll be with us a long time: Turning to leave, then hesitating and turning back to ask one more question, a mischievous certainty in his eye.

Here's a clip of Falk from "Wings of Desire," for your viewing pleasure.