Congress vs. the president on war powers

The significance of yesterday's Libya vote shouldn't be minimized. Plus: Reaction to same-sex marriage in New York 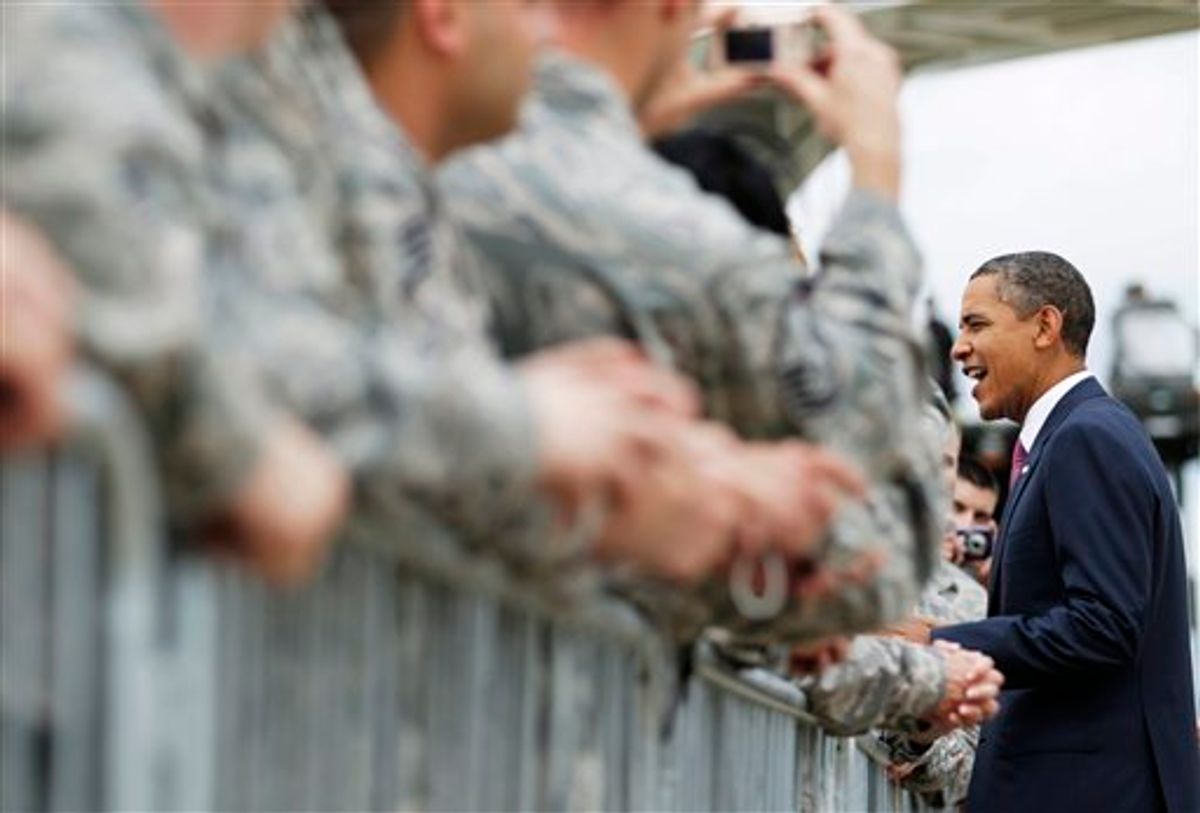 "Broadening our military mission to include regime change would be a mistake" -- President Barack Obama, March 28, 2011, describing to the nation the U.S's role in the War in Libya (more than a week after he began it).

"The White House strongly denied Tuesday that regime change is part of its mission in Libya . . . . Ben Rhodes, a deputy national security adviser, issued a statement acknowledging that President Obama would like to see a democratic government in Libya, but explained that the aim of the U.S. military’s intervention there is not to enact regime change. 'We're clarifying, as we’ve said repeatedly, that the effort of our military operation is not regime change,' Rhodes said" -- The Hill, March 22, 2011.

Would this be an example of a President misleading the nation into an (illegal) war?  Or did the goal of the war radically change oh-so-unexpectedly a mere few weeks after it began?  Everyone can make up their own mind about which is more likely.

Yesterday's strange House vote -- rejecting an authorization for the war in Libya but then also rejecting a bill to partially de-fund the war -- has produced substantial commentary, much of it misguided.  John Cole and Matt Yglesias, for instance, both depict the seemingly inconsistent Congressional vote as one of incoherence and cowardice, with Yglesias in particular arguing that it vindicates his view (one I never heard from progressives in the Bush era) that "it’s not so much that we have executive branch power grabs as it is that congress pretty consistently fails to use the leverage that it actually has."  I don't disagree with the general view of Congress as cowardly and misfeasant in its duties, but yesterday's vote is actually not an example of that -- if anything, it's an example of the opposite -- and there are two important points about that vote that should be highlighted:

(1) The so-called "de-funding" bill the House rejected yesterday was not really a de-funding bill.  It would have barred the spending of money for some war purposes, but explicitly authorized it for others.  That's why, as Foreign Policy's Josh Rogin reports, dozens of anti-Libya-war members in both parties voted NO on the de-funding bill:  not because, as Cole and Yglesias suggest, they were cowards who did not have the courage of their anti-war convictions; and not because the bill would have approved some spending for a war they oppose (though that is true), but rather because they were worried (appropriately so) that had that "de-funding" bill passed, Obama lawyers would have exploited it to argue that Congress, by appropriating some money for the war, had implicitly authorized Obama to wage it:

The vote failed 180-238 - but, in fact, there were more than enough lawmakers to pass the measure. Of the 149 Democrats who stuck with the president, up to 70 of them are totally opposed to the Libya intervention and want to see it completely defunded as soon as possible. They voted "no" on the Rooney's bill because they thought it was too weak, did not cut off all funds, and implicitly authorized the intervention. . . .

"Members of Congress voted no because the bill provided funding and legal authority for everything we're currently doing. It was back door authorization. Members didn't support authorizing what we're doing now in Libya," Michael Shank, Honda's spokesman, told The Cable. "The majority of the CPC voted no on the Rooney vote because of this."

In other words, if the GOP had put forth a stronger anti-Libya resolution, the progressive Democrats would have joined them and it would have passed. Despite what Clinton or other administration officials may say, the bill's failure cannot be seen as an endorsement of the Libya war.

Some anti-war Democrats (such as Kucinich) nonetheless voted for the de-funding bill, and while I can see the case for doing so (namely, even this partial de-funding would have at least ended the drone attacks and barred future escalation), the anti-war members who voted NO on partial de-funding had very legitimate reasons for doing so.  After all, the Clinton administration -- after the House failed in 1999 to authorize bombing for the Kosovo war -- continued the bombing anyway by claiming the House had "implicitly" authorized that war by appropriating some funds for it, and Obama White House lawyers would have almost certainly made the same exploitative claim here.  As Ron Paul -- echoing the spokesperson for House progressives -- said in explaining his NO vote on "de-funding", the bill "masquerades as a limitation of funds for the president's war on Libya but is in fact an authorization for that very war. . . . instead of ending the war against Libya, this bill would legalize nearly everything the president is currently doing there."

That was the reason so many anti-war members of Congress -- including dozens of progressives -- rejected the "de-funding" bill despite opposition to the war in Libya: because it was a disguised authorization for a war they oppose, not because they cowardly failed to check executive power abuses.  As Rogin reports, "there were more than enough lawmakers to pass" a true de-funding bill, but GOP leaders -- who have been protecting Obama on Libya from the start -- did not bring that to the floor.

(2) The significance of yesterday's vote is substantial and should not be minimized.  Congress does not need to de-fund a war to render it illegal.  Under the law (and the Constitution), military actions are illegal if Congress does not affirmatively authorize them (either within 60 days or at the start, depending on one's view).  The fact that the President has failed to obtain that authorization renders his ongoing war-waging illegal -- period.  And the fact that the House has now affirmatively voted against authorizing a war that is underway is a very rare and strong step to oppose a sitting President's war policy.  That the vote was so bipartisan only elevates its significance.

It's true that de-funding is one mechanism for Congress to enforce the law when a President wages an illegal war (impeachment is another).  And while Congress' failure (thus far) to take enforcement steps is worthy of criticism, that does not, as Yglesias seems often to suggest, remotely justify or even mitigate the President's lawelessness.

Lawbreaking is not justified or mitigated because the lawbreaker is not caught or punished.  If a community is plagued by a violent crime wave in response to which the police are insufficiently vigilant, one can (and should) criticize the police's passivity, but that doesn't serve to justify or excuse the conduct of the criminals.  Congress, under the control of both parties, was at least as passive in the face of chronic Bush lawbreaking (Dan Froomkin, 2007: "Historians looking back on the Bush presidency may well wonder if Congress actually existed"), and while many people (including me) harshly criticized Congress for that inaction, I never heard anyone suggest that the failure of Congress to stop Bush lawbreaking somehow mitigated the seriousness of Bush's lawbreaking or meant that the bulk of the blame lay with Congress.

That's where Yglesias and others who seek to shift blame away from the President to Congress have it wrong.  We have both "executive branch power grabs" and a "congress [that] pretty consistently fails to use the leverage that it actually has."  Yesterday underscored the former far more than the latter, as there are few things more serious than a President's waging an illegal war, and few Congressional actions quite as bold as yesterday's vote.

My reaction to last night's enactment of same-sex marriage by the New York State legislature is more personal than political, so I'll defer to Andrew Sullivan -- one of the nation's earliest advocates of gay marriage -- to explain its significance.  But I can't let this rare genuine political progress go unmentioned, so I will share one reaction:  in 1991, when I was a first-year law student at NYU, I regularly attended, for about a year, meetings and demonstrations of ACT-UP.  I was a passive observer, but very impressed and inspired by the unyielding refusal of gay men with AIDS in that era (in indispensable conjunction with lesbian activists) to passively accept their consigned fate and their status as marginalized, condemned outcasts: the expertise in politics and medicine they developed, the creative and brave civil disobedience they pioneered, and the force of collective will they mustered under the most trying of circumstances was nothing short of extraordinary.

The first meeting I ever went to was attended by Tom Duane, who spoke to the group.  At the time, Duane was seeking to become not only the first openly gay man elected to the New York City Council, but one of the first openly HIV-positive candidates to be elected to any political office.  Remarkably, Duane won, went on to be elected to the State Senate in 1998, and last night -- 20 years older and now a veteran establishment Democratic lawmaker in Albany -- he was at the emotional center of that vote.  It's hard to describe how inconceivable such an event was back in 1991 -- it was barely the end of the Reagan era, when "gay" and "AIDS" were still unmentionable in much decent company and much of gay activism was more about finding a way to survive (literally) than anything else -- but the fact that this amazingly improbable event just happened should (like the events in the Middle East) serve as a potent antidote against defeatism.  Significant and seemingly impossible social and political change happens more often than we think, and it happens more rapidly than we realize.  Even the most momentous change is always possible if one finds the right way to make it happen.