Is there a cure for "The Big C's" cheeriness? 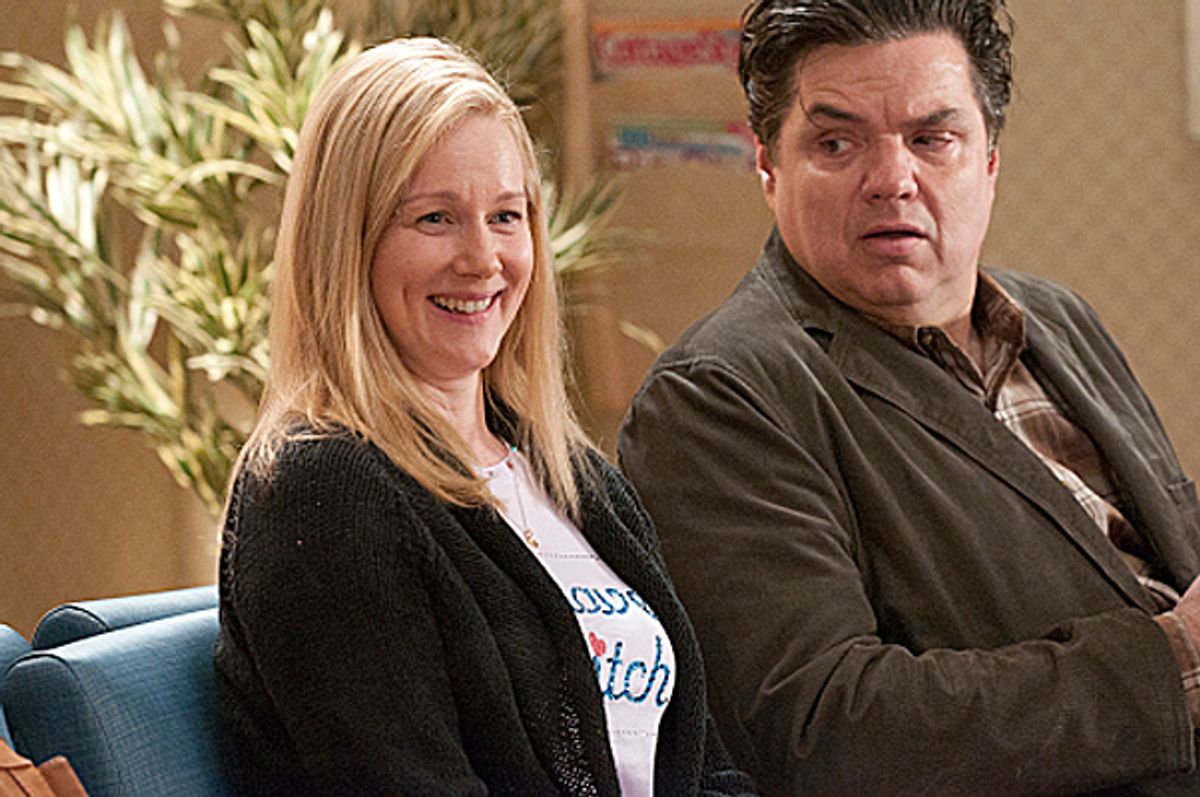 Cathy Jamison is one chipper cancer babe. In the first season of 'The Big C,' Laura Linney played a middle-aged woman with stage 4 melanoma with all the plucky abandon and sage insight that popular culture loves to assign to the terminal. Faced with a grim prognosis, Cathy loosened up while remained tight-lipped about her condition to even her family. For the new season, her secret is out and she's motivated herself to give this life thing a go, but her flinty moxie remains intact. Yet living with cancer, it turns out, can be almost as rough as dying from it. Cathy now faces the unpleasant side effects of treatment, the desperation of trying to get an appointment with the local superstar cancer doctor, and, significantly, the outbreak of weirdness in her inner circle as her loved ones come to their own grips with her condition. Oh, and her dead neighbor Marlene is haunting her.

I'm not the most unbiased critic of "The Big C" -- which is exactly why I'm critiquing it now. Last year, five days before the show's much-hyped debut, I was diagnosed with my own malignant melanoma. Fortunately, my personal plotline has been far less pessimistic than the fictional Cathy's, but I've nonetheless followed the show with all the fascination with which I imagine a cantankerous pill-head doctor gobbles up "House."

I don't expect gritty realism when I watch TV -- having been single in New York, I can assure you "Sex and the City" was no freaking documentary -- but I do think it's fair to say that one doesn't tune in to a show about cancer entirely for escapism. And in its new season, "The Big C" is still clearly trying to stride the line between the honest depiction of an experience far too many us know intimately, and just a wacky sitcom with tumors.

We catch up now with Cathy a few weeks after the revelation of her condition to her husband, Paul, and teenage son, Adam, a shift marked by the bright, crisp colors of fall. But Cathy's still figuring out how to break it to her bipolar brother, who's now contending with his own impending parenthood. She's also taking up her doctor on his advice to go ahead and use marijuana as pain reliever, which leads to a schoolgirlishly giddy drug deal.

Last year, I thought the show's greatest weakness was Cathy's baffling choice to act out while not explaining herself. Much of the most interesting stuff surrounding a devastating disease is what it does to the people around you. And in that regard, "The Big C" shows improvement over last season. Cathy is now not just grappling with how her son might go on without her, but angsting over how he's supposed to cope with her condition. And her relationship with Paul is a showcase for the surprisingly sweet romantic bonding experience a life shaking illness can become. I just can't stop wishing Cathy herself were less cheerleader-level annoying.

Played by Linney, there's something irrepressibly sunny about Cathy, even when she's whacking a broom at the wisecracking ghost of Marlene, mouthing off to her brother that "I'm fighting for my life, not yours!" or pitching a fit in a doctor's waiting room. I get that she's supposed to be a fundamentally nice, sandwich-making suburban mom and schoolteacher groping her way through the brutal new landscape of sickness. And I'll grant that because I've seen it in my own eyes, and those of a close friend currently in treatment for ovarian cancer, I'm more familiar with what the relentless, day-to-day emotional butt kicking of cancer looks like. But as a viewer, I can't help sense Linney (who is also an executive producer) and her writers striking an alienating, forever-smilin'-through-the-tears chord here.

In its smaller scenes -- in the slog of dealing with insurance claims and waiting around in paper gowns for a 30-second consult -- the show shines far more promisingly than in its showstoppers. Cathy's deadpan "You've been very helpful" to an expert who has just stated the obvious is exasperated perfection, and a POV scene of both Cathy and her son facing a daunting gauntlet of quietly pitying faces in the second episode should be part of the welcome packet for everyone who's just found out they have cancer. It's in those moments that "The Big C" shows glimmers of being truly brave, risky television, by virtue of its sheer simplicity. Our mortality is a rich inspiration for entertainment -- look at how shows as disparate as "Six Feet Under," "Dexter" and "True Blood" captivate us with their grandly lurid depictions of life and death. But convincingly, wittily depicting the terrible ordinariness of it? That's so much harder to get right.