The new season of HBO's vampire soap opera begins with a fairies, witches -- and some big twists 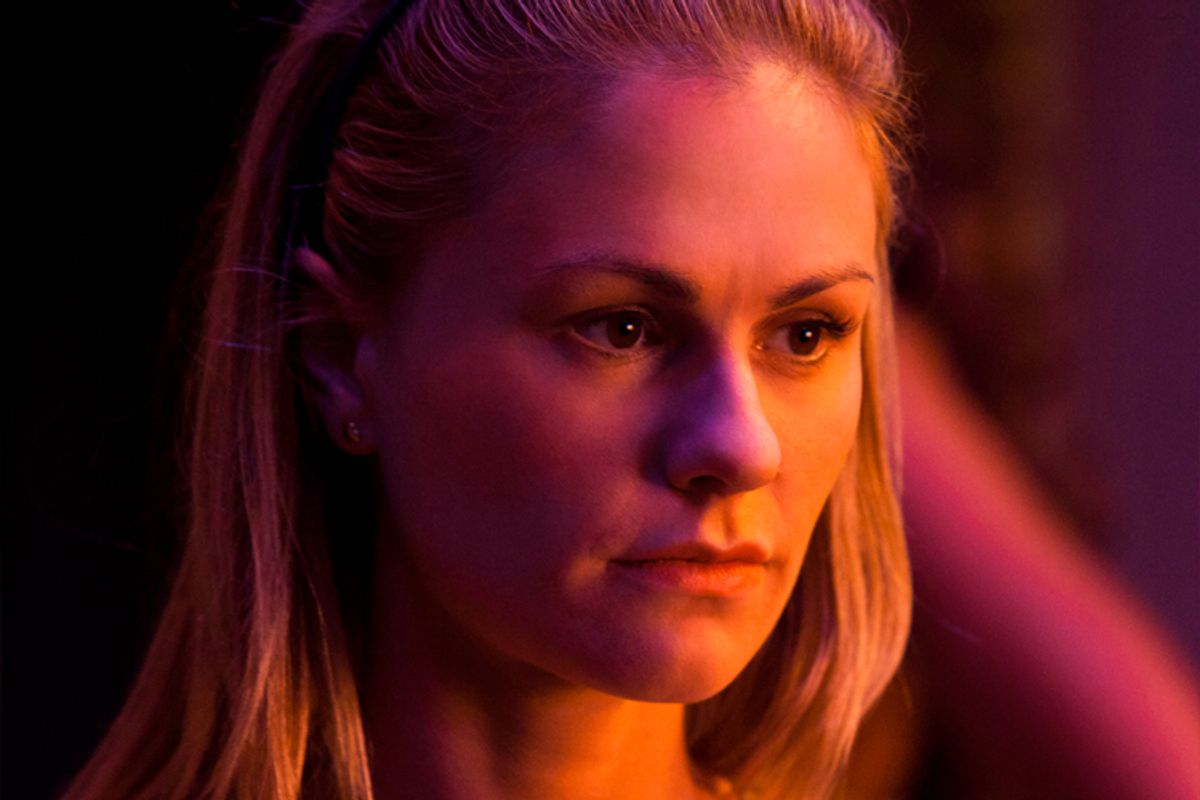 Do you remember the first season of "True Blood?" It was so good! It combined the elements of a dark Southern gothic Anne Rice novel with the pop-culture savvy of Joss Whedon's "Buffy." It was by turns sad, funny, and really scary (kind of like Ball's best work to date, "Six Feet Under"). I was initially resistant to watching "True Blood" because I had heard all the silly accents in the trailer and it just wasn't my thing, but I defy anyone to watch the title sequence of that show and not get hooked by the disturbing imagery coupled with the sinister riffs of Jace Everett's "Bad Things."

Unfortunately, "True Blood" has gone consistently downhill since its inception. I can buy into maenads, vampire caste systems, and religious right megacults, but not when the whole package is shoved into an hour-long episode. By season three the writers were throwing everything but the kitchen sink into the mix to make up for the lack of emotional depth or nuances in their now cartoonish characters. From a show about vampires, it turned into a cabaret of werewolves, were-jaguars, kings and queens, vampire PR syndicate, warlocks ... you name it. Oh, and Sookie was part fairy, as it turns out. There was too much going on; too many plotlines and political allegories and characters popping up out of nowhere, to give the show the emotional resonance of that first season episode where Sookie comes home to find her grandmother murdered. When the trailer for the fourth season came out with Sookie saying, "Oh great, now I have to deal with witches too?" I was right there with her.

Still, "True Blood" remains a guilty pleasure, and while watching the premiere there was still that glimmer of hope that maybe half of Bon Temps would die in a fire, and we could cut the cast down by half. Instead, we were introduced to fifty new characters, and only one death. Boo!

We open with Sookie going flash-sideways into fairyland, which is how we ended the last season. Fairyland is all shimmery and awesome; a place where everyone is beautiful and eating glowing fruit. We know this means trouble, since Maryann from Season 2 also threw beautiful parties with lots of fruit, and that was because she was actually an immortal follower of the greek god Dionysus, who eventually took over the entire town with her Ecstasy-raves and blood sacrifices. Hate it when that happens.

Sookie's fairy godmother Claudine is already kind of pissed, because even in paradise Sookie is bitching about how this woman sucks at her job. Give it a break, Sookie! I don't see anyone coming down to Merlotte's and telling you how to be the world's worst waitress.

Also at the fairy party is Barry the Bellhop from season two, who could read minds as well. His godmother is a Calvin Klein model named Lloyd or something. Barry is super-happy to finally be in a place where he doesn't feel like a freak. Sookie wants to ruin that feeling as soon as possible but … what's that over there? Why, it's Sookie's grandfather, Bill Lumbergh from "Office Space." He doesn't remember Sookie, but he's going to need those T.P.S. reports by this afternoon.

Apparently time moves differently in fairyland, so even though Mr. GrandSookie has been missing for 20 years, he thinks he's only been chilling out in the magic kingdom for a couple hours.

Sookie, realizing something's afoot, tries to psychically warn her granddad to get out. Whoops! Turns out all fairies can read minds, and suddenly this garden of Eden is less awesome. There is a queen fairy who tries to force Sookie into eating a lumière (lightfruit!), but Sookie realizes that these delicious glowing snacks are actually people? Or people's souls? Maybe? And that the fairies have been harvesting these souls to feed themselves? ** Okay, that in itself is enough exposition to warrant an entire season, but this being "True Blood," we're still at the 10-minute mark.

Sookie and her granddad escape the fairyworld, which starts crumbling and revealing the fairies to be some extras from "The Witches," and land back in reality. But since pop-pop had been eating from the lightfruit, he immediately dies upon his return. Okay! Good to have seen you, Mr. Stackhouse! This is what I'm talking about in terms of the show's pacing: it's hard to feel bad when Sookie cries over her granddad, because we literally just met this guy. The implied logic is that granddaddy, Sookie (and Barry) are all part-fairy, which is why they can read minds. But Claudine, also a fairy, seems to be able to hang out in the human world just fine despite ostensibly eating human soul fruit. So why did it kill Mr. Stackhouse? Who knows. Moving on.

Sookie cries a bit, and then goes home, which is conveniently located on the physical realm right where she jumped off a cliff in fairyland. Except her house is all different! People are cleaning it up and taking away the furniture, and some guy threatens to call the police on Sookie for trespassing and she sniffs, "Oh, I'd love you to!" Because everyone in town knows who Sookie Stackhouse is, you stupid contractor who is just trying to do your job!

Jason Stackhouse shows up, since he is a cop now, remember? Also, he has that Rob Zombie hillbilly family to take care of back on the other side of town ever since his meth-head incestuous were-jaguar girlfriend entrusted him with it, but that won't be mentioned till the end of the episode, since there are so many other plots to get through first! Like Tara is now a cage-fighter and a lesbian in New Orleans. Sam is in an anger management group after shooting his brother Tommy in the leg. Tommy now lives with Hoyt's mom (what?) and is pretending to be a good Christian boy. Sam's anger management group is actually a bunch of shape-shifting swingers that like to take off their clothes and turn into horses. (Which is odd, because two seasons ago Sam had never met another shape-shifter, and now there's enough to hold rotating weekly dinner parties?) Sheriff Andy Bellefleur is addicted to V! Arlene had her kid, which she thinks is evil because it is the son of Rene, the psycho-killer from season one. Her boyfriend Terry Bellefleur thinks she just needs to relax, but at the very least that kid is pissed that mom tried to abort it with black magic, so watch out Arlene!

Lafayette is living with his warlock boyfriend Jesus, who prefers to be called a "bruja" because he is Mexican. Oy. Jesus wants Lafayette to hang out with this very cool witch coven (that he had previously disguised as his yoga class and then his Wiccan group), which Lafayette is rightly suspicious of. Turns out the head of the coven is Aunt Dursley from "Harry Potter," and she summons the spirit of Milton from "Office Space" who was on the show's first season as one of Lafayette's vampire johns, Eddie. Ghost vampire Eddie gives Lafayette a ghost stapler rose, and Lafayette freaks out.

Also, Hoyt and Jessica live together now, but she won't cook him dinner.

But back to Sookie! Jason shows up and is inordinately happy to see her. He thought she was dead! Haha, stupid Jason, dumber than a bag of hair. How can Sookie be dead? She is the main character of a show that's not "Game of Thrones," and the show always implied that Sookie's powers were either the only thing keeping the town from falling into the hands of various monsters, or the reason all these baddies showed up in the first place. Sookie's existence is necessary for there even to be a "True Blood," (despite the hundreds of side-characters that also populate the show) because, as we've been told over and over, she is "special."

Then Jason tells Sookie that she hasn't been gone for two hours, or even two weeks. She's been missing for over a year. (Damn fairytime!) So for everyone in town, Sookie has been dead. And yet somehow they kept going on with their lives, without any major threats from vampires, werewolves, or supernatural beings? If you didn't think Sookie was useless before, this kind of proves it.

Of course, right after telling her this shocking news it is night time, and Vampire Bill and Eric use their vampire super-speed to drop by. Hi Bill! Hi Eric! Bill thought Sookie was dead! He couldn't "feel" her presence anymore, yet despite all the times he's tried to sacrifice himself for her, the knowledge of her death didn't make him stab himself through the heart with a wooden stake. Instead, he became King of Louisiana. Okay.

Eric, meanwhile, proclaims he never lost faith that Sookie was alive. She tells them both to GTFO, and Bill actually does, which pisses Sookie off because he's supposed to love her, damn it! Bill is kind of pimping as king though: Andy's sister keeps making moon-eyes at him, and he's banging a redhead who has infiltrated Jesus' witch coven. Way to grieve, Bill!

Eric pretends to leave, but then pops up after Sookie's late-night shower. Surprise! He's the guy that bought her house, and now she can't rescind her invitation and kick him out of the house via Vampire Logic. Loophole! That's the major cliffhanger of the episode: whether or not Eric will now kill Sookie and drink all her blood. (Also whether Jason can find himself out of the refrigerator that his Leatherface wards lock him in when he goes to bring them raw meat and ice-cream.)  I'm going to go ahead and say (spoiler alert) that unfortunately neither of these things are very likely.

** As a commenter pointed out, the "harvesting people" line may not be a reference to the lightfruit actually containing human-juice, but rather that all the half-fairies are being tricked into staying into the fairyrealm by eating the fruit. So whole-fairies are harvesting half-fairies? To what end, if not to eat them? Oh, this show. Your non-logic never ceases to amaze me.